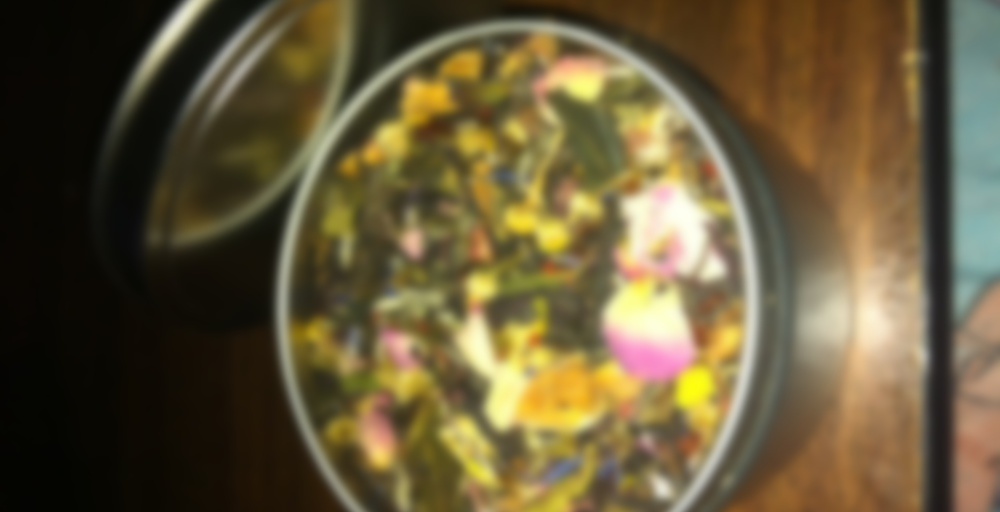 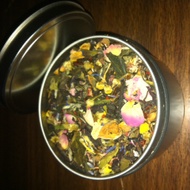 Yay another obscure tea from the Traveling Tea Box. Thanks to Sare for this one, though I would be very curious to know what she thought of it when I’m done. So this has everything and the kitchen sink in it. The base is white, black and red (rooibos) when every flower imaginable in it (okay not really, just four of them, though I swear I saw cornflower petals in there, I guess it could have been the lavender, nope nope double checked definitely cornflowers and lavender) plus black currant, raspberry and peach!

This smells fruit and floral, like a garden, in a fantasy, or like a Venus Gillette commercial, picture the flowers popping up and the trees fully blossoming, colors swirling and an incredibly smooth legged woman draped in periwinkle silk gliding through it all, you know you can. That is this tea.

It has a good amount of flavor going on, but it is very difficult to dissect. It’s a bit lemony and I’m definitely getting chamomile, but beyond that just generically fruit and floral. It also brews up beautiful tangerine color that turns peach as you sip on it on it.

I can imagine young girls in floral dresses and maybe even gloves, out to tea with their mothers or grandmothers like this. There’s nothing offensive about it and it naturally sweet. Quite nice for what it is though it turns out the smooth legged goddess decided to put on some stockings, a frock and a hat and showed up at high tea and sat down between two ten year old girls and told them stories that make them giggle.

lol im so glad you liked it this is the one i could not stand….