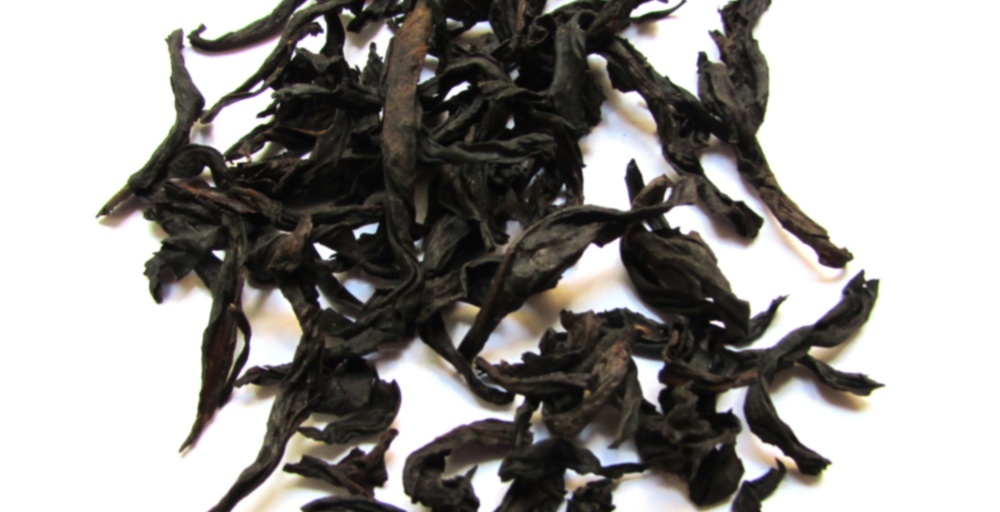 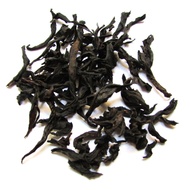 Cinnamon taste with a sweet finish.

Yet another tea and music pairing a la Roswell Strange.

It is a very sexy song. That’s a weird description, I think but you’d get it if you listen to it. That sort of sexy romanticism of the deep yet smooth voice picks up the sleek floral quality of the oolong base while also capturing the bit of smoke the base provides as well. Meanwhile the warmth of the song coupled with the voice reflects the cinnamon richness of the tea. Both the song and the tea have a nice honey-like top note to really round them out.

I don’t have much more to say about this except both the tea and the song were completely new to me and surprisingly pleasant. I am not a lover of oolong and the song had an intro that had me questioning what was to come but I was definitely happy with both. Plus, they compliment each other nicely. Another successful pairing by my awesome tea twin. Thank you RS!!

Yes, exactly! This is sexy, romantic dancing in your living room at 2AM with your soulmate sort of music; it’s a big, warm toasty intimate hug – just like the tea :) Really glad you loved the song. And the tea, of course. Knew I was taking a risk with that one.

Hmm. a bit on the fence with this one – I tried my usual Oolong comparing test, western style, which is how i usually like them to be drunk, letting the flavour change as they cool in a big mug with a book.

but it tasted a bit oversteeped this way. there was an astringency and dry aftertaste that reminded me of being too far done. Im not going to rate this until I try it gongfu and/or less

I kind of felt the same way about this one. Not a big fan of it.

Had a bit of a sloppy Gong Fu session with this during class today; it was a little tough to pay attention to both the infusing tea and what my instructor was saying. Plus, preparing everything on my tea tray/lap whilst sitting on my bed and not at a table probably didn’t make things any easier.

I liked the infusions I did though: my attention was focused else where but I remember the nutty, roasty notes quite clearly as well as the slight taste of ash/char which eased up later into the class/with subsequent infusions and instead show cased lighter notes of cinnamon and vague fruity notes. Or maybe the fruit notes weren’t vague, and I was just focused elsewhere. That’s totally a fair assumption.

I still haven’t written notes on last week’s tastings/class (the notes are buried in my queue somewhere – I’ll probably write about it tomorrow), but today’s class focused on the things that have to be legally included/declared on commercial tea packaging in Canada and on Nutritional Labels. Honestly, it was a little boring and hard to give my undivided attention as that information doesn’t really capture my interest strongly and isn’t information I’ll probably use on a more daily basis…

And next week is the final for this module! No cupping this time around, but I do need to design a tea related product in the next week for my final project. So far, I’m leaning on a ‘mock line’ of Tea Infused Soda since I feel like I can pull from personal experience making tea pop, and I know some of the Canadian consumer statistics we looked at discussed “ready to drink” teas as well as the sales of tea in relation to soft drinks. My logic for choosing “tea pop” as my product being that I can appeal to both the soft drink market and the tea market.

Wow, you’re doing a course on tea? What is it exactly?

I’m getting my Tea Sommelier certification :)

Now that, is dedication

Gongfu, 190, 4g tea, one rinse. 30 seconds. Dark brew, almost coffee-like. An aroma I cannot define. Oh wait, it’s honey I think. I do taste a little sweetness. I definitely taste the char. And the hint of cinnamon. Very robust. Peppery. I will have to try this grandpa style; it is probably quite strong that way. Second steep one minute. I can feel it in the back of my throat. I like this tea ok but it is something I have to be in the mood for.

I’m lacking the energy for a detailed post tonight.

Short version: This tea is smooth, clean, and the flavor is fine. It isn’t bitter or harsh at all. It’s good, certainly priced nicely. It would be a great Wuyi oolong for beginners who are new to Wuyi teas and would like a cheap one to test brewing methods with. It also doesn’t really taste or smell like cinnamon to me. The scent reminds me more of char and cigar tobacco, while the flavor is not far from a cigar either, and neither taste nor smell come off terribly complex to me.

Of Wuyi oolongs I have had, this one gives one of the least pronounced impressions. It’s a typical representation of Wuyi oolongs, great perhaps to someone new to the world of fine loose teas, especially because it is affordable, but to compare this to the finer Wuyi teas I’ve had would be unfair from both ends.

But then, when you sit and analyze a tea, and compare it to others, instead of just enjoying what you have in front of you, well, some would argue that’s missing the purpose of tea, and I’d tend to agree with them.

Though reviewing has its merits, especially for the forgetful, who are otherwise blessed to get the best of their blunders.

I just had the most epic fall, seriously, if it didn’t hurt so bad I would say it was a thing of beauty. Yours truly was standing on the bed snuggling Espeon who was on the top bunk (bunk beds are awesome for storage) sleeping in her bed. When I went to get down my foot somehow managed to get tangled in the sheet and instead of stepping off the bed I crashed to the hardwood floor. My hip and wrist took most of the fall, making it hard to sit and type, my clumsiness really is a thing of legend. But at least I have my pre-New Years cleaning done!

And since it is the day before possibly my favorite holiday (it really is a tie between New Year and the Mid Autumn Festival) I am going to review one of What-Cha’s Chinese Oolongs, specifcally Fujian Cinnamon ‘Rou Gui’ Wuyi Rock Oolong Tea, yes it is Yancha time! I am noticing a trend, each time there is an important event I seem to review a Yancha, so this is officially going to be a thing now. So, first off, a little backstory, this specific Wuyi oolong first showed up in the Qing dynasty (which could be somewhat recent or a really long time ago) and is the most recent tea to be added to Wuyi’s famous bushes, this one bringing it up to five. The name Rou Gui is a reference to its cinnamon notes that are supposedly present in the aroma and taste. So, history aside, let us get to the sniffing! The aroma is, well, heavy, it is very heavy, like sinking into a hot bath when you are super sore and tired, you just kind of fall into it. There are notes of sweet cocoa, honey, cooked plums, and distant sweet spice. There is also a fairly gentle aroma of char and smoke, but it is more like a distant campfire than a raging coal furnace. This tea smells like warmth and smelling it makes me feel immensely relaxed.

When I brew Yancha I load my teapot with leaves, I mean I really fill it up, and usually use just under boiling water and super short steeps, think a few seconds. Not the brewing method for everyone, but this is my technique, in case anyone were curious how I brew my beloved Yanchas. So the leaves, once thoroughly soggy smell quite mouth watering. The heaviness from the dry leaf is still present, it is joined with a stronger char note, the cocoa is also stronger, and now there is a bit of loam and Spicebush. The liquid is spicy and sweet, like chocolate and molasses with a touch of cinnamon and nutmeg. The finish is a bit of char and honey.

Ok, first steeping time! I got bouncy waiting for my cup to cool to a suitable drinking temperature, nothing worse than a burned tongue…ok, burning your tongue and then spilling it all over your lap is also pretty awful. So, as expected, this tea is rich and heavy, it starts with lite molasses and toasted oats then builds to dates and spicebush at the middle. The finish is a bit of cocoa and loam with a surprising cooling sensation at the back of the throat.

The aroma of the second steep is heady, heavy, and sweet, it blends the molasses and char notes with succulently sweet spicebush and honey notes. I am such a fan of spicebush notes in tea, it is probably one of my favorite flower scents. So this time around the taste is not as sweet, the char notes are more predominant, and it has some nutty notes as well. Think a blend of fire roasted walnuts, tobacco, cinnamon, and a touch of molasses at the finish and you have this tea, also fun is that it warms this steep instead of cools.

Time for round three! The aroma this time is cocoa, heavy, and rich. It makes me feel sleepy and relaxed. The taste is milder and softer, starting with cocoa and char, moving into tobacco, plums, and nutmeg, and finishing with a distant taste of smoke and walnuts. I shan’t bore you all with further tasting notes, but I did get several more steepings out of this tea, and according to my notes, promptly took a tea drunk fueled nap afterwards!

For blog and photos: http://ramblingbutterflythoughts.blogspot.com/2015/02/what-cha-fujian-cinnamon-rou-gui-wuyi.html

Geez, I’m sorry you took a tumble. Hope your bruises heal up quickly! I really enjoy this tea, and I loved your poetic description.

Thanks you two! I am feeling better today, sore though surprisingly less so than I expected, so that is awesome!

had this tea on my afternoon break. Still enjoy it. Light, slightly sweet, and comforting. It’s a bit cold out there today, 1F. At least it’s above zero.

Miss Dixie seems to be improving. It’s still a tussle to get that liquid antibiotic into her. Poor little kitty. She’s not stupid. She sees me coming with the towel to wrap her paws up in and she takes off. I’m finding it difficult to hide the towel. This morning I spread it out over the rocking chair, then picked her up and carried her backward to the chair. Success! Got most of the meds into her I think. Three more days.