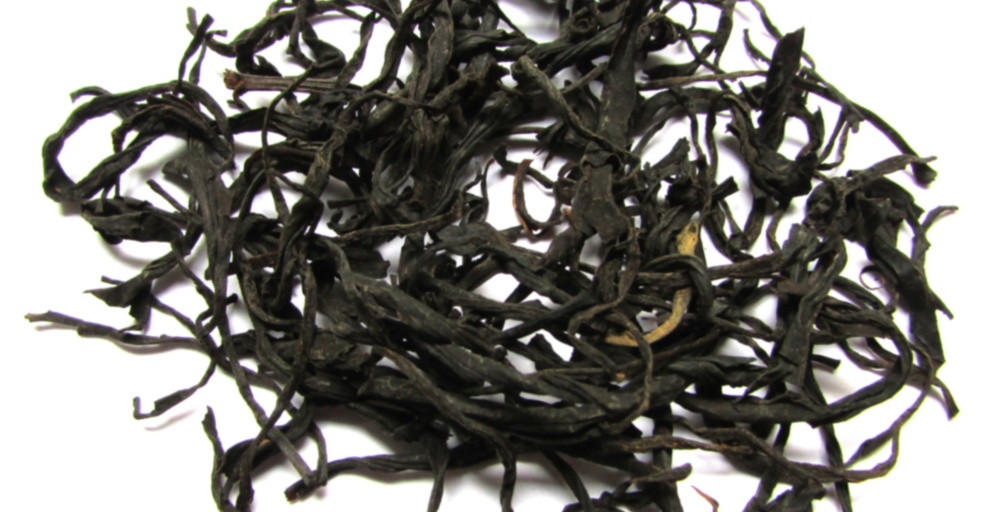 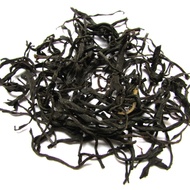 All Russian teas (except Adyghe tea) are grown within Krasnodar, located in south Russia on the black sea, to the east of Crimea. No chemicals are used in the production of Russian teas, which is possible due to the lack of insects which target tea plants. Also, tea leaves are left to mature longer on the plant than is traditionally done in tea production, which further contributes to the unique taste of Russian tea.

The dry leaf looks long, dark brown, and twiggy, and smells richly of citrus and raisins.

I took about 2 grams (enough for larger mug) and steeped it for 4 minutes at 90°C, as per the instructions on the package.

The resulting tea was a cool umber colour and smelled malty, robust, citrusy, and raisiny. It reminded me of a Ceylon tea, but it wasn’t quite as sharp. The first sip was a surprise, though: it was somewhat thin-tasting, but also floral — it made me think of lychees.

I brewed the remaining leaf in the packet a few weeks later and it was similarly thin, fruity and floral; it reminded me then of cherries.

Very nice black tea, without the sometimes too overwhelming astringency and taste profile of a black tea. Smooth drink with the right amount of flavor!

I usually shy away from unflavored black teas. This one isn’t your typical black tea. It’s calmer, if you will. There is some astringency but it’s not unpleasant. I also had sweetener ready to go but didn’t have to add it! I think I now know what “malty” is thanks to this tea. It is also quite smooth. Thanks for exposing me to this LiquidProust

I got a sample of this with an order. Didn’t have the strength of more southern climate teas, nor the longevity but fine for a couple of steeps.

Received this one from a swap with Christina!

The dry tea is nice long, spiraled leaves which look quite nice.

This one is good. It is not too strong but still has some boldness to it. Very slightly sweet. There are definitely burnt flavours, without any smokiness, and I like that. There is a bit of malt to the tea. I don’t get any astringency with this one. The second steep brews up quite a bit lighter, but the burnt flavour profile is stronger.

This should probably be called something like ‘delicate Russian black beauty’

First, this tea has a 194f recommendation which made me think it would be less vibrant than other blacks that get the killer 205f. Seems I was right because this tea is just delicate overall once brewed. During the What Cha tea tasting event I hosted, this was at the top for sure. The smooth taste mixed with a light color and an aroma that needed focus to understand it… just a wonderful tea.
Where many black teas have that ‘waking me up’ taste from the boldness, this tea has a calming sweetness to it.

This is a black tea that non black tea drinkers might find very enjoyable :)

I brewed this one for about two minutes at first with boiling water. Malty, smooth, sweet, with a little bit of tannin. Steep two for about 2 min and 30 sec and water at 190 degrees. Still malty, smooth, and sweet, but more cocoa and sweetness coming through with sweetness. Steep three at three minutes, and a stronger surge of malt, cocoa, sweetness, and a sneaking fruitiness.
I stopped, put the leaves in the fridge over night, and steeped it again at three minutes and fifteen seconds. Stronger fruitiness-almost citrus like hinting the dominant malt and cocoa, almost dashed by caramel. Steep four at about four minutes, and even sweeter with the same notes, but a more recognizable fruit. Cherry? Steep five at four minutes and 10 seconds. Something like chocolate covered cherries or raisins. I’ll stop here. Stored in the fridge again. The adventure to be continued another day.

I gotta say, I liked this black tea way more than the handmade one, though I need to sample that one again. This one was considerably smoother and sweeter. The first steep was okay, but as you can infer, I enjoyed it more and more as I steeped it. Maybe the fact that an ambrosia apple and an orange were close to the leaves in storage had an effect, but this tea has been one of my favorite samples so far from What-Cha.

My second tea from the What-Cha group buy.

I was expecting a Russian caravan tea, but instead got a geography lesson. Who knew that Russia actually produces tea? Not-bad tea either. The What-Cha website has more details about the history of Russian tea (they also offer teas from Georgia and Azerbaijan, which used to be SSRs, but are now independent).

The tea is OK but not something I’d go out of my way to get more of. It tastes to me like a cross between black tea and green tea. I’m probably the wrong guy to review this since I’m not a big fan of green teas. There isn’t much tannin, and the taste notes for me are a weedy flavor with hints of veggies (thus the reference to green teas). Nothing wrong with the tea, just flavors I’m not wild about.