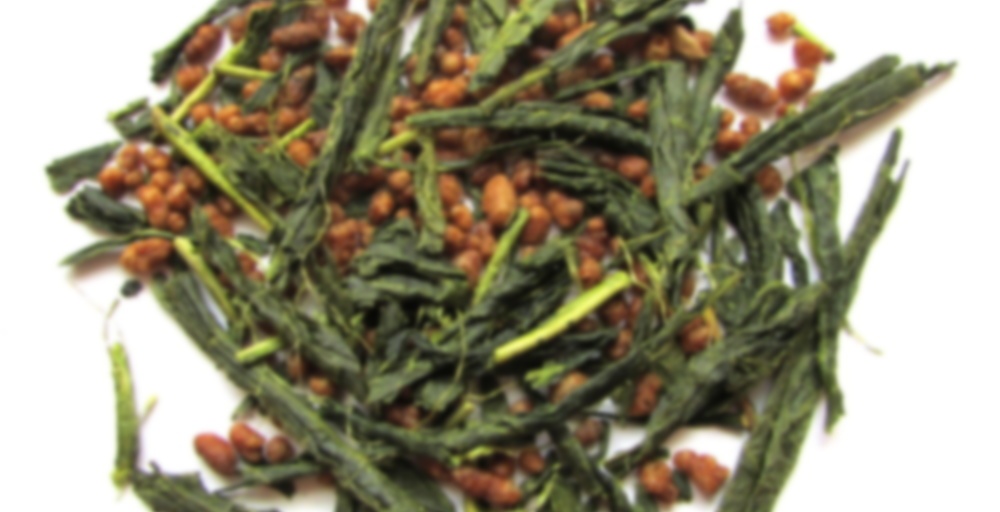 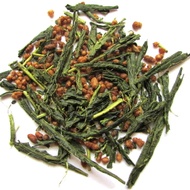 Big-leaved sencha and cute little uniform nuggets of toasted rice that havenn’t popped. The aroma smells strongly of toasted rice, so much that it reminds me of sobacha or peanut butter or sesame oil. This is a lighter-tasting sencha than what I’m used to compared to that had with sushi. The taste is a good balance of toasted rice and straw-grass seed-seaweed and salty tang. It’s a little drying but not too bad. The aftertaste is subtle but tastes like buttery caramel kettlecorn with a thin nectar sweetness. Second steep is thicker, sweeter and in general leans much more kettlecorn. Solid overall, but I think I prefer a bolder green tea presence.

Edit: Cameron B. says below it’s bancha, not sencha :)

Their genmaicha is made with a bancha base, and yes it’s definitely mellow.

I could google but I’d rather pick your brain- what’s bancha?

It’s just a lower grade Japanese green tea than sencha, picked from bigger and more mature leaves, later in the season. It tends to have a more mellow flavor and be a bit more grassy versus vegetal.

I wonder how much different is this to the tea bags I have sent?

The green tea taste isn’t as pronounced and it’s overall rather sweet.

Thanks; certainly this one sounds better :)

I was really excited about trying this…as I am about most teas. I love trying new things! But even though I’m happy to have tried this…I didn’t like it. At all! It’s just to too ricey and just does not have a pleasant taste to me. Every time I tried it I couldn’t help but think it would be amazing to drink with Sesame chicken. I guess that’s what the flavor reminds me of. Coincidently after drinking it most of this week I’ll be making Sesame Chicken for dinner. Go figure! Anyway…not for me and I don’t think I’ll ever be buying it again.

You get a couple of resters…but it doesn’t rested quite as much as other teas I have tried. Quality of the green tea doesn’t really matter since you are just mixing it with the rice stuff…that being said I don’t think it was high quality and I’m not mad at that. Why waste the good stuff to mix with rice…

Opening the bag the tea smells similar to a roasted green tea. The brewed tea smells like popcorn. The tea has a heavy taste of toasted rice. Given what is in this that’s unsurprising. However it has an underlying sweet taste thanks to the green tea. The combination turns it into something like Cracker Jacks. Later steeps do a reversal and the sweetness takes over after the leaves wake up.

Prior to finishing a sample pouch of this tea, it had been nearly a year since I had consumed any genmaicha. It’s a type of tea I love, yet for whatever reason, I just don’t drink it all that often. This was actually thrown in with a What-Cha order earlier in the year as a free sample. That was rather fortuitous considering I had been toying around with the idea of ordering some Obubu teas at the time, and the arrival of this sample allowed me to try one for free. Honestly, I found this to be an okay genmaicha. It was pleasant and it was not really bad in any way, yet it also did not wow me. I was expecting more too because I have seen this tea get rave reviews in other places.

Since I do not own a kyusu, I had to use a standard teacup and mesh infuser. I used about 3-4 grams of loose genmaicha for my approximately 8 ounce cup. I should also note that I tried a number of brewing methods with this tea. The one that worked best for me was a series of three infusions in which I started with an extended brewing time, cut the time back on the second infusion, and then extended it again on the third and final infusion. Steep times went 1 minute 30 seconds to start, then 30 seconds for the middle infusion, and then 3 minutes to finish. I also used a higher water temperature than What-Cha recommended. I researched this tea a little before trying it and found that other sellers and several genmaicha brewing guides suggested starting with a water temperature around 195 F and then increasing up to 212 F from there. I thus used 195 F water for the first infusion, 205 F for the second, and 212 F for the final infusion. I also tried brewing this tea both at What-Cha’s recommended 176 F and at 190 F, but I found that I preferred the results of the other preparation. Also, I did not cover my cup as the tea was steeping. I watched a video from Obubu on Youtube in which they not only did not cover the tea as it steeped, but they also recommended that the tea be allowed to steep uncovered. They were of course preparing this tea in the traditional manner and were starting with a significantly shorter initial infusion, but they insisted this method allowed one to better gauge the progress of the tea as it steeped. It probably was not necessary for me to do this, but I did it anyway. Did I get this one right? I probably did not, but hey, at least you know what kind of brewing methods I was using.

Prior to infusion, I noted that the dry blend produced mildly toasty, grassy aromas. After infusion, I noticed a strong scent of toasted rice balanced by hints of grass, spinach, and seaweed. In the mouth I found a nice toasted rice note up front, though I quickly found underlying impressions of hay, grass, seaweed, and something of a sweetness. It reminded me a little of caramel, though I also thought there was something rather floral and nectar-like about it. The second infusion again emphasized toasted rice on the nose. In the mouth, I found more balanced flavors of toasted rice, hay, grass, seaweed, and spinach. The sweetness was still there and I began to note impressions of minerals and wood too. The final infusion offered a milder toasted rice presence on the nose offset by a more prominent vegetal character. A subtle minerality was present as well. I found a somewhat heavier mineral presence in the mouth. There were fleeting toasted rice, grass, hay, spinach, wood, and seaweed impressions beneath it. I could also pick up on a faint hint of sweetness.

This was a very mild, mellow, subtle genmaicha no matter how I prepared it. I should note too that I was expecting a more balanced blend and did not quite get that. What I mean is that I was expecting a very even split between the toasted rice and the Yanagi bancha, but the toasted rice seemed to be consistently more prominent on the nose and in the mouth. Personally, I like my genmaichas a little heavier, a little more balanced, and a little more astringent, but this was not bad. It most certainly was not my thing, but again, it wasn’t bad.

This tea is much better served hot than cold brewed. I don’t find any new characters jumping out at me, just dimmer versions of the tastes I find in the hot version.

To be fair, I’d already gongfu brewed this tea quite a few times before an attempted cold brew. I’ll give it another shot starting with raw leaves, but I can say for now with certainty that this tea is not one you can stretch simply by icing after a gongfu session.