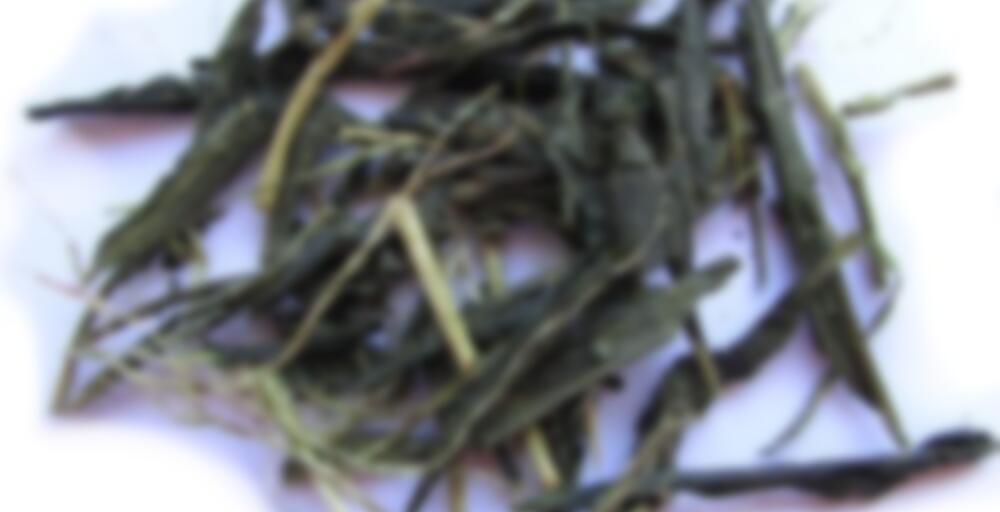 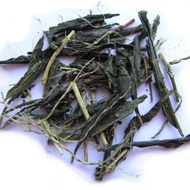 A most unusual sencha produced in early Autumn, it a lot smoother and lighter bodied compared to a regular Sencha with a sweet grass taste.

The sencha leaves are very uneven in size and include a lot of irregular size stem pieces too.

Sencha of the Autumn Moon

Well, how’s it going everyone? Me, I am so far behind. I had planned on getting through two full review notebooks before the end of the year, and that is not happening. I’ve been extremely busy this month and have not been able to motivate myself to spend much time on Steepster when I’ve had free time. I was hoping to pop back on here and get at least two or three reviews posted today, but it is looking like I’ll be fortunate to get this one wrapped up before I have to get back to work.

This was one of my more recent sipdowns, coming from around late October or early November. This was likely the last Japanese green tea of the year for me. I think it was the only one I had left in my collection at the time I finished my pouch of it. It was also a tea that I found to be a bit difficult to rate. It was not bad, but it did not offer the most consistent drinking experience from cup to cup or session to session.

Prior to the first infusion, the dry tea leaves emitted aromas of baked bread, grass, peas, butter, and seaweed. After infusion, I detected new aromas of minerals, zucchini, summer squash, and asparagus. In the mouth, the tea liquor presented notes of cream, asparagus, butter, baked bread, balsam, grass, zucchini, peas, and summer squash that were balanced by subtler impressions of marshmallow, seaweed, hay, lemon, and honey. The second infusion brought out a clearer and stronger asparagus aroma alongside scents of cream and parsley. A slight earthiness emerged in the mouth with a somewhat stronger seaweed presence, a clear parsley note, and hints of minerals, green wood, straw, lettuce, chestnut, sugarcane, and green apple. The third infusion saw the tea’s bouquet bizarrely die away, while stronger mineral, lettuce, and green apple notes made themselves known in the mouth. The fourth infusion did not offer up much at all in terms of aroma, though surprisingly strong butter, grass, sugarcane, and honey notes emerged in the mouth with hints of vanilla and carrot in tow. The final infusion again did not offer much on the nose. The tea liquor lightened and softened, becoming very creamy and subtly vegetal with pronounced butter notes, a faint sweetness, and a heavier mineral presence.

Ehh, this was not a terrible sencha, but it was also somewhat disappointing for me. I loved what the first two infusions brought to the table, but the final three left a lot to be desired. Compared to some of the other Obubu senchas I have tried, this was a more rustic and less refined offering, and it sadly lacked the staying power of some of their finest teas. Still, it was far from terrible and was worth trying for what the first couple of infusions had to offer. For now, I’m going to classify this tea as something I’m glad I tried but probably will not be in any rush to have again.

Don’t think I’ve ever had an Autumn Obubu Sencha. Interesting, but sounds like I’d want a small amount only :P