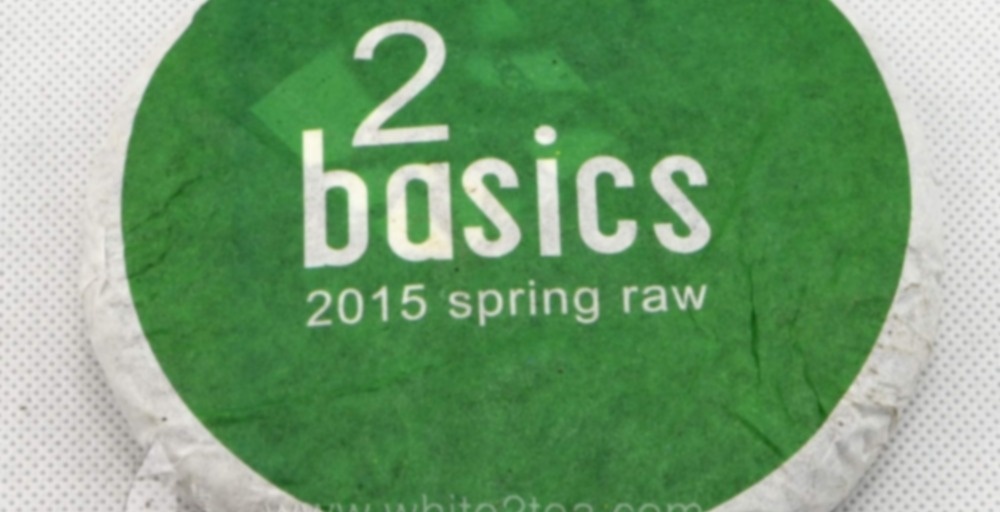 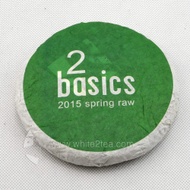 Representing a typical spring tea from Menghai area, this tea will be stronger and more aggressive than the other teas [in the tasting set] with more apparent bitterness and astringency.

This is part of the Basics Puer Tea Set:

The spring, autumn, and huangpian [the larger, older leaves] teas are all from the same village/producer, allowing for a side-by-side comparison of different seasons and grade of leaf. The aged raw Puer is from a different village, but similar area, allowing for new Puer drinkers to experience what the aging process can do to raw Puer tea.

Spicy and slightly sweet but very astringent.
Images and more at https://puerh.blog/teanotes/2015-basic-spring-w2t

Middle Steeps: Bitterness kicks in, mild huigan sets in the tongue, flavor reminds me of 2nd/3rd steeping of a mao feng. Astringent.

Tail End: Wet leaves have a TCM herbal shop smell to them now, vegetal flavor is fading, being taken over by a faintly grassy bitterness that lingers on the tongue.

Verdict: a decent young sheng to introduce to new people. Simple flavors, minimal steeping evolution. A decent baseline, but not much more.

I’m getting down to the last few sessions worth of this, revisiting it after not having tasted it in some months.

Maybe at the same time I got these I also bought a sample of the Milk, Cream & Alcohol: at the time, I was thinking that MC&A was about similar to this. When I mentioned that to 2Dog he was emphatic that MC&A was better tea, which thought I filed away for a while.

Later I bought a cake of MC&A and have been drinking it almost every day: it’s what I started with today, and I thought it would be good to do a near back-to-back comparison. Which is not totally fair to this tea, because it’s down to the last bits and is mostly chop at this point, while the MC&A I’ve been drinking has been looser, closer to whole-leaf material. But the session was instructive nonetheless.

This tea is definitely thinner than MC&A, especially considering that I was brewing chop (Basics) v. mostly large leaf pieces (MC&A). Spring Basics also has a considerably stronger bitter bite and comparatively powerful mouth-drying effect after 4-6 steeps. Basics has killer sweet dry-cup scent (in early steeps anyway) compared to the relatively bland one of MC&A, and Basics gives a nice fruity aftertaste, while the MC&A seems more about thickness in the mouth and an overall feeling of more power.

Anyway that’s my $0.02. I think maybe I will also do a comparison of Basics Huangpian against Fade. Basics Aged against Repave might be instructive also.

If you ever end up doing these comparisons, I’d like to read about it.

Had this with 4g and boiling water in my 60mL gaiwan. I was worried it’d be pretty bitter, but I hardly found it to be so at all, probably in part due to the fact I kept steep time low for the first 4-5.

Early steeps had a powerful, woody, kind of nutty taste with a bit of a bitter finish. As the session went on, the bitter finish turned into a mostly sweet taste, but the tea did have a decent mouth-drying effect. Flavors remained mostly the same throughout the session, so not particularly interesting, but was not at all unpleasant.

Yeah, agreed on the astringency. I’m finding that to be a characteristic I really enjoy in my young sheng.

When it’s balanced, astringency/bitterness really adds to a tea for sure :)

Very much of what Lindsay said a couple of months ago.

Today it was time for me to try one of the teas of the four cake set of raw pu’er White2Tea Basics. This is the 2015 Spring with a mushroom aroma and beautiful sap green coloured leaves and burnt sienna twigs. The tea is of light to medium thickness of a yellow ochre colour with the liquor slightly astringent and bitter apricot flavour due to its young age. Back to humidor storage it goes to mature further.

we call the humidor the “pumidor”. :D

That makes sense, pumidor = humidor for pu(er). I must get used to it.

What do you think of the basics set? I wasn’t quite sure it was worth it, but i’ve gone for the new Terrior W2T set… on a slow boat from China presently.

I just received the terroir set. After the tasting of the first cake of th Basic Set I put them back to the humidor.

I need to construct me one of those! Let me know your thoughts on the terrior set :-)

It is going to rest for at least two weeks as it came in a bamboo wrapped tong. Beautiful stuff!

Hello, Steepster! I’ve been away for a while. Still drinking some tea, just not as much as before, and not bothering to log it. Anyway, I’ve been getting email notifications about the Sheng Olympics and will hopefully have some lovely sheng in my mailbox soon, so I thought I’d better reaquaint my palate with this kind of tea. Figured I’d start with this one as a bit of a baseline. I steeped 7g in a 4oz gaiwan, with boiling water and quick steeps, foolishly forgetting that cooler water would probably be better. Anyway, it’s quite bitter – not necessarily in a bad way, it didn’t make me stop drinking the tea, but it’s definitely at the upper end of what I consider tolerable in terms of bitterness. To balance that out, there is a lovely throat-coating sweetness that sort of randomly appears while drinking (especially if I clear my throat between sips). I got some apricot in some of the earlier steeps, especially in the aftertaste, but mostly it’s a kind of medicinal vegetal flavour. Quite bold and no-nonsense, so overall I think it worked out reasonably well as a sort of palate-cleanser. What should I try tomorrow? Maybe the autum or huangpian from this collection, or something diferent?