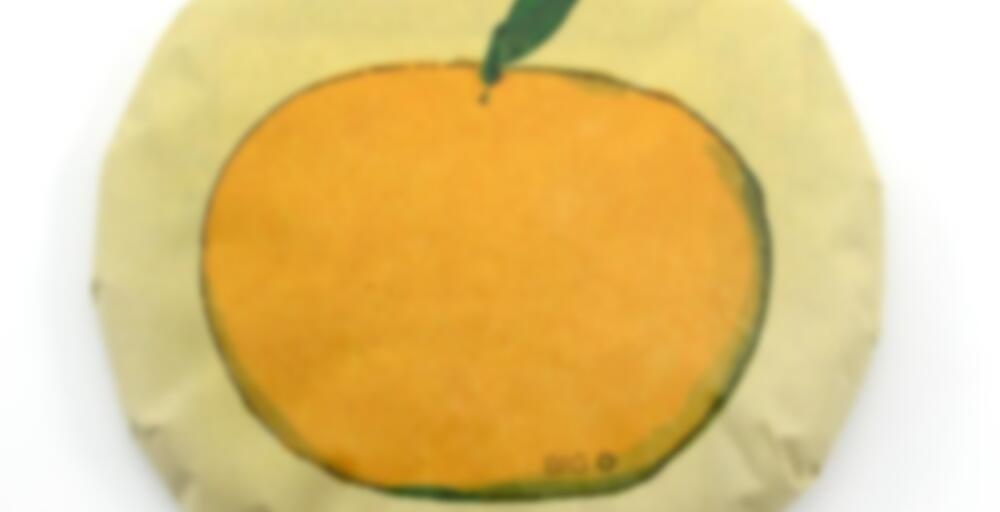 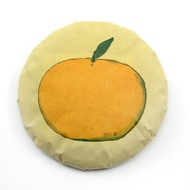 This blend of ripe Puer was pressed with aged orange peels, also called chenpi from Xinhui, in Guangdong province. The orange peels add an entrancing fragrance to the tea and will age with the tea over time. When steeping, the tea opens first with a smooth soup texture, with the orange peels contributing more during mid to late steeps. The dynamic between the tea and the chenpi is engaging and soothing. An excellent drink for cold weather, nothing warms you up quite like a Big O.

Each cake is 200 grams. Also available in roughly 8 gram coins. The blend contains both ripe Puer tea and aged chenpi.

I like the taste of ChenPi and Pu Erh together, it got a somewhat spicyness and herbal note
Always starts to comfort my stomach after excessiv emeals (christmas…)
Warms up the body too

I don’t know if I did something wrong but I got almost nothing out of this tea. The wet leaf had a nice light orange peel scent but I just couldn’t find it in the taste. Otherwise it was a pretty generic shou, clean tasting, nothing impressive. Color of the liquor wasn’t too dark, I’d say more of a caramel color. I intentionally left the last few infusions (8-10?) sit upwards of a minute and a half. The last one I totally forgot and it probably steeped for a good 10-15 minutes. Still nothing.

I definitely have to revisit this at some point. I’ll have to experiment with more leaf, boiling water instead of 95C and longer steeps right from the start. I’ll also have to get my hands on another chenpi pu-erh for cross reference. So far I’m just not impressed.

First ever chenpi shou, so I can’t evaluate relative to others, but this is good stuff. Leafing 1:15 was still a little light on the shou taste, I’d recommend slightly harder since the strength of the tea is cut by the chenpi. Not quite ready to beeng this yet, but when I have more storage space.

Got my first ever White2tea order and for some reason decided to start off by tasting the tea most likely to be a huge hit or miss. This is a tea I almost ordered a full cake of because I love orange flavor, but I am so glad I didn’t!

The smell of the dry leaves is fantastic. Musty shou smell with a gentle orange hit. However, the taste is not so good… Unlike in the aroma the orange is quite overwhelming in the flavor. I might not mind that if it was a good orange flavor, but to me it was really unpleasant. It’s a bit medicinal tasting and so distracting it’s hard to taste much of the tea underneath. From what I could taste it was a fairly run of the mill young shou, but it was really hard to pay attention to.

I brewed this gongfu style and had to leaf very heavily since there’s quite a bit of orange peel so you’ll get a rather weak brew with the 6g I’m normally put in my 120ml gaiwan. Unfortunately I didn’t get much evolution of the tea over time, if anything I’d say the orange flavor was a bit lighter on the first two steeps, but by the third it had completely taken over.

I’m not going to rate this tea since it’s clearly so far outside my tastes, but I’d warn for anyone who hasn’t had a chenpi tea: approach with caution, this may not be the orange flavor you’re expecting. I’m going to save the rest for summer and see how it turns out as a lightly sweetened ice tea.

The one session I had when I was sick – mostly because it’s one of the only “traditional” teas I’m willing to steep up when I feel off my game. Chenpi – good for what ails you, am I right!? Generally I don’t drink a lot of tea when I’m sick, which is probably the reverse of the average person. Exceptions to that rule are typically lemon teas, mint heavy tisanes, and shou blended with chenpi like this one. A little sweet, but mostly thick and slightly medicinal, with a soothing/cooling feeling on the throat.

What do you drink when you’re feeling off?