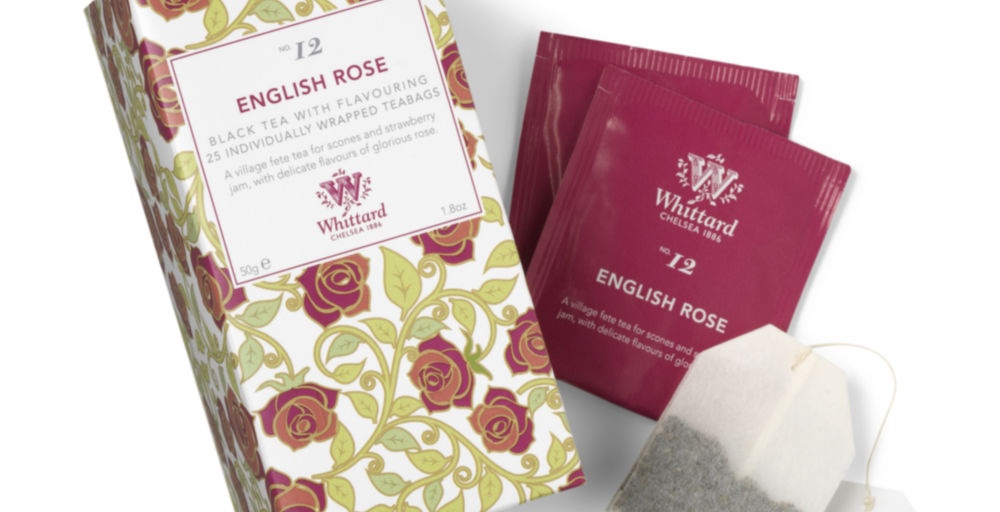 by Whittard of Chelsea
63
You

It was during Chinas Ming Dynasty that tea artisans first experimented with buds and blossoms, imbuing the leaves with essential oils. Weve recreated the taste of a classic Meigui Gongfu; rose tea by using a Chinese black tea for the base, imbued with subtle floral flavours. As part of the beautiful Tea Discoveries range weve given our individually wrapped English Rose teabags a whole new look, with a pattern inspired by vintage tea dresses. Its a rather stunning addition to any kitchen, and the perfect gift for a tea lover. Contains: 25 Individually wrapped teabags.

I think it is this one, based on ashmanra detailed view of tea bag she got. Mine looked like same, even with those white small spheres. Ingredients were saying only: Black tea, flavouring. Anyway, it was a tea bag from Izzy.

To be honest, I never was, and probably never will be a fan of rose teas. They are usually soapy for me, sometimes it’s somehow overpowered by the rose and now and then it smells like a dish soap or just somehow weird.

Brewed, and I think I did about four minute steep, was better. The base tea was quite mellow and I assume it could be Ceylon mostly, as it was bit citrusy. But the rose was there and I liked this brew. It was quite nicely floral and… that’s it. Quite decent brew, though it does not make me happy they don’t even try to put some real rose in. Flavouring isn’t something I would like to see in a tea I get for 5,50 GBP per 25 tea bags.

And if you want to know what is difference between red and gray tea bags, let me answer: NOTHING, as I have asked them directly on their website chat. Happy for me as a tea bag collector, worse for anyone expecting some difference.

Well, this is new. I reviewed this a day or two ago and wondered where to put it. Mine is a round sachet, not a teabag as pictured in the image here. Another reviewer said it tasted like artificial strawberry banana candy but mine isn’t tasting like that. So maybe it wasn’t the same thing? This came in a big set. But the pattern on the box is the same as the teabag one.

I still like it a lot, it is still very rose flavored but not too heavily so, with a somewhat brisk black tea base. Martin Bednar mentioned that the loose has rose petals in it, so I decided to tear open the sachet!

I found more confusion. This is really fine textured tea – as in bigger than dust but not by much. There are lots of tiny round white pellets in it as well. It looks like that potting soil with perlite or whatever in it, but in miniature. If you do dollhouses and want some realistic looking potting soil, here you go!

I assumed it was bits of sugar but surely they would have to label that? The ingredient list says only black tea and flavoring. I should have tasted one of those tiny spheres before steeping and may do so later.

I steeped it and looked for the spheres. Gone. So I tore open an extra sachet that was also in the pot and had been steeped. There were only two of the little spheres, super tiny, and I managed to separate one. I bit it, thinking it would be a crunchy sugar bit. It was soft.

Clearly there were more of these and they dissolved. This one tasted like nothing, not sugar and no explosion of rose to indicate it had somehow carried the flavoring. I bit one of the little pellets of tea (if we can call that tiny thing a pellet) and it was the same texture as the white sphere. So I still don’t know what it is. It must be the rose flavor delivery system. LOL

Weird as all that is, I stand by the fact that I like this tea. I think I will stick with buying Harney and Sons Rose Scented, though, which is a better quality base and is more accessible.

One person drinking it with me loved it, the other who mostly just likes plain black tea said she didn’t like its aftertaste, and I guess she meant the rose.

It was paired with homemade shortbread and made a decent companion for it.

That’s tea prepared like in some lab. Really close view on it! I have opened once the tea bag and yes – there were little pieces of tea (not just dust!) and if I remember right, white and orange pieces. White ones were sugar as I found out later, orange ones were actual fruit. But oh well, that tea was so sweet!

That’s how we know we have gone down the rabbit hole … when we tear open our teabags to get a closer look! ;) Sounds tasty.

Next goal – open a bag, separate several little white orbs, and taste. It may be like swigging rose cologne!

This is wildly different from the loose leaf version of this Tea Discoveries line. The loose version is true to the rose flavor, complete with aroma, but this…this tastes like drinking black tea steeped in fruity candy. Not sure what happened here. It reminds me of artificial banana candies, like banana Now and Laters. Or strawberry banana candy. Neither milk nor sweetener helped.

I wonder if something nearby, perhaps in the shop before it sold, tainted the flavor? Mine tastes like pure rose, lighter than Harney’s Rose Scented, and nothing else. The black base is mildly drying, but only a tad. Mine are sachets rather than bags.