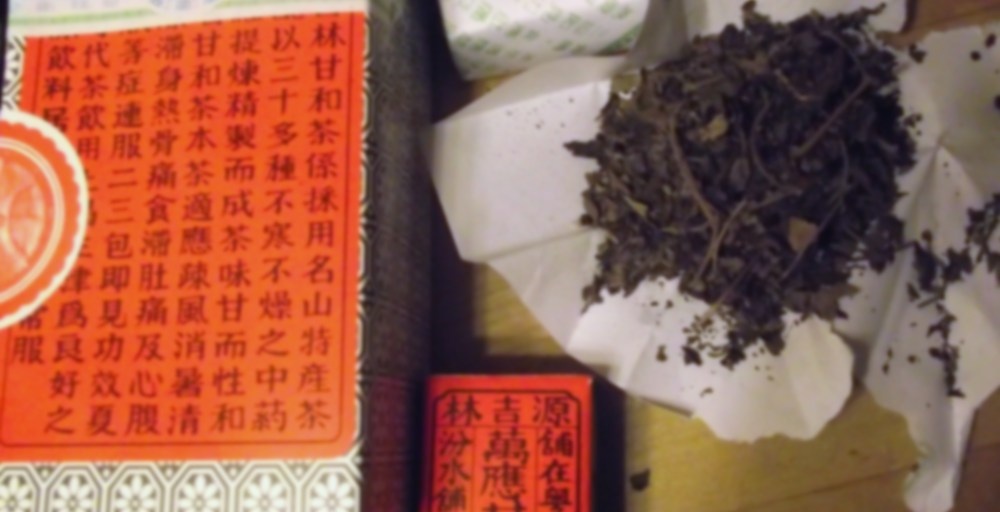 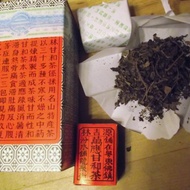 I have the house entirely to myself for the week, everyone is off in Madison celebrating the holidays and I am here at home. I decided to stay home because travel is not good for me and it has been a long time since I had some real ‘me’ freedom. So far I have spent my time playing Minecraft and drinking tea, so nothing too different than usual. Today’s tea review is going to be different (kinda) than the usual, today I am reviewing a Traditional Chinese Medicinal (to be abbreviated TCM from here on) tea, oh dear.

Kam Wo Char comes in one of the coolest looking packages I have ever seen, I admit that and the extremely cheap price at my local beloved Asian market were the reasons I tossed it in my basket. Hailing from Hong Kong, it is one of those ‘staples’ that a lot of houses have, it is like the TCM version of theraflu, although the box just says ‘to soothe dry throat membranes and as a mouth refresher.’ Also it says in very clear letters NO POISON, I found that hilarious because if you have ever had TCM teas you can safely say they taste like poison. There are a humongous amount of herbs in this tea, I have heard of quite a few of them, but there are some that I have never heard of and do not translate into Western herbalism.

The aroma is very much so that of an herb shop, there is a little bit of everything. The aromas that stand out the most are straw, sweet Annie, mint, and pickles. Yes, this tea smells vaguely of pickles…and I am completely ok with that. Compared to other TCM this tea smells like heaven, at least compared to the ones I drink regularly. The aroma clears the sinuses and is refreshing and a little nostalgic.

The instructions for this tea say to steep for fifteen minutes, that is pretty impressively long! The aroma of the steeping leaves is a balance of the different herbaceous aromas, no ones herb stands out and there is an underlying sweetness that was not there previously. The liquid sans the pile of leaves (that now resemble the remnants of leaves in a gutter after a storm) has a much richer aroma with notes of mint and earthiness. I also detect a hint of root herbs. I noticed there was a slight oily film on the surface of the tea, it was shimmery and pretty, but I am easily entertained.

And now it is time to taste. The liquid is so dark that it seems almost black, well no more stalling. If you can imagine me sipping the tea and then immediately convulse and start making strange noises, then you are entirely correct. The initial taste is incredibly bitter, the bitterness of medicinal herbs and roots. After the initial kick of bitterness the taste becomes very smooth and just herbal. The more I drink the more I start noticing other flavors; mint, dill, straw, it seems to evolves with each sip. I start noticing herbs that I cannot even begin to describe their taste because I have nothing to compare it to, the evolution of this tea makes it very fascinating. If you can get past the initial kick in the face bitterness it is a great medicinal tea, and it certainly helped my sniffles and sore throat, not to mention my headache! This tea is certainly going to be a cold season staple.

For photos and blog: http://ramblingbutterflythoughts.blogspot.com/2013/11/yuen-kut-lam-kam-wo-char-tea-review.html

Time alone is a good thing. I totally get it. If I didn’t have to do the inlaw thing and I could ship the husband off somewhere, I’d love to be on my own this week. :)

Medicinal use, good for colds. Taste is a bit smoky and slightly bitter. I love the packaging.