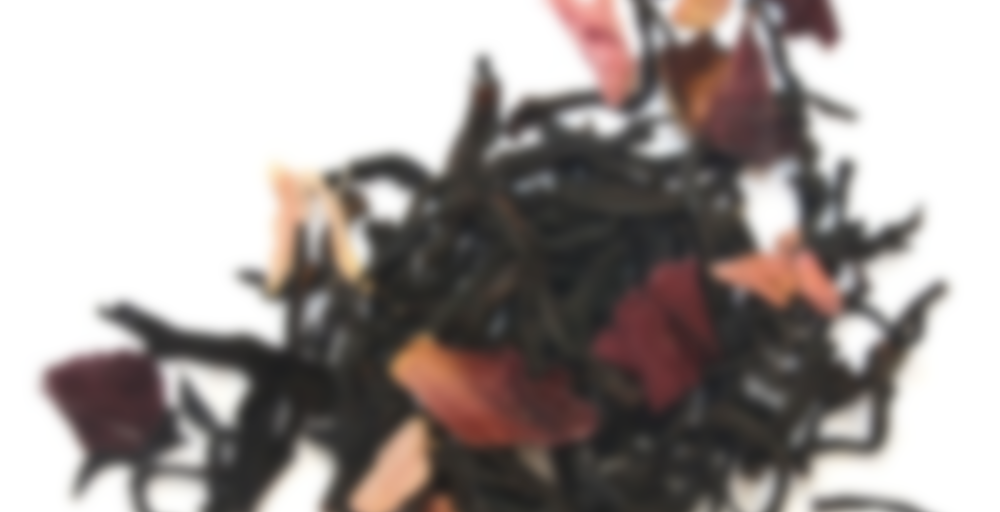 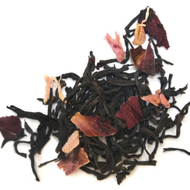 Tastes like: Happy memories
Drink when: “You’ve got to promise not to tell anyone what I’m about to tell you”
Creamy, Fruity and ever so playful in flavours, the Blueberry hill is best enjoyed in chattering company, don’t be surprised if OMG scatters through your conversation and stories are opened with “do you remember the time when…” It’s the mix of the berries, cream and scattering of pretty peony flowers that make this tea taste so friendly.
Ingredients: Blueberry, Rhubarb, Peony Flowers, Vanilla with a Keemun black tea base.

This one came from Cteresa and I have to say right out from the beginning that having read the ingredients list, I have very high expectations. Very. High. Expectations. Probably unreasonably high, to be honest, but I can’t help it.

Blueberries, I like those. Rhubarb, a really interesting and seriously underappreciated flavouring opportunity (I’ve only ever seen it in green before) and vanilla. We all know how I feel about vanilla.

Vanilla mixed with other fruit? I do that regularly at home already. It’s particularly good with cranberries (as per my Late Summer Blend from AC Perchs) or other berries. Not so much with citrus. That only works sometimes. (Lemon + blackcurrant, however, is also quite a hit, I think)

Of course, then it also contains peony flowers, and I’m not super pleased with flowery teas, but I have a hope that it will only be floral as a way to accentuate the other flavours.

The aroma is primarily sweet and somewhat floral. The sweetness is somewhat vanilla-y, but it also has a tang of rhubarb to it and a great deal of blueberry. The flowery aspect is clearly detectable but it doesn’t ‘break’ it for me. It’s not strong enough for that at all. Primarily it smells a bit like sweets. Untraditional sweets maybe, but still.

So far so good. All expectations are well and truly intact here. On aroma alone, this gets a fair few points.

Let’s start with the bad and get that over with. Unfortunately, the floral aspect is somewhat stronger on the flavour, although not quite to the point where it gets soap-y or perfume-y. It’s just exactly strong enough to not just be a background player, and I can’t totally ignore it.

That leaves the blueberry, vanilla and rhubarb. There is definitely LOTS of blueberry. It’s very strongly flavoured with berry, this, and I feel the vanilla and rhubarb takes more to the background. It is here we find that accantuation of the flavours, not in the peony. I should really have liked it to be the other way around. I would have liked to have those two flavours stand out a bit more. As it is they merely add a bit of sweetness and touch of tartness. (A rhubarb and vanilla blend alone I suspect might be kind of awesome)

Now the base. This is a Keemun base, and while I wouldn’t be able to tell without knowing this, now that I do, I can find some Keemun-y characteristics in it. Particularly the rye-y notes, but no pseudo-smoke. This makes me wonder if this base is one of those that I would find more floral than smoky, and if it is, I really wish they had left out the peony. A floral Keemun should be plenty floral all by itself. Unless of course it was this precise note they were trying to bring out over the flavouring, which I suppose is possible and makes sense.

Circumstances beyond my control forced me to leave the cup for a little while and when I came back, the tea had gone all lukewarm. I wouldn’t say this was really to its advantage, but it did make me think that this might be a good candidate to try in a cold brew if given another opportunity.

When first I was attempting to make a Yumchaa order, which, due to difficulties with their site, I had this one on the list. Right now I’m not sure if it will be included when I make a second attempt at ordering. I mean, yeah, I find it very enjoyable, but I’m just not entirely certain that I really need more of it now that I’ve tried it.

this is a sample tea I just received from cteresa – thanks so much for this.

I love keemun teas, I love their mellowness. I never had a tea before with blueberry I think and was very excited about trying one.
Blueberry Hill is a good tea to begin with a blueberry tea.
I really had a high dose of blueberry and this is what I was looking for. In addition, I received as well a very floral note but in a second role.
I think this tea would fit perfectly with an English blueberry muffin on a greedy afternoon.
Now there is something missing for me especially for a keemun : no real mellowness, creaminess yes but no mellowness.

I think i picked this because of the peonies, it is the one tea I had with peonies on it – but it is not too noticeable! And then I remembered than their Enchanted Forest tea is sort of a green take from this, also red fruits and peonies, so sent both (i think! I did send Enchanted forest right?). I am very fond of Yumchaa blends.

yes you sent me Echanted forest …such a promising name :)

This has its own vocal fanbase. I have been meaning to try it for almost two years, but it has been sold out or unavailable at the place I was (or to be fair, I think on one occasion I skipped it in favour of a few others, though I did not know it had such a following). And finally it is back on stock and available for mail order.

Alk that and somehow, amazingly it was not a disappointed. It is lovely, a blueberry-rhubarb-cream-peony petals mix where I think I can spot all the flavours (apart from peony, whose presence I am not actually denying. For all I know, it might be there, but I do not know what peony petals are supposed to smell or taste like. The only peonies I ever sniffed had not much scent) and all flavours meld perfectly. This is the more focused real tea, older brother version of Berry Berry Nice. (Berry Berry Nice is my favourite ever non-tea tea). I love it.

I so wanted to love this tea. When reading the description, I thought it would be perfect and get to be one of my favorites. Let’s just say that I had very very high expectations for this blend.
Unfortunately I’m a bit disappointed, as I feel that this tea does not deliver all expected (though maybe unrealistic) promises. It’s nice, but no out of the world experience when drinking it.
The tea base is very nice, neither too weak not too strong and with no bitterness, even when the tea is forgotten steeping. The flavors are very pleasant and very natural tasting but not as strong as I expected. I honestly do not manage to recognize any of them and I’ve had this tea more than 20 times already.
This tea does not allow much resteeping, as it soon provide only a weak brew.
I will probably not go out of my way to rebuy this, though I’ll enjoy drinking it and might consider buying again much later if there are no better options for fruity-peachy tea or as an add-on to a rooibos order.
IMO this tea is good but not as deliciously flavored as Yumchaa’s rooibos.

Gave this a whirl when my girlfriend and I popped into Yumchaa Soho for tea the other day – neither of us had tried it before. Yumchaa have a tendency to put little tea in the one-person teapots so that it doesn’t oversteep, which usually works rather well, but on this occasion I think I might have preferred it a little stronger! The blueberry and gentle vanilla tastes are definitely there, and for once I was surprised that the fruit flavour overcame the floral notes— a little stronger would have been perfect, but as it is, it made for a sweet, well-rounded cup.

Here’s another sample from cteresa (thank you!)
I like it. It’s very “flowery”, more so than I thought when I read the name, but even though I’m more of a fruit fan, this one is very nice.