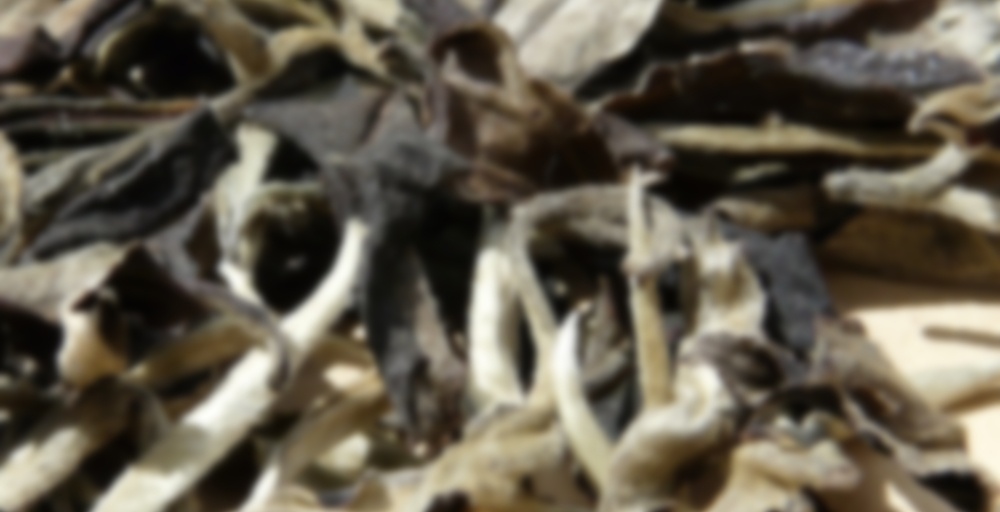 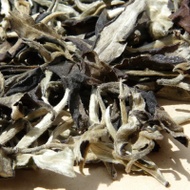 This is a special tea made from Yunnan Large Leaf varietal tea in Simao. The tea is picked in the early spring, wilted slightly and then dried with warm wind tunneled through the tea until it isdry. The tea shares a somewhat similar look and taste with green tea whenit is young but over time will develop into something closer to red tea (hongcha).

The taste is sweet and thick with malty tones and the tea can be brewed 7 or 8times before losing its flavor.

Received a nice little sample of this from a teafriend when I visited him. This YGB seemed to be a little bit more oxidized than some of the others I’ve tried. It was mostly malty and honey sweet, with a little bit of fruity sharpness on a few steeps – like raisins or dates. Soft mouthfeel. Towards the end of the session, it started to get a little bit woody – like a really dry woodiness. Yue Guang Bai is good, but I don’t think I like it enough to really buy large quantities of it or anything.

Gongfu style brewing this tea, the leaves in a warm gaiwan smell very sweet and milky. I’m reminded of horchata but I’m also reminded of sweetened condensed milk. It’s very sweet smelling and has little hints of chocolate, kind of reminding me of chocolate chip cookies fresh out of the oven. The wet leaves give off the very perfumed and distinct aroma of moonlight white tea, and also smell like cooked stonefruits.

The liquor of this tea is a pale moony yellow, and to be honest, I had to do a double take to make sure I wasn’t drinking just the teaware rinse water (with no tea) during my first infusion of this tea, the flavor is so light. Not at all what I expected considering the intense aroma.

The second infusion has a creamy, milky kind of taste to me, with hints of oats. It’s very light in flavor still, so I’m going to add some leaves to the next infusion. I’m surprised because I have the gaiwan half full of leaves already.

After adding leaves so that this gaiwan is entirely full of them, my third infusion still tastes incredibly light. It’s mostly a creamy almond-milk kind of flavor. The fragrance is filling the room from the leaves, but taste is mild.

I did a much longer infusion for the fourth, and I’m getting notes of honey and malt now, but I’m still surprised at how mild the flavor is. White teas are some of my favorites, and I do tend to brew very light. In fact, one of the folks from Tealet I had tea with once told me I was probably the lightest gongfu tea brewer she’d encountered, so you could say my palate is probably rather sensitive and adapted to drinking and enjoying delicate flavors, especially with white teas. I tend to brew them especially light. I love the gossamer-like nature of their dewy, fresh flavors. That said, I feel like I’m dumping tea leaves into my gaiwan right now, brewing the heck out of them, and still getting something more flavorless than what I’m used to.

I may have to try some other approaches to brewing this, but compared to other moonlight white teas I’ve had this one is surprisingly light, to the point I’d really more call it lacking in flavor than simply light.

I will update my review if experimentation leads to any discovery of a better way to brew it. It was brewed at 90C/194F for about 20 seconds on the first infusion and longer infusions each time. I even upped the temperature of the water to 95C to see if that’d coax more out but I didn’t notice a significant change. As for my numerical score, I feel completely neutral on this tea, so I’ve rated it as such. The flavor is nice from what I can detect, but I can barely detect it.

Mainly because this tea is nearly impossible to ruin. It is very durable and has solid longevity. Steep it 7 times plus.

Lewis & Clark Traveling Teabox – Tea #7
I really appreciate all of the teas I get to try from this teabox, especially the YS! The leaves here sure look like one of the more interesting teas I’ve seen! It’s green mixed with white. Even with two teaspoons, the flavor isn’t too extreme, but I can taste subtle hints that there is both white and green tea here. The flavors are hints of juicy fruit, sweet lemon, melon, cucumber, peony or some type of flower, nuttiness, creaminess. It doesn’t really taste vegetal/ grassy like a green tea though. I guess double the flavors since there are two types of tea here! Sadly, I think there are also hints of flavor from the ziplock bag the tea was in. It’s very smooth… not too many fuzzies. The second steep was even smoother and all of the flavor notes seemed to blend together somehow, which is distinctly the flavor of THIS tea.
Steep #1 // 2 tsps. // 35 min after boiling // 2 1/2 min steep
Steep #2 // 20 min after boiling // 3 min

More from Yunnan Sourcing! I was quite impressed with the other white tea I tried, so I figured I’d try this one as well. I love that they provided huge samples so everyone could try every tea, so nice! This tea is a mixture of fuzzy silver buds and medium to dark green leaves in rather large pieces. Dry scent actually kind of reminds me of a black full bud Yunnan tea! It’s honey sweet and has that slight stonefruit scent to it, but this tea smells a bit more grainy and haylike while the black smells malty. When I brew white teas, I generally use a lot of leaf (a tablespoon usually) and steep it for just 1-2 minutes. I find the flavor to be stronger that way, and since this sample is so huge I was happy that I got to do just that!

Mm, the brewed aroma has a very strong honey note along with some grain that’s almost pastrylike. I also smell a little bit of fruit, though I can’t place what kind. Taste-wise I get mostly honey and sweet hay, and then the grain pops out near the end of the sip and lingers for the aftertaste. There’s the teensiest bit of fruity flavor if I really think about it, something mild like a dried fig or golden raisin. Overall, this tea is very simple but tasty.

This is either my first or second unflavored white tea to try. I’ve always read that it has a very light, subtle taste and that’s very true. I think white tea’s just not my thing. But you can tell, however that the leaves themselves are very high quality. So cute and fuzzy! And most of them are whole leaves. How do they keep them from breaking?!

This tea is so cute. Little fuzzy bud and the first two leaves.

First steep, is very light and delicate, it sort of reminds me of nectar. But there’s just slightly the barest hint of something deeper. There’s also a nice, refreshing, cooling mouthfeel.

Second steep, the flavor deepens a little. Like I have a cup full of sweet gentle nectar, and someone drips a drop or two of molasses in there.

Third steep brings out a faint floral note, and an almost hay like note, while still tasting sort of nectary.

Forth steep is honey and grains. Sort of like oats drizzled with honey.

Fifth steep theres an almost fruitiness to this cup, while still honey like.

http://yunnansourcing.com/en/whitetea/2913-yunnan-yue-guang-bai-air-dried-white-tea-spring-2014.html
Another tea I’m glad I got a chance to try!

This is my favorite tea. It’s sweet and clear with hints of cinnamon.