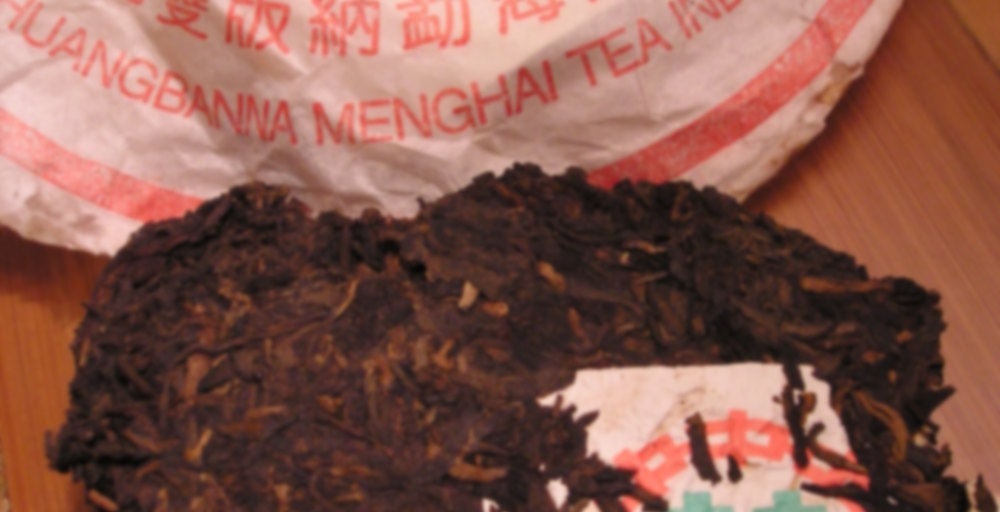 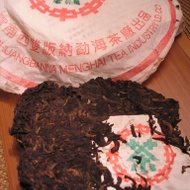 7572 is a classic recipe from Menghai tea factory, since it was first delveloped in 1975, the tea has earned the utmost respect of tea aficionados and collectors. The factory has used golden tips for the cake surface and fat leaves for the center, moderately fermented, with a reddish-gold color and an ever-smoothening taste. This tea is considered the standards for ripe Pu-erh.

PREPARATION: To prepare Pu-erh tea from cakes, carefully pry out the desired amount leaves and place in a teapot. Rinse by covering with boiling water and quickly pour off. Cover with boiling water again and let steep 5-30 seconds (depending on how light or dark you want the tea) and serve. Pu-erh tea can be steeped 10-20 times.

Hapily bumping the rating on this tea!

This time ’round I went for 9g in 190ml using the same seasoned shi piao style zi ni pot. Single rinse had 10 second total contact time (the general rate of pour for this pot) with water right off a boil. Only paid attention to four infusions before delving into just drinking alongside my dinner and winging temps and times after that. Tack 10 seconds onto these for total contact times: 25sec-99C, 30sec-98C, 35sec-96C, 40sec-94C, subsequent infusions a patchwork up to a couple minutes with 90C-100C water…

Fragrance is basic slightly earthen leaf litter and bark with a slight olive oil underlying note. Aroma heady wet humus and wet mossy rocks (not really earthy or musty, but there are parallels) and some dry bamboo. A good amount of bran comes out in the aroma on both the leaves and liquor. Liquor starts reddish and gets progressively darker brown until the untimed seventh infusion.

Much more crisp and coppery than last time brewing. Great body, lingering rice sweetness, and woody notes similar, but more of that sweetness and much more of a savory impression. Bamboo shoot or marsh grass vegetal notes peep through in the aftertaste. Crisp and refreshing despite thick mouthfeel and generally very warming bodily effect.

Later infusions I had with meatloaf and mashed potatoes. Very odd pairing, but by golly did they go well together! Heavy food and hearty tea with cool crisp air coming in from outside makes for a very nice experience.