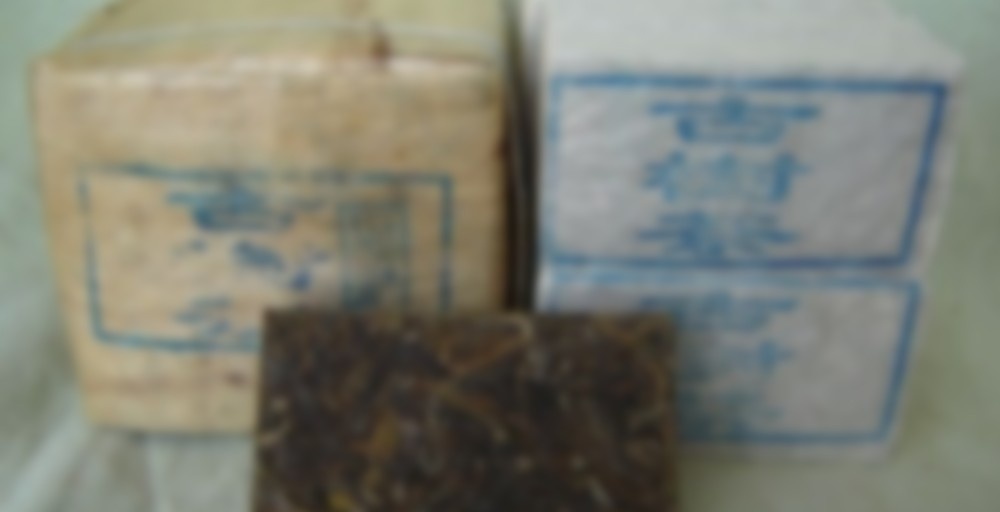 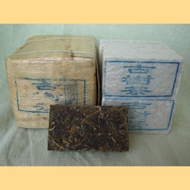 Mengku Tea Factory made an expedition to remote area near Banzhang mountain to obtain the leaves for these cakes. The leaves are from trees 400 to 500 years old that were heavily cut during the Cultural Revolution. The trunk is still intact and in the 35 years since the trees have continued to grow and produce excellent quality Pu-erh with that special Banzhang taste and penetrating perfume-like aroma. When brewed is golden yellow and takes 15 or more infusions, each infusion with it’s own taste and gradually less bitter and ineffably sweet.

The cakes are made from the highest grade Ban Zhang raw material and are entirely spring 2007 production. The price of premium Ban Zhang raw material has surpassed other tea mountains, because it is the most sought after. Many producers use just 10% to 20% Ban Zhang material to give their blended cakes enough “oomph” to make them taste good.A little more background.  I have known these sellers since 2005.  They were one of the earliest distributors of Shuangjiang Mengku tea in Kunming and were my suppliers for Mengku products in 2005 and 2006.  The Lao Ban Zhang teas were something that they did themselves as a side-project.  Since they did not identify their teas, I just started calling the teas “Mengku Lao Ban Zhang”.  They started sourcing teas from this area of Ban Zhang in 2003, again in 2005.  In 2007, they produced a Lao Ban Zhang tea of spring material and used the “Chun Jian” style wrapper of Shuangjiang Mengku but instead of"chun jian" written on the wrapper, it was written “Lao Ban Zhang”. This wrapper was produced in very limited quantities and was sold entirely to “Bank of China – Yunnan Branch” for gifting purposes.
2005 wrapper style is shown, 2007 wrapper is the same but with Ban Zhang (班章) characters added.

Product Name: Lao Ban Zhang Brick
Harvest time: Spring 2007
Net Weight: You will receive one 100 gram brick (due to inconsistent pressing, brick may be as much as 15 grams underweight, be warned!)
Ingredients: Sun-dried Pu-erh from centuries old trees at Lao Ban Zhang
Produced by Members of Mengku Shuangjiang Tea Factory

I got to have a session with this tea courtesy a friend of mine, for which I am very grateful. Especially since it is the first (plausibly legitimate) LBZ tea I’ve ever tried. My overall impression is kind of like I would expect in some sense. The tea has a relatively strong and protracted aftertaste, albeit maybe less sweet I thought it would be. The mouthfeel and qi are both very engaging and are clearly the selling points of the tea. Its taste profile is fine, but not overly interesting or complex.

My aunt, who drinks almost exclusively Japanese green teas, refers to pu-erh as “those teas that smell like old socks”. Honestly, I’ve never made such a connection, until today. Dry leaves here actually smell like old socks :D
Another scent that I rarely get in tea, which is often used by James and Denny from TeaDB, is that of gasoline. But it was the first association I got when smelling the leaves after the rinse. Otherwise, there were also hints of tobacco and hay.

The session itself seems to have two distinctive parts. The tea accelerates fast with a full body and hard-hitting qi right from the first infusion. The texture was creamy and very viscous. The qi gets spacey and stoning very fast with a spiritual undertones. Soon afterwards, the peak energy passes and what remains is a chest warming sensation and a clarifying energy that brings me to the present moment. However, by steep 6 or so, the tea had settled into a fairly stable presence with much less interesting texture or energy and it stayed like so for the rest of the session.

The taste starts off with a sweet grassy rinse that carries a protracted nutty, bitter, and acerb aftertaste. The bitterness is of a cooling vegetal kind in the next steep and there is a honey flavour in the finish. This translates to a strong huigan, which as I mentioned already, is actually not overwhelmingly sweet.

Second infusion is woody and a bit sour. There are flavours of peppercorn, fermented fruits, and kombucha. Astringency is mild here, but there is a nice numbing sensation after swallowing. Fourth steep then bring along the epected tobacco note as well as deep fruitiness.

Two subsequent infusions follow in a similar savoury vein. A distinctive leathery flavour appears and there is also a touch of smoke. Steeps 8 to 9 are actually somewhat bitter and display a sort of earthy taste of beets coupled with a musk note. In the aftertaste, I also noticed a lingering tingling sensation.

I’ll be on the lookout for the gasoline smell, that’s a new one for me.

Has anyone bought a brick of this tea and put humidity on it for a while? I’m half tempted to do this and would have at the old price of $70 but am leery of the gamble at $125 as the qi is stellar but the taste is so so.

I bought a 10 gram sample and stored in a humidified crock for a week, did 2 rinses and rested it about 20 mins. Early on I’m greeted with sour flavors telling of a tea that was stored too dry for too long. I also get flavors reminiscent of Skoal chewing snuff which to me is the signature flavor of fairly young dry stored 7542. After the 5th steep, the sourness is gone and the cheap tobacco flavors give way to notes of good cigar tobacco, raisins and figs. After 12 steeps I’m totally glued to the couch blasting Leonard Cohen tea drunk as anything I’ve had that’s under 30 yrs old. Judging from the qi and the thick stems I have little doubt of the claim that this is old tree from LBZ (or a surrounding village like BaKaNan). I also suspect that another 10 yrs of somewhat damper storage will transform this tea into a real monster. At $1.25g I’m almost willing to gamble.

Well… I took a gamble on a brick and steeped 4g straight outta the mail and it had none of the sour dry storage taste. Tasted similar to the other Mengku LBZ teas I’ve had but seemed to be a little more generous and better qi…

This was surprisingly decent. I have not a huge fan of zhongcha unless It has a fairly decent amount of age on it. Now, a 100g zhongcha is a little bit of question mark to me, but I decided to give it a go. The leaves are actually fairly loosely compressed and the give off a firm hay scent along with some wafting of light grape, tobacco, and grass, but it is mostly hay notes. I warmed my shibo up and threw it inside. The brick shavings gave off a strong raisin scent along with graham cracker, cedar, and more hay. I washed the leaves twice and prepared for brewing. The taste is fair with heavy wood as a base and sweet white grape skins on top. A nice lingering sweetness stays in the mouth, but this feeling passes very quickly. The kuwei is peppercorn, but it too is very quick. This brick has the typical tangy lbz quality in the background. The taste is slightly sweet with some very faint smoke and a light acidity. It’s hard to describe, but you know when you taste it. The sweetness and tannins continue to fade in and out with fruit punch flavors arising as well as some pepper. The tea is decent, but I wouldn’t call it great. The hugan keeps giving up too soon, and the flavors fade quickly. However, the energy is on point. The sensation begins right away with head spacing, ears ringing, some floatiness, and a great spatial vibe. I sipped on this as I conversed with a close friend, and this tea did well in fueling my ideas. I love conversation tea. A conversation tea is one that is enjoyable to sip at and the qi just jump starts your tongue. Your words move smoother and carry more depth; its a fantastic experience. I am debating on getting more, for the price is a little awkward for such a small amount, but the qi just might make this worth it.

While I enjoyed this tea a good amount, I couldn’t help but think how much better it could be. All the traces of a fantastic puer were there, but a little dull. Not sure if this brick is suffering from its awkward teenage years, storage issues (seems slightly too dry in my experience), or being stuck in a plastic bag in the TTB+ for too long. This honestly was a tea I enjoyed and would drink again, but I feel like a well managed brick of the exact same material would go from the good/forgettable category to fantastic. Please someone, for the love of god spend the money and drop $70 on a 100g brick to confirm this as I’m willing to bet a well stored brother of this sample would be excellent. As far as my 5g sample, there was some astringency but not the kind of ass kicking I would expect from LBZ material. It is nearing that 10+ year age within Scott’s dryer-ish storage so that likely explains this. The wet leaves had a fairly unique fragrance I couldn’t name.
Again I think this is a great tea from hints I got, but I only had a 5g sample that unfortunately may have suffered from prolonged zip lock bag disease. I’d be interested to hear others thoughts on the tea from more recent tastings.

The Trails of LBZ, Case 2 of 6
(Liquid Proust search for his favorite laser beam zensheng)

Came hoe pretty excited about going into my second LBZ; which can be confirmed as it is through YS. This one had the color of a roasted oolong would generally have and a smell that was actually picked up unlike the other LBZ that I could not smell. Very similar in taste, but a tad different in the feeling.

Brewed this one a few different ways and ended up getting most most out of it at 15 to 20 seconds. A mild mouth feel that goes away quickly, not really something I can say is nice because I like mine to stick with me. At about the eighth steep I knew I was in trouble though. My head felt like it wasn’t all the way on :/
This kind of gave me a headache. It’s quite strong and a little darker and deeper than the other
So far this is stronger one, but as for the taste I do prefer the lighter one even if it doesn’t make me look at my screen and wander into the light and realize it isn’t on.

Been thinking about picking up some of these.

Thank you to the good tea friend who was nice enough to provide this sample. I actually drank this earlier today but am just now getting around to reviewing it. It was tasty. It had a nice aged color and taste. It was smooth and not bitter. It seemed like I detected a hint of smoke there but am not sure. There was a slight sour note in the early steeps that eventually went away. I steeped this brick eight times so far. I may go back to it tomorrow.