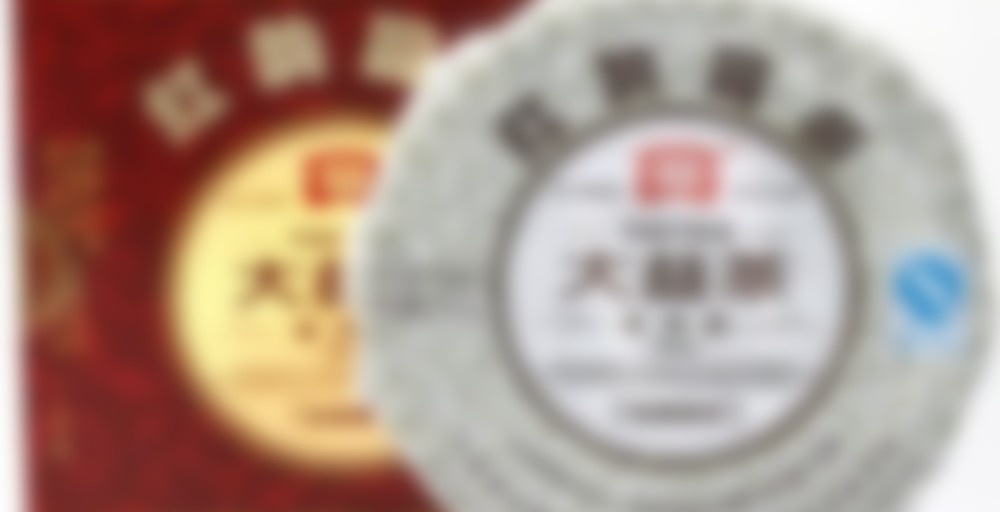 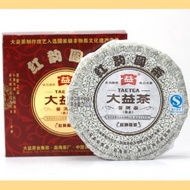 This is the one of the highest grade premium ripe teas released by Menghai tea factory for the year 2012! It is also the second release of this mini iron cake which is called “Red Rhyme” (Hong Yun 红韵）. Menghai tea factory is the foremost tea factory in Yunnan with more than 50 years of history. Their quality of their ripe pu-erhs have made them the undisputed King of Ripe Pu-erh! This collectable mini tea cake is composed of grade 3 and higher leaves, all smaller leaf fermented material with plenty of flavor to give up when brewed! When brewing keep infusion times very short in the beginning! Sure to be a classic due to its amazing textured flavor profile and limited production quantity.

Time for another Menghai. Why not. I’ve had this little fella for probably close to a year, but since it’s so tightly compressed I decided to give it plenty of time to chill and get settled. Generally I avoid anything that’s highly compressed, but since this was such a small bing and a relatively cheap investment, I decided to go for it. I would most certainly advice caution when breaking into this fella. My pick slipped several times while carefully trying to break off the leaves for this session, but luck was on my side and it never hit anything. I used 12 grams to 160ml and both brewed the tea in and drank it from Jianshui clay.

I gave the tea my customary 5s rinse and 5 min. rest. I did a total of eight steeps, for 8s, 8s, 10s, 13s, 18s, 30s, 60s and 2 min. The first steep was still fairly light due to the compression. There was some pleasant sweetness, but what stood out the most about the teas was how clean it tasted. There were some “browner” notes as well, not sure if I’d call them earthy. The body wasn’t thick, but still pretty good.

By this point the more compressed bits were already coming apart and the next infusion brewed much darker, although nowhere near black. The texture was thick. The taste was dominated mainly by a single dark note I couldn’t find a word for. The finish consisted of a bitterness reminiscent of cheap coffee. The bitterness grew as the tea cooled down. Compared to average ripes, this infusion was quite nice both in terms of texture and upfront flavor, but reviewing this back to back with Menghai’s own special production Xin Hai Bai Nian cake really highlights just how much simpler this tea is.

Steep number three produced about the same color, but this time the texture was much lighter. The taste was clearer, with dark notes still present and hints of coffee bitterness in the finish. The liquor, although never overly cloudy, was finally quite clear in the fourth steep. The texture was light to medium and the taste even clearer than before. After struggling to identify the dominant flavor, I’d say it’s dark wood.

The soup started to become creamy in the next infusion, although more in texture than the actual taste. Even though the extraction itself wasn’t weak, the flavors were already clearly beginning to thin out. The tea left the palate relatively clean with perhaps a slightly mineral finish. The tea became even creamier in the sixth steep, although also possessed a slightly unpleasant tinge to it. While the extraction was adequate, the flavors themselves were light. The tea was simple enough to drink.

Having pressed the tea a lot harder for the seventh steep, the extraction was indeed stronger, but this could do very little to counter the flavors that were thinning severely. The texture was less creamy, with a taste of slightly decomposed wood. Infusion eight was the last one I did. Despite losing a lot of its color, I still managed to pull out the woody notes, although the underlying minerality was trying to push through them. The sensation on the tongue was quite mineraly. The tea wasn’t weak, but thin in terms of the flavors. It was decent though. Drinkable. The leaves could have possibly provided an infusion or two more, but I didn’t see enough value in trying to stretch them out and so I decided to end the session there.

While paling in comparison to Menghai’s own Xin Hai Bai Nian, this tea was better than your average ripe and proved once again that Menghai produced solid shu pu’ers, even if they aren’t always particularly noteworthy. To me this came across as a solid daily drinker and something that would make a great introduction to shu pu’er. Probably the thing that struck me out the most about the tea was how surprisingly clean it tasted. I know it’s already been five years since it was pressed and it probably consists of slightly aged material, but still it came across as a lot cleaner than I expected, given the compression, storage and so forth.

What I was probably the most disappointed in was the longevity, especially given how this tea didn’t brew particularly strong at any point. I didn’t find the flavors anything amazing, but they are rather well-defined and keep things very simple and straightforward. This in conjunction with the cleanliness makes me think this would make a great introduction tea to ripe pu’er, although there are many alternatives out there.

For me personally this tea was not interesting or rewarding enough to be something I’d buy more of, but I’m not ruling out that it could develop more complexity slowly over the years. For the price it’s not a bad choice, especially if you want something clean and simple. I think you could probably go a little heavier on the leaf than I did and get good results.

A nice ripe. Really compressed so pick carefully. Had a bit of funk on the nose but goes away after a couple of steeps. A very smooth and slightly mellow brew. Nice mouthfeel that gets better with more leaf. Has a nice tobacco earthiness/sweetness. No smokiness or bitterness with this one. A bit lighter than a lot of ripes but pretty nice. I would recommend.