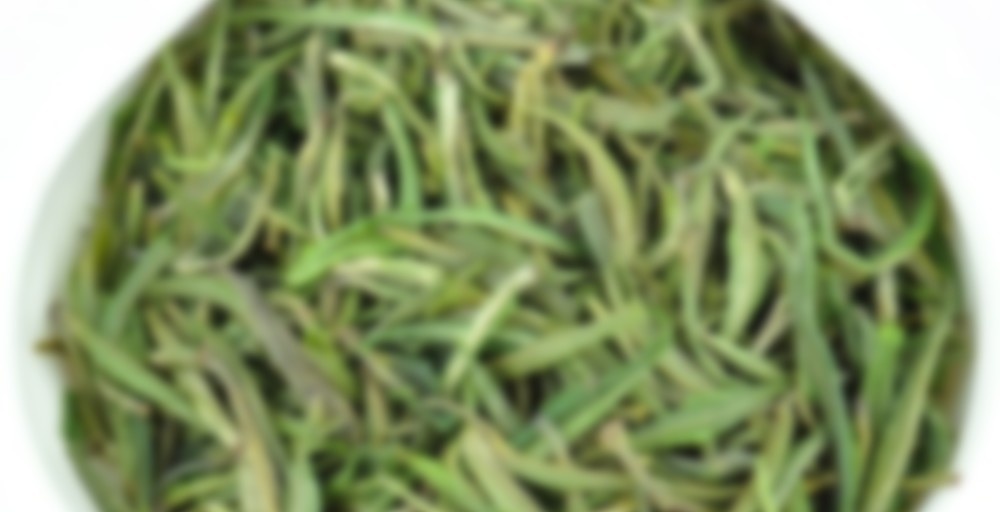 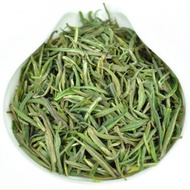 This tea was picked from the first flush of spring harvest high in the mountains of Simao. These tender young buds were processed in a way that is similar to how other premium small-leaf tea varietals (like Emei Sichuan Zhu Ye Qing) are processed elsewhere in China, but as this is from a large-leaf tea varietal of Yunnan (Camellia Sinensis var. Assamica), it retains some distinct characteristics and a bolder large-leaf taste. This tea is high in tannins which give it a penetrating vegetal aroma and a strong “umami” flavor which coats the mouth and throat.

These leaves are best brewed in a clear glass or chahai which shows off the tendency of the leaves to line up vertically, some floating at the surface and others sinking to the bottom.

The leaves are cute little snow pea pods that float on the water (unfortunately they don’t point downwards in my little 80ml gaiwan like I’ve heard they should). A couple of brown stalk tops in there but overall very high-quality whole leaves.

Rating: 82, only because I prefer the taste of sweeter and buttery teas

Fresh from 2016 march harvest – green fresh aroma from the bag, nice looking leaf too. Apparently its Assamica which is interesting.

I put 2g in a 12oz glass and hit it with 70c/160f. Strong vegetable aroma, like a really good soup, slightly buttery and nutty. Some of the leaves do that nice thing where they stand up in the bottom of the glass.

Wow, really umami and thick in the mouth. I cant tell you exactly what but definitely spinach-y tasting. There was a lot of flavour, apparently its high in tannins as well which must be adding to the taste a lot. Its really nicely strong for only 2g/12oz.

Zero bitter or sour taste, except a slight souring of the liquor when I got right to the bottom in amongst all those leaves. Slight mouth drying by the second cup, but also a big change in flavour from ‘lovely pungent savoury vegetable soup’ to ‘water youve just cooked your beans in’ – but still enjoyable, I’m just describing the drastic change of strength of the flavour.

Really interestingly umami and vegetal tea. I ended up doing 3 steeps from the 2G, hitting it with hotter water on the third and it was still ok, but not as strong as the initial.

Sounds like an interesting green tea. Gonna have to add this to my growing YS wishlist.

I’m not the word on green teas, honestly.. but ive had a lot of sencha, dragonwell, mao feng etc.. this was really super umami :D