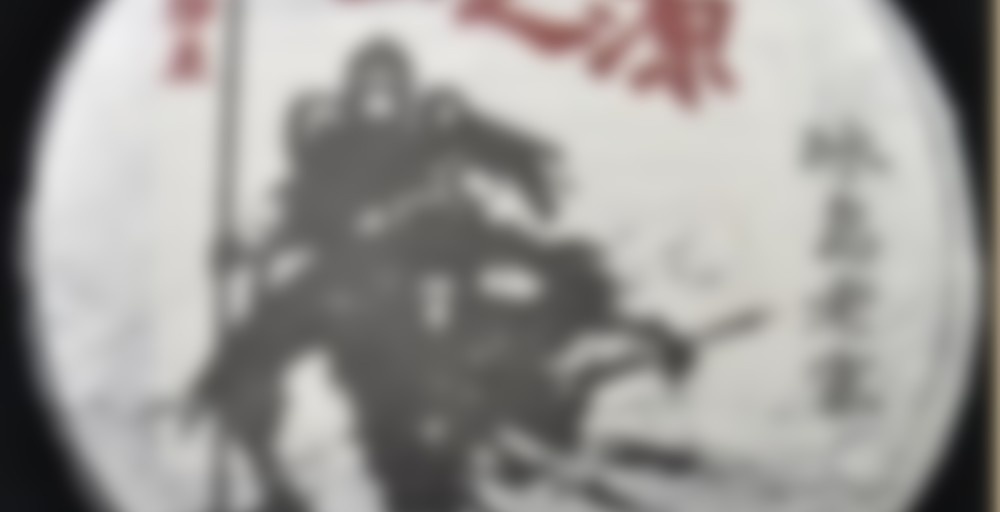 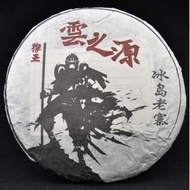 This actually reminded me a lot of white2tea’s 2017 Magic Mountain DNA in that they both felt rich without have any particularly intense identifiable flavors, but bringing very heavy weight body feels instead. I got heaviness in the chest and the neck that was just wonderful.

For the first few steeps of this one, my mouth went cool pretty quickly afterwards, and the coolness traveled somewhat down the throat. I also got that intense ear-popping yawning relaxing energy coming in.

About 6 steeps in, I started getting a stonefruity sweetness building up deep in my throat. That went on for the next 4 steeps or so, really tasty.

At around the 10th steep, the flavor got sort of watery and candy sweet. I did a few rounds of that, but it had lost the weighty body sensation, so I stopped at around 13.

(Oh, and I never really got any astringency or bitterness from this. Other reviews mention both, so I oughta disclose that I experienced neither, in case that’s useful info for someone.)

I believe this is my first Bing Dao tea. I’ve tried teas from around this area like the YS 2017 Nuo Wu, but nothing from Bing Dao itself. I actually have a full cake of this, have had since before the price ever went up. It is however sitting at the bottom of my pumidor in a tricky spot, so since I wanted to try it out while it was still young and review it while I was at it, I went ahead and ordered a ten gram sample of it just for this session. I usually like to give teas a couple months in my pumidor after arriving as I’ve noticed a correlation with a higher likelihood of having a rewarding session, but hopefully the two and a half weeks in this case is adequate.

I steeped the entire 10g sample in a 140ml gaiwan using water just off the boil. I did a short 5s rinse and tasted the wash while I let the leaves soak up the moisture for five minutes or so. The taste was still light and green at this stage, but the aftertaste was quite long-lasting. I proceeded to do a total of twelve infusions, the timing for these being 6s, 6s, 8s, 10s, 15s, 20s, 30s, 45s, 75s, 2 min., 3 min. and 5 min.

The first infusion was still relatively light both in terms of taste and body. The cha qi was already quite potent however. I don’t know if I’d call it very mild astringency or just a slightly prickly sensation, but in addition to that the tea had a slightly numbing effect on the tongue. I’m not sure if I’d quite go there myself, but I could see people calling the taste remotely fruity. Just after a couple of small cups, my head was already throbbing. I could feel the tea especially behind my ears and at the back of my head.

As is to be expected, the second infusion was stronger, but surprisingly also smoother. The broth was also a lot thicker, kind of fruity, with slight astringency in the finish. The steep that followed was similar. Strong, astringent, but without the hints of fruitiness. The qi was now moving to my upper back and chest. The fruitiness returned in the fourth infusion. The taste didn’t remind me of any specific fruits but tropical fruits in general. However once the tea cooled down I felt like I was tasting peach. At this point my airways began to feel clear and there was a slight cooling effect. The qi continued to be potent. I began to feel very relaxed, but at the same time like I could go do high-level sports.

Steep number five was very clean and fresh. I could also feel a slight burning sensation at the very back of my tongue and some astringency of course. This was followed by a brew that was a mixture of fruity, green, creamy and astringent which was an interesting combination. The seventh steep is where the Bing Dao tasted most like your typical young sheng. It was young, green, astringent, perhaps even a tad bitter. The taste was clean and the body decent. This seldom happens to me with raw pu’er and typically with only some really high-end dan congs, but I actually kind of liked the astringency in this steep.

The next two steeps were quite similar, clean and astringent, but the first was still kinda yummy for whatever reason and the second one quite savory. Steep ten was a bit of a surprise with some citrus to the taste now, maybe even hints of sweetness. The astringency was very strong now in the finish. In contrast the astringency was largely absent from the eleventh steep which brewed clean, juicy and oily with a pleasant taste to it. Steep twelve was the last one I did. At this point the tea was still going strong in terms of strength. The flavors had simplified and the astringency was back, but at no point was this tea really about the taste so it was hard to notice a huge difference. The tea could have likely gone on for multiple infusions, but I decided I’d seen most of what it had to offer.

Looking at the leaves at the end of the session, I saw hardly any broken leaves, burnt bits or even slightly more oxidized leaves with red edges. This is not something I see too often even with some really expensive teas, and it tells me about the level of confidence the people who processed the tea have in the quality of their material and the dedication they decided to put in.

This was a nice session. The thing I should note about this tea is that even though it was astringent to varying degrees in nearly every steep, it never became overbearing or distracting and while it wasn’t necessarily a good kind of astringency which is very rare to begin with, it was never really bad either. The qi is very noticeable, but never too aggressive and can actually make you feel quite good. The strength and longevity are good, but where the tea failed to impress me was the body. It’s not poor by any means, but not particularly noteworthy either. In terms of taste I don’t think there is that much going on right now, but how this tea sounds when described and when drunk are two different things. The tea is more enjoyable than it may sound, but at the same time it is not really a beginner-friendly tea and like with many other high-end pu’ers you are paying for many things besides the flavor.

Would I recommend this tea? That is a tough question. If you are looking to educate yourself and learn what a tea that you can trust to be Bing Dao as long as you trust Scott tastes like, I would recommend trying a sample. I myself invested in this tea for the long term. Saying if it will be worth it ten years down the line would be difficult. If you like strong tea with cha qi and find the astringency in this tea acceptable or perhaps even enjoyable, this is a tea that could be drunk now. I don’t think it would necessarily be worth its price tag though.

I had a good time with this tea. I didn’t necessarily love it, but I certainly wasn’t disappointed with it. I paid $170 for my cake. The price has gone up considerably since then. I found the quality to match what I paid for, but even at the current price if you really like the tea it’s probably worth it, especially five or ten years down the line. I’m sorry I can’t be more help than that, but if you’re looking to buy a tea as expensive as this, you ultimately need to trust your own judgment.

It’s…sheng. I’m sorry. Not bad for sheng. It’s got a nice floral and green sort of flavor to it, but there’s still a slight amount of that underlying formaldehyde bitterness.

Interesting that you get formaldehyde from sheng…what temp do you brew it at? Not saying you’re wrong of course – you taste what you taste, just curious :)

Usually 175-195, since I let the kettle cool a bit before reheating it. It got up to 205 at the end when there wasn’t a lot of water left. Obviously I’ve never had formaldehyde, but the taste reminds me of the smell of dissection day in class.

Fair enough – just wondered as some have a better time with the bitterness at lower temps. Maybe not in your case :) I only did one dissection in school and the teacher told us the froggie wasn’t preserved in formaldehyde but something else…still smelled bad though lol

Could formaldehyde be interpreted as gasoline-y or metallic?

This tea is really good, I might use the word phenomenal. It started out as a complex mixture of bitter, sweet, and astringent. There was no smoke. It was too young to have developed any storage tastes. I gave this tea sixteen steeps in a 150ml gaiwan. Over the course of sixteen steeps it gradually changed into a sweet tea with notes of apricots and stonefruits. I should note that the bitterness was never very strong. It was clearly present once the leaves had opened up but it was not what I would call an abiding bitterness. This is an expensive cake, the most expensive in Yunnan Sourcing’s 2016 lineup. With many vendors I would have to question if it was real Bing Dao material. But I trust Scott to be selling the real thing. Apparently the trees that this was picked from were between 100 and 300 years old making this gushu puerh, even if just barely. I also trust this claim because I think that Scott wouldn’t lie. With Yunnan Sourcing I have always gotten what I paid for. Now the big question, is this as good as the 2014 Yunnan Sourcing Autumn Bing Dao which was substantially cheaper. I’m on the fence about this. That tea was a phenomenal tea too. I think I will have to go back and drink that one again before I can decide which I like better. As to the tea quality, these were lasting leaves. I gave them sixteen steeps and I could go back for more. With longer steeps I would estimate I’d get between four and eight more steeps. But I don’t have the patience to start infusing these leaves for ten minutes at a time. In conclusion, this was one of the best young raws I have drunk. It had a nice punch to it in the beginning but not too much bitterness. It changed quite dramatically over the sixteen steeps I gave it becoming as sweet as I think any raw puerh gets. This one is definitely worth a sample of. I risked a whole cake without a sample because the 2014 Autumn Bing Dao from Yunnan Sourcing was so damn good.
https://www.instagram.com/p/BJfuxQ3DZ5J/?taken-by=allanckeanepuerhtea
https://www.instagram.com/p/BJfnghIDK8-/?taken-by=allanckeanepuerhtea
https://www.instagram.com/p/BJfwu8eDLDw/?taken-by=allanckeanepuerhtea

I also took a chance with this one without tasting it first. It is now in storage rehydrating from the long trip before I try it.

This was really good in my opinion.