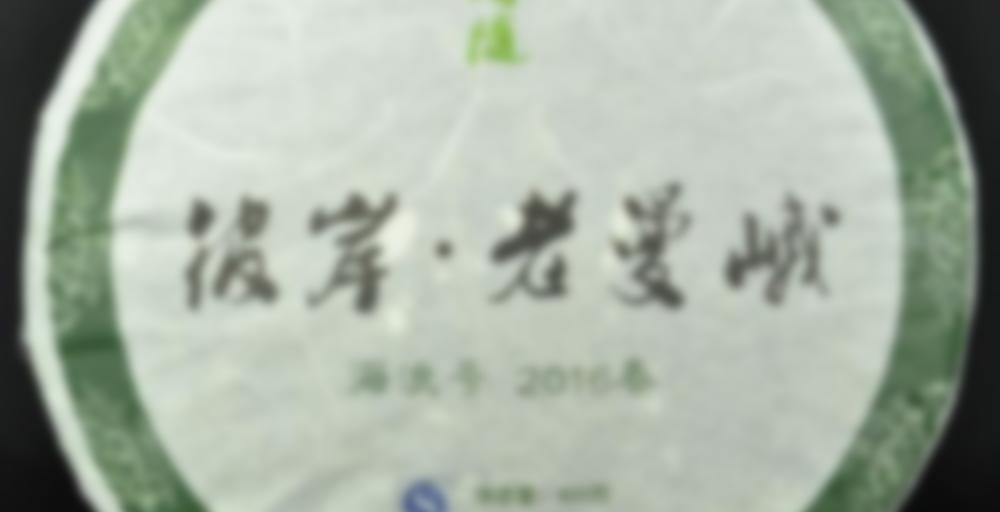 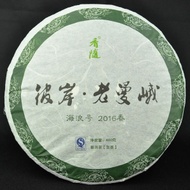 Spring 2016 harvested tea leaves that are 100% sourced from Lao Man’E Village (Bu Lang Mountains) tea from older tea trees. Hai Lang has long been active in Lao Man’E, Lao Ban Zhang and other Bu Lang villages. In 2008 he produced a Lao Ban Zhang and Lao Man’e blend called Lao Ban’e that has since become a classic in China and abroad.

Being pure Lao Man’e this tea is a bitter-fest. Not only is there strong bitterness, there is a strong aroma and very strong cha qi. The tea leaves are burly, and thick and go many many infusions before losing their flavor.

I have a fairly long history with this tea. Since 2017 I’ve bought several samples with the nagging question of whether I should buy a cake. There is no doubt that this is the best LME material I’ve sampled. It’s the thickest, oiliest , has the most stamina and aggressive yet comfortable qi. It’s also outrageously priced and although there are those to whom this region is the be all end all. I’ve read articles in which devotees of this area claim there are universes within the bitterness, thickness and returning sweetness and those who complain of lack of complexity and top notes are noobs who just don’t get it. For me I love this tra but have to be in a particular rare mood to crave it. During these times I get almost as much enjoyment from the less expensive smaller cake teas like 2019 Bitter End Extra from Bitterleaf or the 2010 Jie liang from YS. Granted this tea is significantly better but significantly more expensive. If I liked tea from this area as much as I like GFZ or Yibang I’d have a cake.

So the tea itself? It’s retained the same basic character as when young and doesn’t shapeshift much through the steeps. Intense but smooth bitterness that quickly turns sweet in the throat. Notes of quinine, grapefruit peel and slate, sometimes fennel. Steeps forever. Intense yang qi that I find similar to other Menghai area teas but not jangly like a factory tea. If yea from this area is your thing or if intense thick bitterness is up your alley this tea is a must try. As for me I’ve been debating caking this for 4 years but have yet to jump on it. I’d probably split a cake but am content to have a few smaller cakes of somewhat less expensive tea that satisfies my cravings for this stuff but no matter what LME I drink I end up comparing to this tea and ultimately it falls short. Anyone wanna split a cake?

Haha, I was like yeah I want to split a cake then I looked at the price! Maybe— maybe if I do a YS order this year, I’ll pick up a sample and get back to you on that cake split :P

Interesting tea! Described as a “bitter-fest” on yunnansourcing, I don’t say they are wrong. Bitter indeed, the same bitter compound that I taste in grapefruit. The tea is not fruity or citrus in any way, just had the same bitter chemical. Light steepings are required to keep this palatable. I let one go too long and it was intense. I have labeled up my package with a note to myself to let this one age a very long time.

Tis a burly one for sure.

.one does not drink this for taste, The first thing to know
.mind in the sky, That’s where you find the drinker
.feelings of the face, Known things start to disappear
.I’m not high, I promise you

/\/\/\/\/\/\/\/\/\
Yunnan Sourcing said this was a bitterfest of a tea and that’s absolutely correct. It was hard to sip through it, but it made Christmas Day very ‘light’