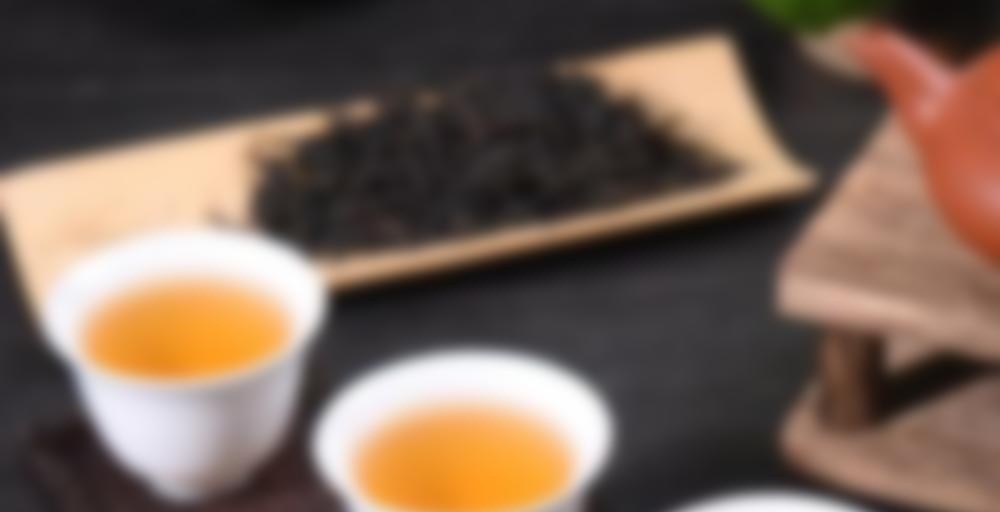 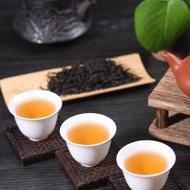 “Jiang Mu Xiang” Dan Cong (Ginger Aroma) is a unique varietal of Dan Cong. It’s a naturally occuring hybrid of Feng Huang area Shui Xian that has been selected over a period of two centuries. Jiang Mu Xiang Dan Cong grows at around 1000 meters of altitude in the north of Feng Huang in a village called Tou She. The plants grow naturally, many reaching a height of 3 or even 4 meters!

The taste of “Jiang Mu Xiang” tea is incredibly complex and powerful, while still remaining well within the realm of refinement and elegance! There is sweetness, spiciness (much like raw ginger), floral notes (like Ginger Flower), bitterness and astringency. The tea is very thick and lubricating and easily goes 10+ infusions when brewed gong fu style. Tea soup is gold-orange, the brewed leaves still mostly green with some wilted brown (as is typical of traditional Dan Cong processing).

Eastkyteaguy has captured this tea much better than I can. The dry aroma is promising, with ginger, apricot, sunflower seeds, and fruit leather. The aroma of the first steep is definitely ginger, combined with fruit, flowers, and sunflower seeds. The taste is of delicate ginger, butter, apricots, orchids and other flowers, sunflower seeds, and baked bread. All of the flavours are quite subtle. The second steep has more of the flavours Eastkyteaguy detected, including apple, pear, and pomegranate. It’s kind of like a fruity gingerbread, if that makes sense. The next couple steeps are more nutty and woody, though the ginger and fruit notes are still prominent. Grass, veggies, minerals, roast, and wood appear in later steeps, with orchids and ginger lingering in the aftertaste.

This is an intimidatingly complex Dan Cong whose nuances I’ve probably failed to appreciate. The flavour combination is fascinating, especially the realistic ginger note. It’s a lot less in-your-face than many Dan Congs, however, and requires careful attention.

P.S.: I’ve noticed that a few of the seals have separated from the walls of Yunnan Sourcing’s 25 g bags, making it impossible to close them. Has this happened to anyone else?

Thanks! I hope Steepster stays around long enough for me to catch up to you guys!

Thanks! I’ve almost run through my stash of YS Dan Congs and decided not to get more this year, unless I can’t resist the Black Friday sale. I tend to post a lot of reviews at once and then spend time sipping down those teas.

Also, keep the posts coming yourself! :)

This is another of the teas I finished back in May. If I recall correctly, I finished it sometime close to the end of the month. It was a tea I had a bit of trepidation about trying. Ginger is not one of my favorite things, and I had seen several other reviews of this tea that basically stated it was a subtle tea and may not be to everyone’s liking. I found that I shared those sentiments myself. Even though the ginger presence was thankfully not consistently overpowering throughout, this struck me as being mostly a very subtle, elegant tea not ideal for regular consumption.

Prior to the rinse, the dry tea leaves offered a clear ginger aroma supported by pungent fruit and flower aromas (almost like a mix of pomegranate and orchid) and a touch of bread-like character. After the rinse, the ginger aroma grew stronger while subtle red apple and vegetal scents emerged. The first infusion then saw the ginger aroma continue to dominate, this time mostly overwhelming the other scents offered by the leaves. In the mouth, notes of ginger, baked bread, butter, and orchid were chased by pungent fruity (pomegranate) and vegetal notes that I could not quite place before the ginger reasserted itself on the swallow. Subsequent infusions saw the nose turn nutty, fruitier, and more vegetal. New notes of minerals, roasted almond, red pear, wood, cinnamon, lemon zest, hibiscus, green pepper, and grass emerged in the mouth alongside subtler notes of red apple, radish, and turnip greens. The final infusions offered mineral, wood, roasted almond, and ginger notes with some barely perceptible fruity and vegetal undertones.

This was an interesting oolong, but it was not one that I would be in any rush to reacquire. I appreciated that the ginger aroma and flavor was carried throughout the session and that the tea offered a unique range of aroma and flavor components beyond the ginger, but I found some of the tea’s most appealing qualities to be a bit too subtle in most places. As mentioned earlier, I am not the hugest fan of ginger, so this tea was likely going to be a tough sale for me anyway. I’m just happy that I enjoyed it more than I thought I would. I guess that says something. People who enjoy the smell and taste of ginger would probably enjoy this tea quite a bit. It’s still not my thing, but I enjoyed my experience with this tea and would not caution fans of Dancong oolongs to avoid it.

Lives up to its name. Thankfully Duck Shit Aroma does not. An excellent Dancong. I get ginger, elderflower and Szechuan peppercorns. I drank this with pan roasted quails with a sauce that was a cross between hoisin and plum sauce with stir fried Gai Lan. Perfect match,

The aroma of this tea is incredible. It truly smells like warm, spicy, sweet gingerbread.

1st infusion 180˚F
The flavour is lighter than the smell, but it is so good anyway. I am so consistently impressed by Yunnan Sourcing’s Dan Cong oolongs and red teas!

Wow, that was hard – I literally had to not come here for a few months due to money constraints. So there has been a lot of sipdowns going on in the household. Then I caved and had to make some orders as I ran out of some staples!

Thought I would try this on a whim – I don’t seem to have much luck with rou gui or cinnamon-type oolongs, the ones I have tried seem a bit too easily dissipated, losing flavour rapidly, and I thought this one sounded similar.

But this one is really good, with nice longevity, the ginger aroma lasting even as the tea soup gets thinner.. I think I was up to ten flash steep style and it was still giving. Its an interesting flavour that i have no idea how its imparted – doesn’t taste fake but also doesn’t quite taste real, but works with the rest of the tea, it isnt too sweet or too much of anything bad, really. But kind of dessert-esque. Nice bitterness lingering in the back.

A hard one to place but happy with it & glad to have found a dan cong like this that gives out as much as it should for the price.

Great to see you back, Rasseru!

I feel ya on the price. I am worried I won’t be able to afford much tea this year, but then I discovered Wuyiorigin. The owner is a Wuyi local and her husband is from Chaozhou so both have access to the real stuff (yancha and dancong) and sell at very reasonable prices. I highly recommend checking them out. Contact Cindy directly to get the info you need. She’s a accommodating.

tanluwils – I had heard of wuyiorigin but now signed up to the newsletter.

Good pricing too if the quality is high! I’ll hunt for some reviews and try some out

Yes! I’ve had a good number of their teas and can say I need not look any further.

Also meant to add: check out reviews from BigDaddy. He helped me along with getting a better grasp on yancha and dancongs in general.