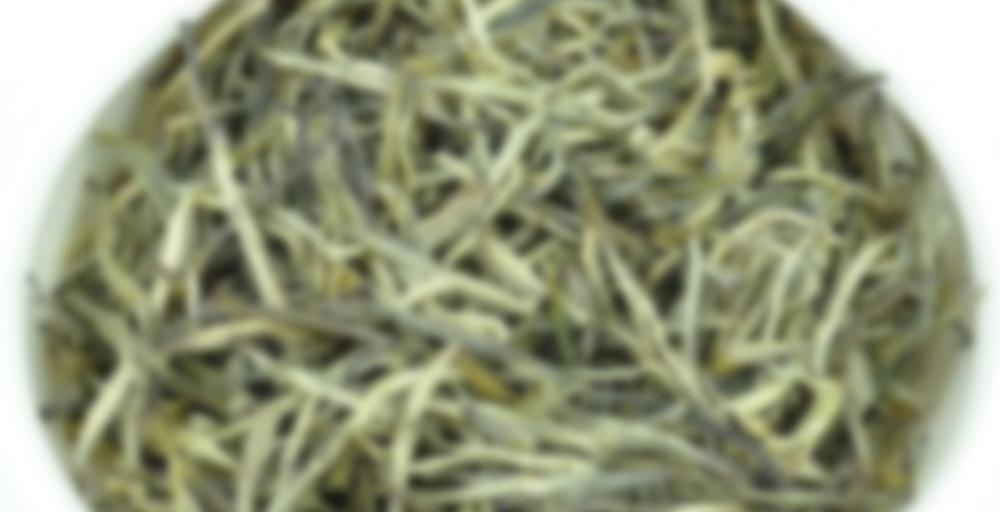 by Yunnan Sourcing
68
You

A unique varietal of white tea grown in the high altitude mountains of Ai Lao range in the eastern part of Jing Dong County (Simao Prefecture).

The tea processing is something in-between white and green tea. It has a strong thick aroma and hints of sugarcane and wheatgrass.

The leaves are extremely fine and due to expert processing the small hairs on the leaf have been preserved.

This was the only white from its YS order that disappointed. The flavor isn’t bad, but the astringency is immediate and intense, oddly so for a white tea. Maybe it would be better brewed some other way, but it’s not great gongfu style.
Edit: I considered throwing out the rest of my supply, but instead have been adding some to rooibos whenever brewing the rooib a second time, and it does a decent enough job of perking things up.

Wow. This tea started off as kind of a shocker for me because I really wasn’t expecting that lush, fruity-floral smell when I opened the bag. It definitely reminds me of jasmine, a note suggested by the seller. There’s an almost cotton candy or grape candy kind of scent to the dry buds in the bag, but after putting then into a pre-warmed gaiwan I’m getting more toasted sugar notes and definitely some kale-like vegetal aromas, and believe it or not a nice charred barbecue smell. There are definite notes of sweet corn on the cob, fresh in the husk. After the first infusion, the leaves have a really vegetal scent and also a strong peach aroma and some underlying nuttiness. The brew is a pale yellow color and smells like sweet corn, primarily. I wasn’t expecting so much strong aroma and flavor out of these leaves, which, by the way, are very pretty on their own, covered in plenty of white fur, mostly buds, but very thin and wiry, like silver needles on a diet.

The flavor of the first infusion reminds me of cooked broccoli, and a bit nutty as well. It has some faint peachy notes if you smack your tongue with it. There’s a little bit of dry bitterness in the finish, along with a cooling sensation on the lips, tongue, and roof of the mouth. After a while, the aftertaste starts to remind me of osmanthus, faintly peachy-honey-floral.

Second infusion smells a bit more floral, and indeed, the taste is more floral as well. There’s a sort of earthy, white peppery undertone to the flavor that’s just as strong as the fruity-floral overtones, and it’s a weird sort of flavor tug-of-war that really mutes the texture of the tea, but if you swish the tea around in your mouth those osmanthus and jasmine-like floral notes really shine through.

The description on Yunnan Sourcing says this tea goes through a processing that is something in between green and white, so I did an experiment with this tea and decided to try brewing it two ways, one like a green tea and one like a silver needle white tea (the first time using 176F/80C water, and the second time using 185F/85C water, slightly different infusion times and amounts of leaf each time too, per my usual tastes for the respective types). I found that when brewing it with the hotter water like a white tea, the first infusion had a pretty dry, vegetal, woody flavor, with none of the sweet fruit or floral overtones, and a bit of the sweet corn aftertaste. The second infusion is more vegetal, and, as with the first brewing method, there are some fruity-floral overtones underscored by a dry peppery taste. The third infusion was even more floral, but with similar overall notes.

The verdict? This is a tough tea to tame. The dry bitterness in the leaves is eaily coaxed out, and if it was me, I’d err on the side of treating it like a nice fuzzy bi luo chun or mao feng, or other delicate greens. The cooler brewing temp kept the lighter flavors more predominate, with the strong bitter and earthy tones a little more reasonable.

Drinking this tea is like a balancing act that never finds a steady balance. I can’t decide how I feel about the conflicting flavors, which seem to counter each other rather than complement each other. If I could remove some of the bitter, dry, earthy tones I’d love this tea, but for now it’s more like “wow this is tea is awesome… except for half the flavor”. It’s no yin and yang, more like Tom & Jerry.