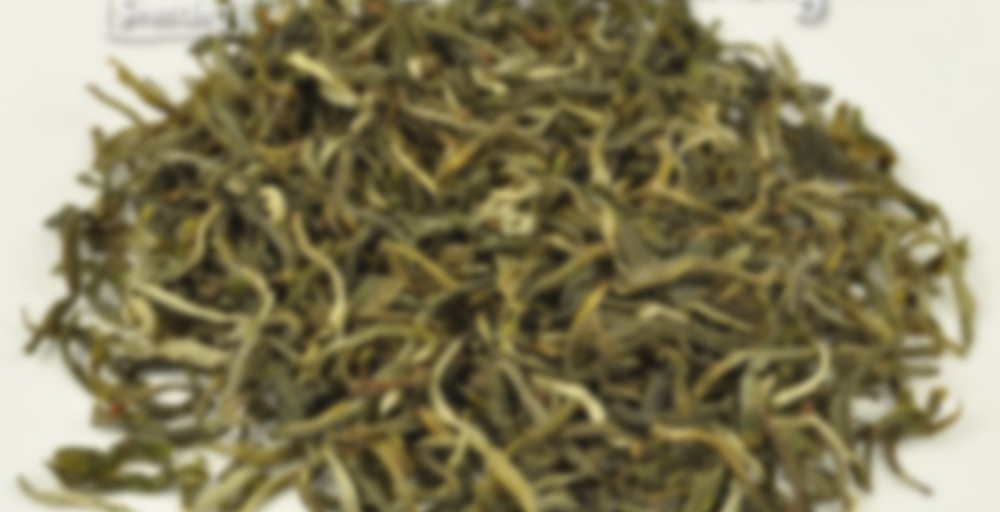 This lovely high mountain green tea from Wu Liang mountain of Simao is organically grown, but is no longer certified! “Jade Tips” is a premium tippy pick that features small leaves with a powerful thick aroma and pungent umami taste. Yunnan Large Leaf varietal green tea that is picked in a very small window of time and then immediately processed to preserve it’s green and fresh character. The taste is stronger and more vegetal than the “Wu Liang Mao Feng” which has floral and fruit notes. The after-taste and mouth-feeling is long-lasting and pleasantly stimulating!

This was my most recent green tea sipdown. I spent the better part of a week finishing a 50g pouch of this tea alongside several samples of other teas. Truthfully, I was and still am a little unsure of how to rate it. On the one hand, I greatly enjoyed it and found it to be a very satisfying tea, but at the same time, the leaf quality appeared to be utter crap and there were a few rough edges to it that irked me more and more the longer I spent with it. Overall, though, I would still have no issue recommending this tea to anyone looking for a more powerful green tea.

Prior to the rinse, the dry leaf material emitted aromas of roasted chestnut, hay, and grass. After the rinse, I found an emerging smokiness on the nose as well as a stronger roasted chestnut aroma and some soupy umami character. There were real no changes on the nose with the first infusion. In the mouth, I noted flavors of grass, hay, and roasted chestnut to go with something of a pronounced umami note. Following infusions saw the tea liquor become drier and more astringent as a hint of smokiness started to come out in the mouth. New impressions of butter, malt, straw, lettuce, asparagus, bamboo, sour apricot, seaweed, spinach, lemon, wood, and minerals also appeared. The later infusions primarily offered lingering notes of minerals, lettuce, malt, and spinach alongside hints of roasted chestnut and bamboo.

In some respects, this tea reminded me of both the Bao Hong and the Wu Liang Mountain Mao Feng I recently tried. In terms of both smell and taste, I found that it fell rather neatly between those two teas. Had this tea not been so dry and puckering through the majority of the review session, I would have had no issue rating it a 90 or higher because it was that good in terms of smell and taste. Unfortunately, that little bit of persistent roughness in the mouth and the somewhat lacking appearance of the leaf motivated me to subtract a few extra points. To be fair, however, this was still a very good, very satisfying Yunnan green tea. I could see those who like their green teas a little brawnier being thoroughly into this one.

What can I say, I’m a total sucker for fresh spring harvests (xincha).

This green is superb and it trumps the 2016 Wuliang mao feng. Nice pungent apricot/peach blossom aroma. Much more robust than I expected. It went for more than 6 steeps – and still had good flavor. There’s a hint of smoke that reminds me of its rural origins, rather than dominating the fruit, floral, and crisp notes, IMO. It has that wonderful, penetrating cooling sensation that i associate with sheng pu’er.

The delicate leaves are a gorgeous shade of jungle green and are a bit broken, but that doesn’t seem to effect the drinking experience. Tea liquor is very clear and with a jade hue (hence the name?).

Big shout out to Scott for sourcing such a broad range of fresh greens.