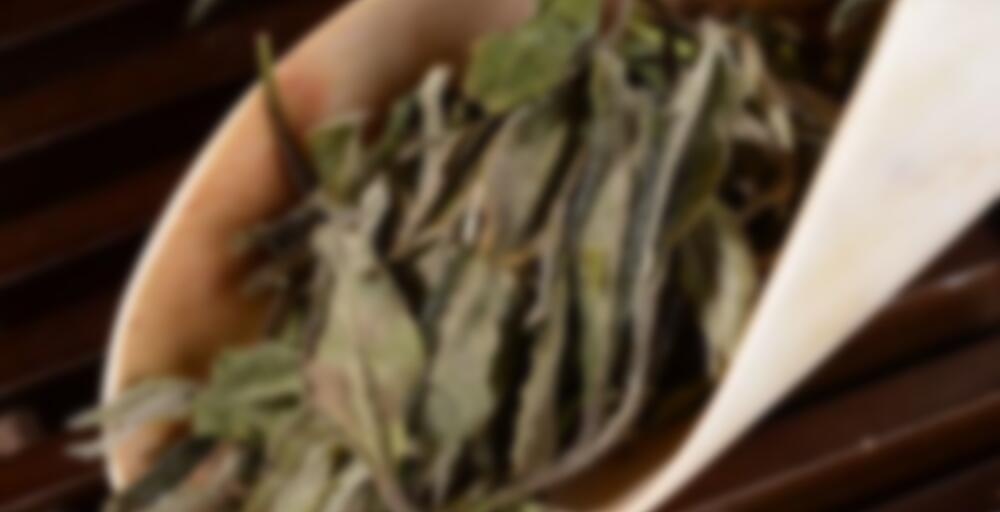 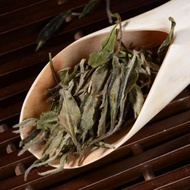 The taste is sweet and fruity, with very little astringency. We recommend brewing with 90C water gong fu style to get the best taste from this wonderful tea!

This was another of my October sipdowns. I think I finished my 50g pouch of this tea back around the start of the fourth week in the month. This may come as a shock to some of you, but I would honestly place this as perhaps the best Fuding Bai Mu Dan I have tried to this point. I, of course, have not tried a tremendous number of such teas in recent years, but I have had some nice ones over the course of the year, and of the ones I have tried, this one ended up being my favorite. That is saying something too considering that several of the others I tried were also excellent.

Prior to the rinse, the dry leaf and bud mix produced aromas of pine, honey, sugarcane, straw, and almond. After the rinse, I detected new aromas of peanut, hay, and cucumber. The first infusion then introduced a scent of butter. In the mouth, the tea liquor offered up notes of pine, straw, hay, butter, almond, and sugarcane that were chased by hints of cream and peanut. The bulk of the subsequent infusions introduced soft peony and cream aromas as well as scents of lemon zest, malt, and basil. Stronger cream and peanut notes appeared in the mouth alongside belatedly emerging cucumber notes, slightly spicy, peony-like floral impressions, and notes of minerals, lemon zest, zucchini, honeydew, nectar, malt, oats, and apricot. I also noted some subtle basil, chamomile, and thyme notes that lent a cooling quality to each swallow, lingering in the mouth afterwards. By the time I got to the end of the session, the tea liquor was mostly washed out and was also beginning to display mild astringency, though I was still able to pick up on notes of minerals, cucumber, cream, hay, straw, and pine that were chased by fleeting hints of butter, malt, chamomile, basil, and lemon zest.

This was such a fun, quirky, and satisfying white tea. It was very approachable, though it also displayed tremendous depth, complexity, and longevity. I should also note that I found the mouthfeel of the tea liquor to be consistently appealing. Aside from the little bit of astringency that emerged on the lengthier final infusions, I really do not have any complaints with this tea. I think fans of Bai Mu Dan and those who are curious about Fuding white teas would be tremendously pleased with this tea and recommend it without any hesitation.

2nd try end of 2018:
Nutty, perhaps chestnut aroma. Smooth taste. Delicious. I saw someone else talk about ageing tea, so perhaps something has happened here in the past 12-18 months. I have thus changed my score from 48 to a solid 80.

First try 2017:
I find this tea very bland and characterless. I tried cold steeping it too in the fridge and it produces a fresh mountain spring type taste, which is OK, but not as good as green teas I cold steep to save them. This will go to the back of my cupboard.

I put a kilo of this tea in my last YS order as a white tea aging experiment. I somewhat enjoy fresh white tea, but I’ve really liked the tastes of the aged whites that I’ve had, and I thought it would be fun to watch this one transform over the years.

Flavors of dry grass and flowers, peach, and fresh herbs like basil or thyme. It has a minty cooling quality that lingers in the mouth. Somewhat malty, but certainly different than black tea type malt. Very tasty! It may prove harder than I expected to leave this one alone and let it age, though the kilo should last me quite a while.

High quality white tea is a real treat. I was considering purchasing some of this one, as I prefer the Fujian whites to the Yunnan ones, but I purchased a 250g of baimudan from Wuyi Origin because it’s the best white tea I’ve ever purchased. I will add some of YS’s Fuding white tea to my next order just to compare.

Sounds good! I haven’t ordered from Wuyi Origin yet, but I’ve been thinking about it

Ack I missed the WO one when I made the order, should have got some

I think high quality white tea is one of the rarer treats of the western tea drinker. It’s really easily overlooked because of the lack of hype. This keeps the prices lower, through!

This tea is sort of like what I would imagine eating a buttercup to be like. The body is smooth, with a longish finish. Not a lick of dryness or bitterness/astringency. The texture is almost silky, which is a new experience for me. Some really smooth, soft floral notes (white flowers? I would say peony BUT.) and a very light hay/dry grass flavor. It’s not winning any awards for hitting you over the head with a flavor mallet, but it’s sweet and delicate and very pleasant.