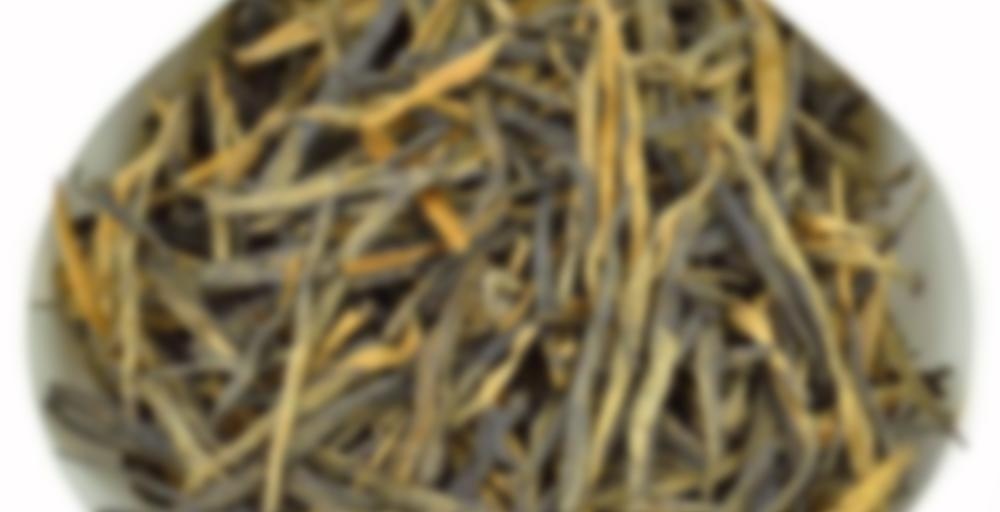 This tasty black tea is composed of Spring 2017 wild arbor assamica tea from the same plants as we used for our Spring 2014/15 Da Hu Sai village raw pu-erh cake!

Tea is picked, fried, rolled, wilted for about 24 hours in warm shaded area and then finally dried to produce this lovely pure assamica black tea.

The feeling of the tea is thick in the mouth, the taste peppery, floral and sweet all at once. This traditional process for Yunnan black tea dates back more than 100 years!

The dry aroma is of malt, pine, tobacco, and gooseberries. The first steep has notes of malt, tobacco, baked bread, honey, wood, roasted almonds, and tannins, and the tobacco and tannins linger in the aftertaste. There’s a sweet potato aroma in the teapot that fails to translate into the tea. The second infusion adds notes of molasses and caramel. I can faintly detect orange zest, although that’s likely because Eastkyteaguy pointed it out in his review. The next two steeps focus on baked bread, honey, and tobacco, with tannins, caramel, wood, cream, hay, roasted nuts, and very faint chocolate in the background. Sadly, no berries or sweet potatoes are to be found. I get some eucalyptus in the fourth steep. These flavours gradually fade, and the session ends with malt, honey, baked bread, tannins, earth, wood, and minerals.

This is a very complex tea with some unusual flavours. However, I was expecting berries and chocolate, as in the 2015 version, and was a bit disappointed.

This was my third sipdown of the week. It seems that I have been really motivated to finish some of the teas I have been holding on to for a while. Going through my tea stash to locate this tea also made me realize that I have a larger number of 2017 and 2018 Yunnan Sourcing black teas than I thought, so expect many more black tea reviews in the coming months. Anyway, I decided to work my way through what I had of this tea mostly because the previous two Yunnan black teas I had finished were dragon ball teas, and well, I wanted to get back to brewing loose leaf black tea. I recalled liking the autumn 2016 version of this tea and knew that I had this spring 2017 version somewhere, so I went through my stash, located it, and started working my way through it. I found it to be a very satisfying and likable Yunnan black tea, but I did not enjoy it quite as much as the previous offering.

Prior to the rinse, the dry tea leaves produced aromas of malt, cedar, sweet potato, tobacco, pine, and eucalyptus. After the rinse, I detected aromas of baked bread, honey, orange zest, black pepper, molasses, and brown sugar. The first infusion brought out aromas of cream, cinnamon, earth, and camphor. In the mouth, the tea liquor offered up notes of malt, cedar, cream, baked bread, pine, sweet potato, earth, and orange zest that were chased by hints of honey, tobacco, cinnamon, and eucalyptus. The subsequent infusions introduced aromas of vanilla, roasted almond, chocolate, and caramel along with some subtle smoky scents and even stronger herbal and spicy components. Camphor, brown sugar, molasses, and black pepper notes came out in the mouth with stronger and more immediate tobacco, honey, cinnamon, and eucalyptus impressions. New impressions of minerals, vanilla, roasted almond, lemon zest, caramel, and chocolate also appeared along with some subtle hints of smoke. As the tea faded, the liquor emphasized lingering mineral, baked bread, malt, cream, chocolate, roasted almond, and earth notes that were supported by accents of honey, molasses, sweet potato, camphor, tobacco, and eucalyptus.

This was another very good, very solid Yunnan black tea in a long line of very good, very solid Yunnan black teas offered by Yunnan Sourcing. I noticed that this tea revealed more on the nose from the very start than the autumn 2016 offering, and while both teas were similar in the mouth, the autumn 2016 offering struck me as being more pungent and prickly. This was a smoother, subtler tea in comparison, and though it was more or less as good as its predecessor, I actually enjoyed the prickliness of the other tea and found myself missing it in this one. Still, this was a rock solid Yunnan black tea, one that fans of such teas would likely enjoy.

This is a nice, albeit somewhat unremarkable hong cha. In the smell I get notes of malt, brown sugar, chocolate, nuts, blackberries and sweet pepper. The taste is balanced and can sometimes appear a little flat. I noticed notes of malt, cherry wood, orange zest and bread crust. Aftertaste is not very long and displays even more of the citrusy qualities.

The tea has a medium body with a liquor that’s not very coating, although it has decent thickness. The mouthfeel is a bit powdery, but it becomes smoother when cooled down.