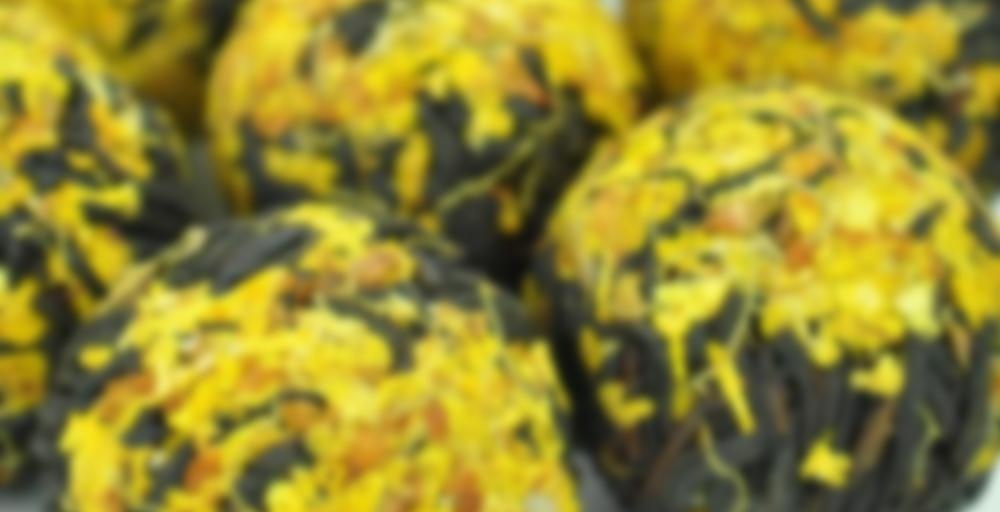 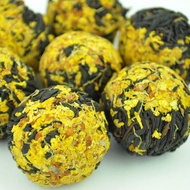 by Yunnan Sourcing
74
You

What happens when you mix just a touch of fresh premium grade osmanthus flowers with our luscious Yi Mei Ren “Needle” Black Tea from Wu Liang Mountain? The answer is: A chocolatey, floral and fruity tea that smells and tastes great! The osmanthus flowers are not at all overpowering and were blended in just the ratio complement the already wonderful Yi Mei Ren black.

When you open the pouch holding these take in the scent of the tea and revel in it’s commingled essence! In the early steeps the dragon ball will gradually unfurl and the tea soup flavor and aroma will gradually gain strength. Once the leaves and flowers are un-furled, the the tea will provide several enjoyable chocolatey sweet and fruity/floral with excellent viscosity and complex mouth-feel and aroma. Later steeps are mild and enjoyable and the tea avoids collapsing into astringency or unpleasantness of any kind!

“Yi Mei Ren” (彝美人) means literally Yi (Minority) Beauty. This tea is named “Yi Mei Ren” as its made from Wu Liang Mountain material, an area inhabited primarily by Yi Minority people and bears similarity to both and oolong and a black tea in its fragrance and taste. Yunnan large-leaf varietal material is used and the tea is wilted and fermented like a black tea, but for a longer period of time with several intervals of vigorously shaking the leaves. This promotes more thorough wilting/fermentation and leads to it’s darker color.

The brewed tea is highly aromatic with a chocolaty sweet taste with no noticeable astringency. The tea liquor is super clear and deep gold with tinges of red if brewed longer. Due to the higher level oxidization this tea can be stored for several years with subtle changes in aroma and flavor.

Same garden as our Yi Mei Ren, but processed from more mature leaf into a “Needle” shape. Taste is more chocolatey and less floral, but overall not very different.

Starts off sweet and thick, but settles into more of a traditional osmanthus type of flavour over the session. I’m not a massive fan of osmanthus tea but I do think it’s better with the black tea used here over on its own! This is one of the prettiest looking dragon balls I’ve ever owned – sad to see it go for that reason. I feel like my past rating of 87 is too high, and perhaps amped up by excitement at how gorgeous looking this tea is in general? I liked it, but not that much so I’m lowering the rating…

Also proud of myself for getting in so many sipdown over the last week – I’m gonna need it, with advent season right around the corner!

Here is another sipdown from last month. I discovered several black tea dragon balls from Yunnan Sourcing in my tea hoard, and having recently finished the fantastic spring 2017 Yi Mei Ren, I just had to try this tea. Unfortunately, I did not realize that this dragon ball was made using the similar but not nearly as satisfying Yi Mei Ren Needle black tea. I was expecting an abundance of sweet, floral, fruity flavors, but instead, I ended up getting more flowery notes springing from a muted, fairly nondescript black tea base.

Prior to the rinse, the dry dragon ball emitted aromas of osmanthus, malt, and straw. After the rinse, I detected new aromas of cream, baked bread, and sugarcane as well as subtle cocoa scents and a greatly amplified osmanthus aroma. The first infusion introduced aromas of anise and pine. In the mouth, the tea liquor offered notes of osmanthus, pear, malt, cream, butter, and pine that were backed by hints of baked bread, sugarcane, straw, and pineapple. The subsequent infusions introduced aromas of raisin, licorice, earth, and rose. Anise notes appeared in the mouth alongside hints of pine, smoke, roasted almond, apple, and vanilla as well as barely perceptible cocoa. Stronger and more immediately noticeable impressions of baked bread, sugarcane, and straw also came out alongside notes of licorice, raisin, earth, minerals, orange zest, and rose. There were also very subtle menthol hints on each swallow. As the tea faded, the liquor settled and emphasized notes of minerals, osmanthus, malt, vanilla, butter, orange zest, and pear that were chased by fleeting hints of straw, roasted almond, pine, cream, baked bread, earth, raisin, and menthol.

This was not a terrible tea, but it also struck me as being decidedly unbalanced and unfocused. The osmanthus tended to dominate throughout most of the session, and it seems that the base tea just did not have enough strength and character to rein it in and pull everything together in a satisfying fashion. If you really like osmanthus and aren’t looking for something with more depth, then you’ll probably be into this, but if, like me, you are looking for a tea with balance and great interplay between the tea base and flowers, then you should probably look elsewhere.

Not quite as nice as the other dragon ball I tried recently, but delicious nonetheless. Floral notes are most prominent, I did not note anything extra special about the black tea though.

2nd infusion, tea more frank, drier and tonic, but keeps its voluptuousness, the fruits are less sugar but always present in all subtleties, we note a slight nascent astringency.

3rd infusion, We drought this drought, but we left on the fruit yellow (stewed), slight bitterness and agreeable by its presence which equalizes the tea, then notes of malted honey.

Too bad to have had only one ball of this tea ….