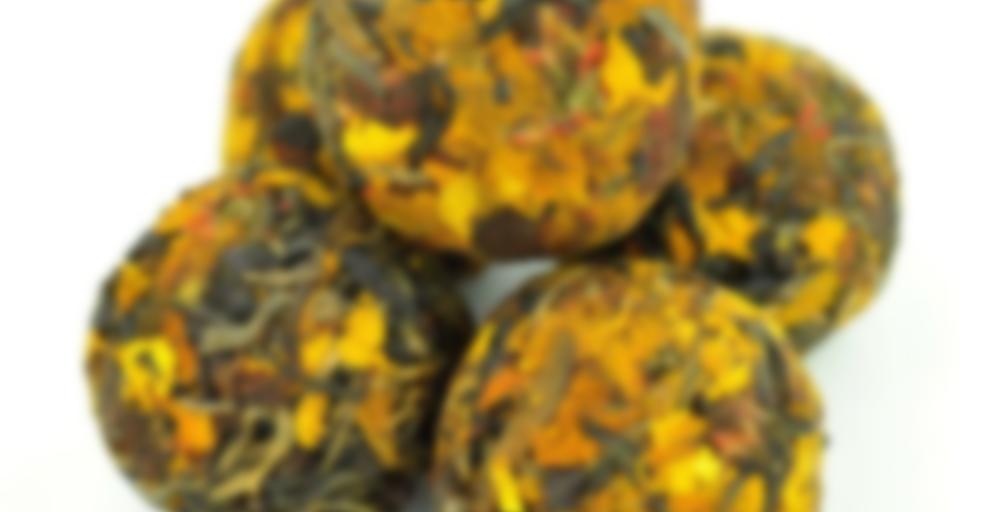 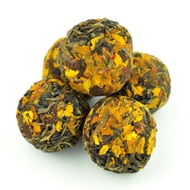 What happens when you combine robust Yunnan Black Tea with Snow Chrysanthemum Flowers? You get a highly complex and enjoyable tea both wonderful to drink, and to behold!

Snow Chrysanthemum flower tea is a rare and highly sought after high altitude flower tea from the Kunlun Mountains in Xinjiang province. The tea is picked and sun-dried once a year then hand-sorted into various grades. We offer only the highest grade available!

A lovely tea with strong sweet and spicy flavor, it can be brewed alone or with other teas (like ripe pu-erh). It’s a great tea to drink after dinner and has no caffeine. It is thought that properties within the chrysanthemum flower have a calming effect and aids sleep. In the Traditional Chinese Materia Medica Snow Chrysanthemum is described as aiding respiratory fitness, regulating blood pressure and preventing cancer.

This black tea together with the Yunnan rose flowers makes for a thick and viscous tea, complex and interesting, while lasting many infusions making it a worthwhile newcomer to our offering here at Yunnan Sourcing!

Finished this one off Grandpa style over the course of a full afternoon. It seemed fitting to sipdown this last black tea/snow chrysanthemum dragonball blend now that we’ve finally had our first proper snowfall of the season! While I love drinking snow chrysanthemum year round; there’s something to be said about the way the thick syrupy liquor and deep medicinal floral, chenpi-like orange peel, and herbaceous dill notes just hit HARDER when it’s cold out. Feels like it’s doing something good for yourself. So cozy and soothing.

I’m never sure if I should try this one or not and then it gets bumped out of my cart to make room for something else…but if it’s sort of chenpi-like maybe I need to make sure it goes in a future order.

This was my most recent sipdown and a tea I had been looking forward to since trying Yunnan Sourcing’s Royal Chrysanthemum Flower and Big Snow Mountain Black Tea Dragon Ball (still need to post a review for that one). Unfortunately, I did not enjoy it nearly as much as the other tea since I found the snow chrysanthemum to frequently overpower the tea base. Yunnan Sourcing’s Big Snow Mountain of Mengku Black Tea is not the most powerful or assertive Yunnan black tea, and I did not think it had room to shine when paired with these snow chrysanthemum flowers.

Prior to the rinse, the dry dragon ball produced aromas of chrysanthemum, dill, mandarin orange, and malt. After the rinse, I picked up new aromas of cream, butter, cinnamon, and black pepper as well as amplified scents of chrysanthemum and malt. The first infusion introduced subtle aromas of oats and red grape. In the mouth, the tea liquor offered notes of cream, chrysanthemum, butter, oats, and dill that were chased by hints of mandarin orange, roasted almond, baked bread, red grape, and sweet potato. The subsequent infusions introduced aromas of baked bread, camphor, ginger, nutmeg, caramel, and eucalyptus alongside subtle scents of sweet potato. I picked up a little more baked bread, red grape, sweet potato, and roasted almond in the mouth as well as notes of minerals, camphor, eucalyptus, ginger, cocoa, nutmeg, caramel, and red apple. I also noted belatedly appearing cinnamon, malt, and black pepper impressions and hints of earth and plum. As the tea faded, the liquor continued to offer chrysanthemum, mandarin orange, dill, black pepper, cinnamon, and red apple notes that were supported by hints of roasted almond, baked bread, earth, red grape, and sweet potato.

This struck me as being an okay chrysanthemum black tea. It was nothing special. There wasn’t a lot of integration of snow chrysanthemum and black tea aromas and flavors. The notes one would generally get from snow chrysanthemum flowers dominated the proceedings here while the contributions from the tea base were always playing second fiddle. I think a more assertive, robust black tea would have worked better for a blend of this type.

Chrysanthemum teas are so tricky and prone to going overboard…

This lovely tea is refreshing, sweet, and yet still robust in flavour. The chrysanthemum takes an already great black tea to new depths, the two ingredients dance together to produce a rich flower and chocolate flavour that ends off with the most pleasant notes of wildflower honey. I would give this tea a higher score if it were easier to brew, I find the dragon balls are too large and are probably meant for making a whole pot of tea or gong fu brews (not really my brewing style for black tea). This is hands down one of the nicer black tea blends I’ve tried.