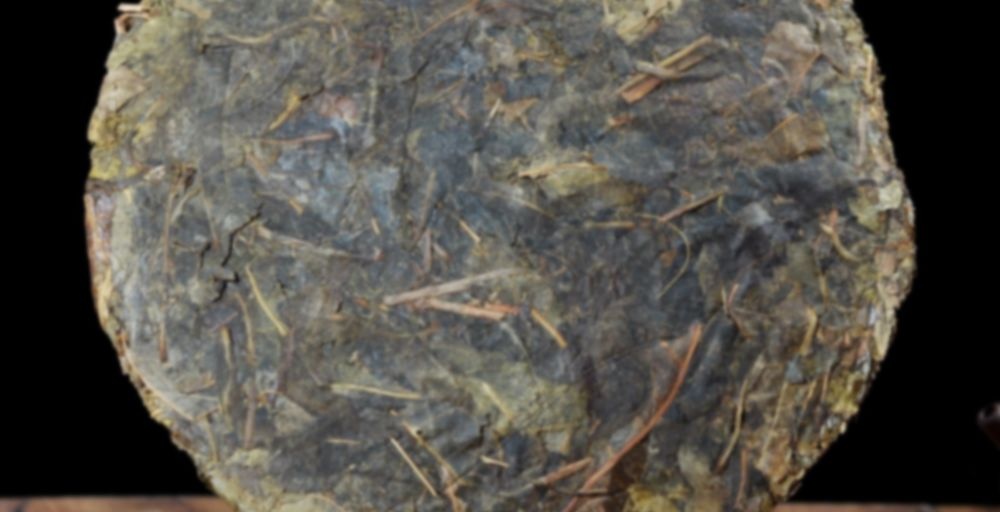 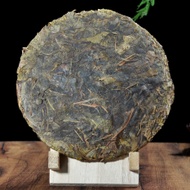 This cake is an excellent example of how an aged “Huang Pian” (黄片 matured leaf) raw pu-erh tea cake can taste so good. Picked from 2000 Spring matured leaves from Yi Wu area tea trees and then pressed and stored in Kunming for 17 years!

This tea brews up an active and bright (both in color and taste) tea soup with a kind of of spicy herbal sweetness. No astringency or bitterness, just ultra smooth sweet honey goodness!

This is unlike any other tea you have ever had, and at the same time its delicious and enjoyable!

This one is kind of hard to describe, honestly. It really is like no other tea. The flavour is mild in the sense that no one note dominates it – it’s a gentle tea – but the overall taste is quite strong. It’s softly sweet, I suppose. I’d recommend it purely on the basis that it truly is unique.

This is one of the weakest teas I’ve ever gotten from YS and honestly I would think they should not be selling it at this price. However, it seems that I am fairly isolated in this assessment, which means it’s good that they indeed sell it – there clearly is demand for it.

The tea is old, but doesn’t seem all that much aged. Its taste is not very well-defined and quite flat, the aftertaste is short and dry. Although the mouthfeel has a decent bubbly nature, the medium to light body also drags the experience down below average. Moreover, the tea is not very infusable, I am finding it hard to get much more than 100ml/g out of it.

Now, the aroma does have some interesting notes to it, mostly raisins, bog, sweet wood, but also some flowers and butter scones. The taste is sour, metallic with a nutty, herbal, and spicy character and an underlying floral sweetness. There are flavours such as those of dried fruits, ginger, and orange bell peppers (bell peppers seem like a really common note among huang pian shengs).

All in all, I can’t recommend the tea, especially at this price.

Heh, I too had huangpian today and pulled orange bell pepper from it.

You haven’t liked it… I did liked it. Bit weird. Maybe I had other expectations and that’s why I liked it more?

This tea is just 5 years younger than I. And as I have birthday today, I decided to make oldest tea I have in my stash. Maybe I have some forgotten tea bag somewhere in collection which is older, but bleh, I do not want to try to find it and drink it. Rather old cake. Tea cake.

I received this one from Donatzsky again, so thank you!

About 15 seconds rinse, preheated gaiwan as well the cup.
1st steep is as well 15 seconds long. I noticed whole leaves in that compressed chunk I have in gaiwan. It weights 4.5 grams, which – let´s see if enough, too much or not enough for 85 ml gaiwan.
Wet leaf aroma is bit fig, bit piney (or rather resinous). Fruity.
In taste it is mellow, but the taste is nothing distinctive. Maybe as I am drinking it rather cold?

Second steep. 30 seconds long. Pour green, clear liquor. It is more resinous in aroma as well in taste. But it is still so mellow. Bit honey.

Third steep, as well 30s.
Still mellow, still resinous and honey and mellow in taste. Some sweetness I am not able to recognize. Maybe like a candi sugar?

5th 45 seconds
It is such a strange, chunk is still compressed, leaves do not separate itself, so I helped them a bit (let’s see if it will change something in next steeps)

This steep though, is again resinous.

6th, for a minute.
It became bit like a vegetable broth.

7th 1minute15seconds
Similar to previous one. I like that it is still very smooth, even it is more vegetal and less resinous.

8th 90 seconds
Who knows? My thermos is empty now. So last one.

Okay, it is bit vegetable, but little fruitiness takes place too (again). As well the resin. And of course bit of everything is there.

And as a festival of classical music about 10 km away from my hometown called “Smetana’s Litomyšl” let me post song pairing (made by Bedřich Smetana, who was born there): https://www.youtube.com/watch?v=uI8iTETiSqU

Actually the song pairs the tea quite well.

And overall? Certainly a nice tea. First half I enjoyed more, resinous taste is pretty interesting and I liked refreshing taste of it. Okay, not really refreshing, but the lightness of it. Nothing “heavy” in taste.
Second half became vegetal, which was not a bad thing too. Heavier in taste, but still easydrinking and smooth.

Birthday wishes from me as well! Hope your day was lovely.

I loooooooove Die Moldau by Smetana! Bought an album, yes vinyl album, when I was in college. Great song for your birthday, Martin, and I pray this will be a happy day and a joyful year for you!

Thank you everybody for wishes. Unfortunately that day was bit strange. I was relooking back that year, looking for ups and downs…
It was strange day

Spring has been late to start this year. This morning the temperature clocked in at a measly 8°C, but at least the trees are in full bloom and tiny baby leaves have started popping out. The perfect scenery for a day off work with a good long tea session if you ask me.

Since this tea has been sitting around since the turn of the millennium I gave it a decent wash. Happily, a concentrated honeyed raisin and fig aroma filled the air around me without even having to get my nose close to the teapot!

The first pot produced a lovely deep orange and caramel colour liquor, although it wasn’t as pungent as the wet leaves. The taste gave me a really good idea of the flavours to come in additional brews though. The fig and raisin becomes accompanied by a slight medicinal or herbal flavour (perhaps like ginseng extract), a very subtle smokey grass note, and a lovely pop of black peppercorn or nasturtium flower/spice on the sides of the tongue. It’s also just incredibly smooth. No astringency, thick mouth-feel, and a powerful wash of Qi over the whole body. By the end of the third pot I was definitely giddy and tea drunk.

Overall this has shot to the top of my list of favourite pu-erhs. Absolutely phenomenal, I could drink this all day every day. If you have never tried this tea do yourself a favour and at the very least grab a sample. It’s a brilliant example of how rich an aged sheng can be. You can really taste the love and passion that went into this.

oh, I have been meaning to try this one, but now I am really curious :)

This is the first time I’ve ever scored a tea with 100, it’s that good! If you like sweet and spicy profiles I think it will be hard not to like :P

I got this one in just the other day. Looking forward to trying it after it settles awhile. Cake was much thinner than I was expecting. It’s like a giant disc.

Amazing, I will be buying a cake next time I order. I’m actually drinking the last of my sample as I type :) What do you think of it?