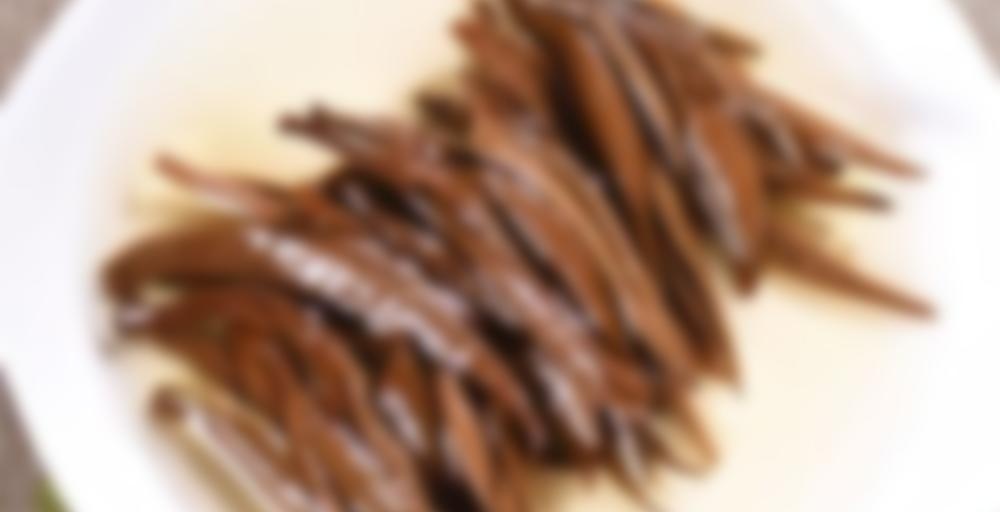 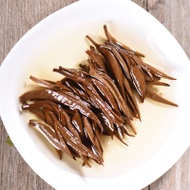 Spring 2018 harvest, picked from tea plants growing in Ning’Er county in Simao prefecture. Only the bud shoots were picked. The tea is lightly wilted and processed to keep it’s delicate taste and appearance intact. A kind of chocolate and malt taste comes from the brewed gold-orange tea soup. Aroma is thick and sweet. An enjoyable experience comes from the aroma, flavor and appearance of this lovely tea.

This was my most recent sipdown. I finished my 50g pouch of this tea last night while I was staying up and watching goofy horror films. At this point in my tea journey, I am no stranger to Yunnan golden needle black teas, so I pretty much knew what to expect with this one, but I am happy to report that it did not prove to be a carbon copy of the autumn 2016 and spring 2017 imperial golden needle offerings from Yunnan Sourcing. This tea produced a liquor that was a little thinner and sharper in the mouth and also leaned a little more heavily on fruity and spicy aroma and flavor components.

This was an interesting and endlessly fascinating Yunnan black tea with a ton of appeal on the nose and in the mouth. I liked that it had some new characteristics to offer compared to the previous two productions and also found it to be incredibly drinkable despite its depth and complexity. My only knocks were that it seemed to fade a little quicker than I thought it should have, and the liquor was slightly thin for my liking. Still, those were very minor issues. This was a great tea overall.

I believe I have a sample of the Autumn 2019 version from Eelong (correct me if I am wrong), but otherwise, I am in full agreement with the other review I see for this: golden malty madness. Absolutely delicious. First steep made me hold my mouth the way you do when you taste a teaspoon of raw cocoa powder. (What, you don’t do that? I imbibed Nestle’s Quik like that by the tablespoon when I was a kid.)

Never cocoa powder, but I have been known to sample Ovaltine by the spoon :’)

Guilty of eating packets of Swiss Miss over here.

The cocoa powder visual hurt my feelings but I can’t judge because I ate ramen noodle seasoning straight from the packet last semester.

Ooh, all that salt would burn!

For some students, that burn imparts the spark of life.

@"Youngest" – I’ve heard of people eating the raw noodles straight from the packet, but never the seasoning! That’s a new one

@Nattie – LOL. New lows, for sure! I am always surprising myself.

We’ve chased the rabbits way-y-y-y-y-y-y out of the garden here, but I have a buddy who makes a really good Asian salad that has crunched-up dry ramen in it. Tasty!

Lol, I think we might have derailed the conversation, sorry! But quite honestly that sounds good, I kind of want to try it! And @"Youngest", you inspired me to lick the empty seasoning packet from my noodles tonight! So much salt!