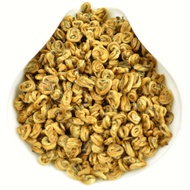 This is the purest gold bi luo chun black tea we have ever offered! Just the buds from first flush of spring harvest tea leaves growing in Feng Qing were picked and processed without the slightest inconsistency into this elegant pure gold black tea. After the tea was processed into the finished tea, the tea was hand picked through to remove any tea that was not perfectly shaped or not pure gold in color. The result is a very elegant looking tea that not only looks amazing but is very smooth to drink as well.

The brewed tea is sweet, with notes of malt and roasted sweet potato. Being from Feng Qing it also has a earthiness to it, but it’s very subtle. Mostly the tea is sweet and malty, while being thick and full bodied in the mouth. It’s also worth noting that this tea is very infusable, surprisingly so for being a pure bud pick.

This was either my last sipdown in September or my first sipdown in October. I can’t remember which is the case. I finished a bunch of teas right around that time, so my confusion is perhaps understandable. Anway, I’m normally not huge on Yunnan bi luo chun black teas for whatever reason. Even when I like the regular loose leaf/bud offerings, I often find myself less impressed by the formed versions. I’m also normally a huge fan of Feng Qing black teas, and though I am not sure whether or not there is an unrolled/unformed version of this offering, it is still almost always the one regular Feng Qing black tea offering to which I have difficulty warming up each year. That trend continued with this spring 2018 tea. It was not bad, but it also just did not excite me all that much.

Prior to the rinse, the dry tea buds emitted aromas of malt, pine, cocoa, marshmallow, and smoke. After the rinse, I detected aromas of sweet potato, honey, cream, and sugarcane. The first infusion brought out aromas of caramel, baked bread, butter, and banana. In the mouth, the tea liquor presented delicate notes of malt, cream, butter, sweet potato, cooked green beans, and cocoa that were backed by hints of cinnamon, caramel, baked bread, roasted almond, banana, and sugarcane. The majority of the subsequent infusions brought forth aromas of roasted almond, eucalyptus, orange zest, and earth. Stronger and more immediately notable impressions of roasted almond, baked bread, caramel, and sugarcane appeared in the mouth alongside notes of marshmallow, minerals, cocoa, and orange zest. I also picked up on hints of smoke, pine, honey, eucalyptus, grass, earth, and horehound. As the tea faded, the liquor served up notes of minerals, cream, cooked green beans, malt, marshmallow, and butter that were chased by lingering hints of baked bread, honey, orange zest, roasted almond, sugarcane, and sweet potato.

This was a very sensitive and subtle tea. It seemed to not react well to infusions that were conducted in rapid succession. It also seemed to hold back a lot throughout each session I conducted with it. Though the body and texture of the tea liquor were nice, the tea’s bouquet was a little more simplistic than I expected, and it was a bit too stuffy and reserved in terms of the way it expressed its flavor components. In the end, this was a pretty good tea, but it was not the sort of Yunnan black tea I typically enjoy. Out of all the regular Feng Qing offerings, this is the one that I will continue to look forward to the least each year.