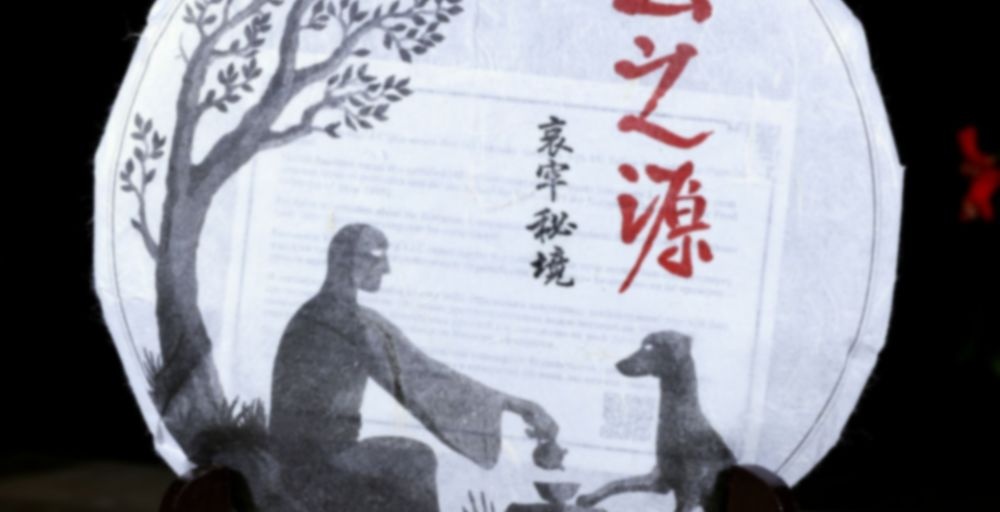 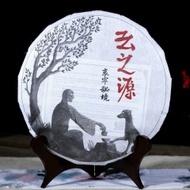 Entirely first flush of Spring 2018 material from high altitude Ai Lao mountain. The Ai Lao mountains peak out at about 3200 meters, making them second only to Wu Liang Shan as the highest mountains in Simao prefecture. The Ai Lao mountain range is in the county of Jingdong which borders Chu Xiong prefecture. This tea comes from old arbor tea trees growing in an undisclosed location (Secret Garden) in the Ai Lao mountain area at 2100 meters, making this some of the highest altitude pu-erh in existance. Due to the high altitude most of the tea trees in this area are a naturally occurring hybrid of large and small leaf (sinensis and var. assamica). The trees are healthy old trees growing naturally just below the peak of one of Ai Lao’s many mountains. Ai Lao tea gardens are arguably some of the remotest tea gardens in all of Yunnan. Lack of roads and access has kept the environment of this area in pristine condition.

The tea itself is aromatic with hints of orchid aroma (兰香), and a strong mouth-feel. The leaves are fatter and more burly than the Wu Liang tea. It features lots of hairy buds that make it somewhat resemble its close neighbor Jinggu mountain teas. Honey and grass essences are present in this thick soupy tea! Very sweet and full bodied tea that remains flavorful and complex for 10+ steeps. “Secret Garden” is the most premium Ai Lao area tea that we have ever had the privilege to enjoy (or offer for sale)!

This tea was compressed in a small tea factory near Kunming where stone presses were used. Low temperature “baking” was used to dry these cakes after the compression process thus preserving their integrity! The cakes are wrapped and then bundled into bamboo leaf “tongs” with seven cakes per tong.

I have a sentiment for ailao, since it was my first positive experience with young Sheng.
Nowdays I find the ailao taste rather un-exciting, but not necessarily in bad way, since there is some calming quality in the ailao experiance as a whole.. It’s hard to explain, but a good ailao just feels right, like it’s balanced..
So I was happy to hear about Scott releasing his “highest grade” ailao to date, especially since I’ve had a previous offering from him and it was a very pleasant.
I was even more happy to drink it since it was the best ailao I’ve had.

It was also not too expensive, which led to it selling out quite fast.
Regardless of that I’d still recommend trying it out, especially to people who want to check out the ailao taste. There is an autumn version up now, too.

To criticize this tea, it didn’t last as long as I’ve would’ve wanted.. but that’s a common problem at this price range.

This is a tea I’ve been interested to try ever since it was released. However, every time I was placing an order with Yunnan Sourcing I ended up prioritizing other teas over it and it was always one of the last things getting dropped when I was trimming my cart. Then late last year I noticed that there were only three cakes left and I was presented with a dilemma: Order a sample, knowing the tea would likely sell out before it arrived, or order a cake blind. I ended up doing the latter. Two days later the tea was sold out. I’m normally not in the habit of reviewing teas that have sold out, but there are actually still some samples left if you want to grab some of this tea. There’s also the possibility that it may be pressed again in future years if Scott has the ability to buy it and the tea is good and priced within reason. If that were to happen, people can at least use my notes as reference.

As mentioned, I didn’t think I would be reviewing this tea, but after having my first casual session with it yesterday, it left such an impression I had to jot down something. I didn’t keep any notes, so this is all going to be from memory like the first few reviews I ever did on Steepster. I used around 7g in a 100ml gaiwan. The smell of the dry leaves in the pre-heated vessel was kind of woody and somewhat alcoholic to my nose. As a non-drinker it’s tough for me to speculate which spirit I feel I was smelling, but the first word that popped into my head was cognac. The Internet tells me it is aged in oak barrels so I might not be too much off. I did my standard 5s rinse followed by a 5 min. rest while I sipped the wash. As all my leaves pried off the cake were in loose form, the rinse was very strong. I don’t recall the exact flavors.

The number and timing might be off, but the infusions went something like 5s, 5s, 7s, 10s, 15s, 20s, 30s, 45s, 75s, 2 min., 3 min., 5 min. and 7 min. Those who have seen some of my others reviews may be aware that I typically stop around the 2 or 3 min. mark for steep time even if the tea might have one or two more brews in it. This is because either the tea has ceased being interesting or I’m wary of getting a nasty final brew that ends an otherwise great session on a bad note. The Secret Garden was at around the same mark after a 7 min. infusion as most young raws after a 2 min. infusion, so the longevity was certainly great.

Early on I was getting some notes of white grapes. This quickly transformed into grapefruit or something reminiscent of that for most of the rest of the session. From the very beginning, both bitterness and tartness were present in the tea and competing for dominance. Early on the tartness was in the lead, but after the mid-steeps it slowly faded away while the bitterness began rising along with sweetness. I found both the bitterness and tartness in this tea very enjoyable and certainly one of the highlights for me. They were never persistent or abrasive.

The mouthfeel is another highlight. While currently not the most viscous tea, the texture is extremely oily, or at least that’s the best word I can come up with to describe it. The tea felt great in the mouth and this texture was something that was present practically till the end, which is not always the case with these young teas. This tea is kind of the opposite of the Xiang Chun Lin which I reviewed recently, where the tea was really thick in the mouth but uninteresting in terms of texture.

I can’t really speak for qi during the session as I was forced to take long breaks between most infusions due to factors beyond my control. I believe I may have felt some heat at one point and small things like that, but with the long breaks between infusions the effects may have been less pronounced. For the rest of the day however after the session I could feel the life energy in the tea coursing through my body and I felt pretty great.

All in all the Ai Lao was an exceptional tea, especially for the price. It is exactly the kind of tea I personally like: strong, bitter, clean. Something that’s not too sweet, has great texture and feels great in the body. While right at the beginning I was reminded a bit of Wu Liang, for most of the session the tea was actually very much like a Lao Man’e. It is not as strong and not as bitter as the most intense Lao Man’es I’ve had, nor does it have the characteristic aroma, but otherwise it’s a very close match in terms of flavor profile. Had this been served to me as a Lao Man’e, I would have most definitely not doubted that statement. Speaking of Lao Man’e, I finally picked up a bing of the Hai Lang Hao 2016 Lao Man’e which was my first love when it comes to bitter teas in the recent Yunnan Sourcing sale. Not an easy purchase to justify, but after trying various other teas from the village it still remains unmatched.

At nearly 30¢/g, this is not a budget tea, but for the quality I think the price is more than reasonable. Were it sold for double the price, I’m quite confident I’d still buy it. If you missed out on this tea or were only able to get a sample, some alternate recommendations I can give would obviously be the aforementioned Lao Man’e. I think the standard release of Bitterleaf’s The Bitter End is a good one if you don’t want something overly bitter. Something about this tea also reminded me of Slumbering Dragon by Crimson Lotus. I don’t know if it’s the very clean, pure nature of this tea or something else. I’m not sure if the Slumbering Dragon is technically purple varietal, but it certainly tastes like one. If you know you aren’t into that, then maybe that’s not the tea for you.

Hopefully Scott is able to get this tea in future years. It is a very special tea.

Awesome, thanks for writing the review, it is indeed going to be useful if it’s ever available again from a different harvest :)