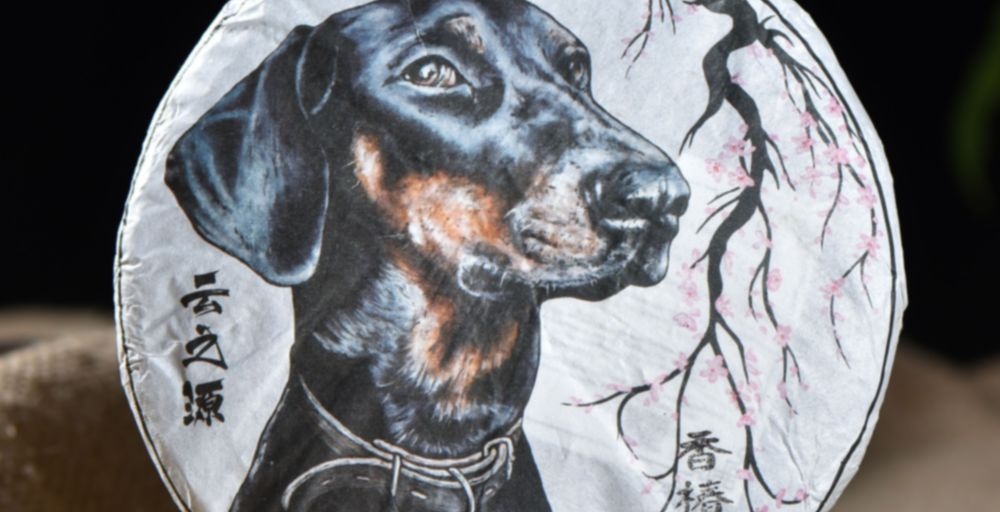 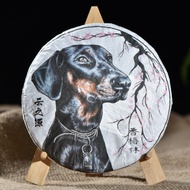 Xiang Chun Lin (香椿林) is a small village with just a few households and is just between Yi Shan Mo and Wan Gong (northeast from Yi Wu town, near the Lao border). The total of this year’s spring harvest for Xiang Chun Lin is around 80 kilograms, of which we were able to get 10 kilograms. This is a large leaf varietal tea and shares a bit more in common with Yi Shan Mo than with Wan Gong, the latter being a mixed varietal leaf (中小叶种).

Wrapper Design and Illustration by Jake Knapp of the United States

As far as I’m aware, I believe this is the most expensive tea Yunnan Sourcing has pressed to date. In typical YS fashion, my 10g sample actually contained a very generous 11.7g. I could have tried to split this into two sessions, but I didn’t feel like it. On the other hand the largest gaiwan I had on hand for this session was 140ml, so after some deliberation I closed my eyes, threw it all in and hoped to not get totally smashed by this tea. Doing the math now after the fact I realize that comes down to 1g/12ml. Oh boy.

As is typical of Yunnan Sourcing’s 10g samples, mine was mostly in loose form. To my surprise I smelled cream and mocha wafting from the warm gaiwan, not something you’d expect from a young sheng such as this. I gave the leaves my typical 5s rinse followed by a 5 min. rest while I sipped the wash. Not sure if my palate was confused, but what I tasted was akin to the smell. Some cream, hints of mocha in the aftertaste accompanied by some coffee bitterness as well. Very strange and unexpected for a young raw like this.

I proceeded to do a full dozen steeps with the Xiang Chun Lin, the timing for these being 6s, 5s, 5s, 7s, 10s, 15s, 20s, 30s, 45s, 75s, 2 min. and 3 min. The tea started off strong, light and bright. Strong in terms of strength, light in terms of the nature of its flavors if that confuses you. I was tasting some minerals and also still getting the mocha, cream and slight bitterness from before. The body was decent to start, good once the tea cooled down. The mouthfeel was somewhat oily and slick. After a couple of small cups the cha qi suddenly hit me hard out of nowhere, feeling it both in my head and chest.

The second steeping was super thick. Definitely strong, but extremely palatable. I could definitely still taste some hints of mocha, maybe even some vanilla. The bitterness had been reduced to barely a whisper now. The qi was hitting me in the chest like a hammer at this point. The immediate reaction evoked by the third infusion was that it was thick. The taste was much more acidic now, something that seems to be a trend among 2018 Yiwus I notice. I was possibly getting some hints of citrus to accompany the tartness, but I can’t be completely sure. Over time a sort of acidic sweetness built up in your mouth, making it really sweet. This was very interesting to experience as it was a totally new type of sweetness for me. I would say that the tea was somewhat oily in terms of its taste as well. The qi was pulsing in my head now. At this point the Xiang Chun Lin was reminding me of Bitterleaf’s WMD on steroids.

Steep four was thick and heavy. It had a tartness that spread across the tongue. The tea remained super palatable and there actually wasn’t too much flavor upfront, the focus of the tea shifting more toward the aftertaste now. For the next four brews the body only continued to get thicker and thicker. Steeps six and seven of these presented a thick honied taste while retaining the tartness as well. Steeps seven and eight were practically a dense, thick broth.

From the ninth steep onward the tea began to simplify and veer more toward typical green, vegetal flavors most expect to see from a young sheng. Infusion ten while also acidic and sweet also now had some real fleeting bitterness. The last two brews were pleasant, smooth and refreshing and also quite sweet as many Yiwus tend to get at this point. As the last steep started to get somewhat watery, I decided to end it there to avoid any nasty surprises.

As you’d hope from a tea this expensive, the quality of the material is very high. Despite the heavy amount of leaf, the Xiang Chun Lin remained very palatable at all times, never becoming overpowering or unpleasant. I don’t know how much of this is a product of the amount of leaf, but the tea brewed up very thick from practically start to finish, albeit the actual texture of the soup wasn’t necessarily the most rewarding.

I definitely got some qi in the early steeps, which is not something I can say for every tea. Ultimately I would have yearned some more bodily sensations to make the session more memorable, but it’s certainly a great tea as it is. Akin to some green teas, the tea did take a bit of a toll on my body, so if you are sensitive to that sort of thing and would rather avoid subjecting yourself to that when possible, this might not be the tea for you at least in its current green state.

While the early mocha notes were interesting, the tartness that mainly dominated the tea in the mid to late steeps isn’t really my favorite flavor profile at least by itself. Were it accompanied by some fruit I’d be more into it, but as of right now it doesn’t really keep me engaged. While a very good tea in terms of quality, it is not one I’ll be looking to purchase at least based on this session. Personally I prefer the Yi Shan Mo which is a tad cheaper and I now own a bing of. I would need to do a side-by-side comparison, but I think I’d probably consider this similar but superior to the aforementioned Bitterleaf WMD Mansa which I own two vintages of. While priced similarly, what I would consider WMD’s advantage in this case is its smaller 100g size which makes it a smaller monetary investment and the bings thanks to their small size are also much easier to slot into one’s pumidor even if things are cramped.

This is a tea that’s great to drink now. It is one of the rare cases where I find it hard to speculate how it would age. I would expect a tea of this quality to age gracefully in most cases, but this particular flavor profile makes it very hard to imagine in which direction it will go. I’d expect to see fruit and more sweetness as is the case with many Yiwus, but that’s about the extent of my ability to speculate.