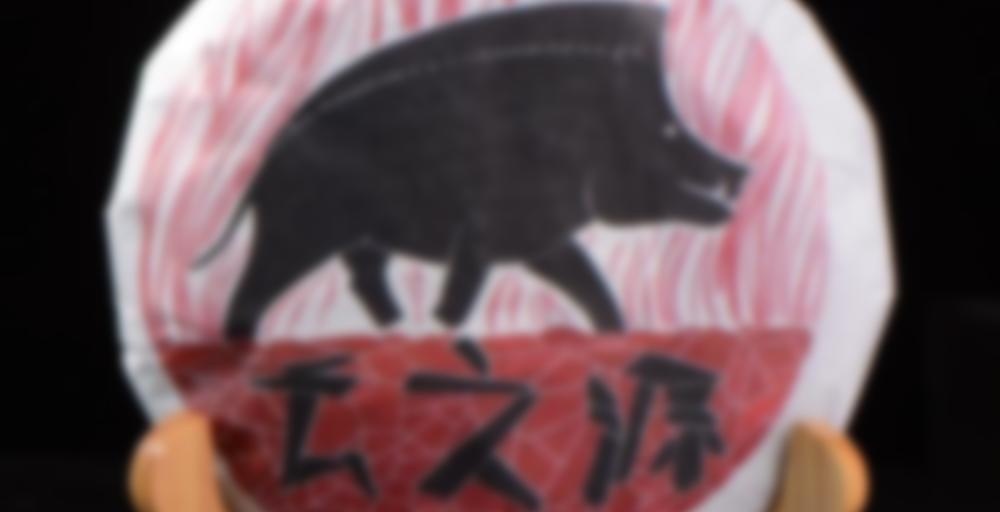 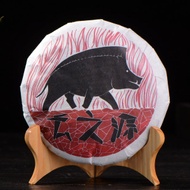 This is a premium blend that we’ve name “Ba Wang” 霸王, which means something like “Badass King”. “Ba Wang” is a sort of neo-classical pu-erh tea cake title. After all, imitation can be the highest form of flattery! Although there are many cakes called “Ba Wang”, I think you’ll agree ours is among the best!

Composed of tea from three Menghai villages, this cake is bitter, sweet, and chocolatey with warm cha qi, thick body, and a long-lasting mouthfeel. We think you’ll enjoy this tea and consider worthy of adding to your collection for aging.

This was an incredibly thick and oily tea and the overall flavour was fairly simple and stagnant throughout the session – very brothy and savory with notes of wet decaying woods, bitter herbs, and just a general “medicinal” kind of ere to it. That said, it was so warming with a strong calming body feeling. I did kind of like the mouthfeel more than the taste though. Still, I’m glad I decided to pair this shou with raspberries because the pop of sweetness in between steeps was really enjoyable and improved the experience for me.

Thank you Togo for this sample!

Those raspberries! And paired with ripe puerh!

Great complexity. Some wet pile in the first steeping, like seafood broth, in the most pleasant way. Then sweetness like blackcurrant juice. Next a cocoa bitterness. Oily but not thick. Wet leaf reminds me of stale popped corn and sawdust. Flavors let up after eight steepings while the aftertaste starts to shine, which I’d describe as a mineral fruitiness that tingles the chest.

Nice revitalizing energy. Had a terrible mental health day and I found solace in this tea.

Had one of those mornings where I couldn’t decide what to drink so I dug this out of my sample stash to give it a go.

The early steeps are good. Some pile funk on the nose and plenty in the empty cup though it doesn’t really show through in the taste. Has the chocolatey bready fruity thing going on and no camphor. Definitely a lively and complex tea in these early steeps.

In the middle steeps this tea starts to warm up and round out. It gets sweeter here as well and starts to leave a coating of sweetness in the mouth. Up to this point I am impressed with this tea and find it to by very dynamic.

Then suddenly this tea seems to fall flat on it’s face. At this point with most of the ripes I’ve been drinking lately I would expect the tea to have a couple more interesting steeps before settling in to the stewed green hardwoods flavors that most young ripes seem to have in common after steeping the fermentation off the top. The first thing to go was the mouthfeel. Then the flavor. And though the tea soup kept up a decent color there just wasn’t anything left in flavor or texture through the last several steeps.

I’ll come back to this tea as I have more of the sample left. It’s only been in my stash for about 10 days so I’ll give it another try when it has rested a while longer.

Time to test out the Badass King! Similar to the YS Hekai, I used half of my sample in my 160ml Yixing zini teapot, which ended up being 13.1g. My teacup and cha hai were also the same, both made from Jianshui clay.

The scent of the wet leaves after the rinse is quite sweet and herbaceous. The taste mirrors this in the rinse and early steeps. The tea is cooling, herbaceous, high-noted and fragrant. Definitely complex and multifaceted. The initial qi is almost immediate and quite calming.

As the infusions progress, hints of bitterness start to emerge, along with an active, perhaps even somewhat titillating feeling at the back of the tongue. At this point the qi has switched gears and I’m starting to feel quite alert. The body is quite thick, especially once the tea cools a little. I’m now getting dark cherries in the aftertaste and this is reflected in the wet leaf aroma as well, which is quite rich at this stage.

As I entered the mid steeps, the tea suddenly got incredibly sweet all of a sudden. Actually a bit too sweet for my taste. I was now getting some hints of dark wood in the finish and gradually some touches of dark chocolate started to reveal themselves in the aftertaste. This was accompanied by an appropriate growing bitterness, which thankfully counterbalanced the sweetness by eventually overtaking it. Unfortunately the nature of the bitterness wasn’t enjoyable in the same way as say in the Hekai, it just kind of was, but it was still better than nothing.

Things continued to improve, with the chocolate gaining a nice acidic quality to it. This was also joined by touches of a winey, alcoholic character. There was some rounded, slightly peppery upfront bitterness, which was replaced by a subtle sweetness in the aftertaste alongside a pleasant lubricating feeling from increased saliva production.

The mouthfeel improved with the extended infusions toward the latter half of the mid steeps, inducing slight euphoria and becoming very oily in texture. The qi returned from energizing back to calming. The taste was full, yet subtle with incredible depth. At this stage it was no longer easy to pin down any individual flavors as they had all begun to blend together to form one whole.

Once we got to the late infusions, the taste obviously simplified a lot as expected, but still retained more depth to it than your average shu. There was also still plenty of body, even requiring some effort to swallow at times. The taste was fairly typical but difficult for me to classify. I’d likely say more earthy than woody, but probably a mix of a bit of both.

I had no expectations going in, but man was this a great session. While I liked the Hekai ripe a lot, I was even more impressed by the Ba Wang. At its most complex, this was honestly probably one of the most complex teas I’ve drunk, and I’m not talking just ripes. Then again it’s a blend which would help in that. Whereas the Hekai is an exemplary single origin tea, this one is a great showcase of what a skillful blend of premium ripes can bring to the table.

Whereas I’d quite possibly say that purely in terms of taste I actually preferred the Hekai to the Ba Wang, I noted in my review for that tea that for whatever reason it didn’t have that wow factor for me, whereas this one did, to a degree. That just goes to show that taste is but a single facet of a tea and not even number one priority for me personally. The Hekai is a great tea in its own right, but Ba Wang as a whole most certainly ranks higher in my book.

As such I was certain Ba Wang would be the more expensive of the two, but no, it is slightly cheaper. That makes it all the more easier to recommend. I think it’s in a great place already, but in the same breath I will note that this is definitely a tea that I would recommend storing for at least a minimum of five years to get the most out of it. I’ve noted great changes in much lesser teas than this and would expect a blend like this to hold great potential within it. Obviously ultimately it’s up to you.

I had my first session with this tea after I picked up a cake in one of my recent orders. It turned out to be more complex and subtle than I expected. On the other hand, it really is very thick and has a strong warming cha qi, as mentioned in the description. I definitely do not regret getting a whole cake blind.

Already the dry leaf smell is quite interesting and unique with notes such as sawdust, paper, meat, mint, juniper berries, and brown sugar. Strangely enough, wet leaves aroma reminds me of nuo mi xiang – the sticky rice fragrance herb sometimes added to shou – even though there is none here. On top of that I get scents of black currant, chicha morada, bamboo, and a light yeasty aroma.

The taste starts off woody and sweet with flavours of bread, nettle and plant stems. There is also a purple corn flavour which I noticed in the aroma already and which persists throughout the whole session. Soon enough, light bitterness appears, but I wouldn’t call this a bitter shou at all. Around steep 4, I also get a light chocolate note, but again, it is not as distinctive as you can find in other ripe pu’er teas. Rather, there is a very nice sour note developing towards the end of the session, which is quite unique. It is complemented by a medicinal character of the late steeps, which together make the session interesting all the way till the end.

In the aftertaste, some new flavours like honey, cranberry, cocoa, butter, and marjoram emerge. It gets slightly acidic late on as well. The texture is very thick, oily, and smooth from start to finish. It is very easy to drink despite being full bodied! At times, there is some interesting numbing mouthfeel, which makes the liquor seem to “disappear” in my mouth. The cha qi is mostly warming at first but slowly becomes very heady and stronger than you can find in most shou. I would describe the tea’s energy as of the creeping kind.