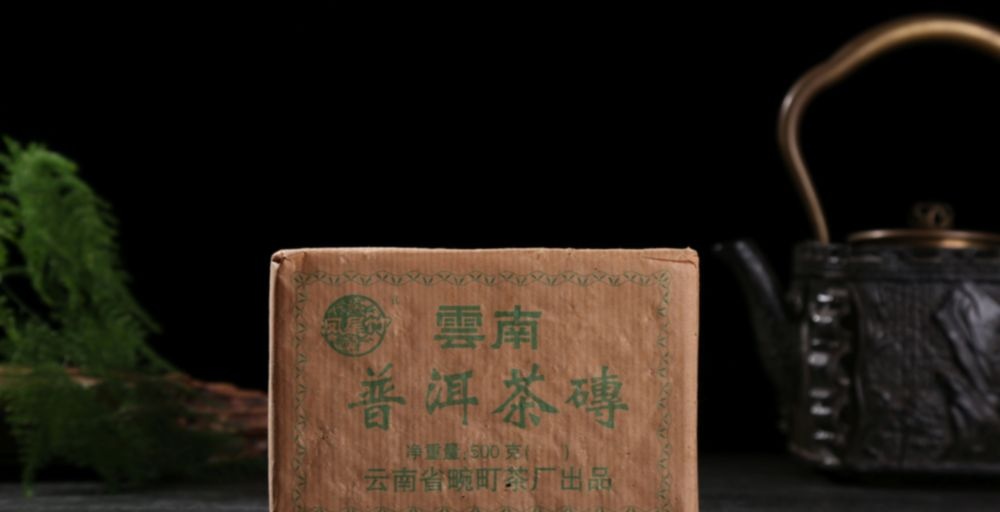 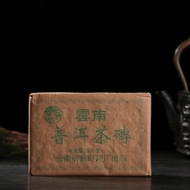 Wan Ding is a small now defunct tea factory (that was) based in Mang Shi Town in Dehong Prefecture. It was one of the earliest tea factories in Dehong to engage in wet piling, and was also known for “Golden Flowers” ripe pu-erh teas. During the wet piling “golden flowers” spores were introduced to the wet pile and then during pressing the teas were pressed ultra tight into bricks where the golden flowers were able to briefly flourish before final curing.

The result of their efforts and 20+ years of aging (10+ years in Dehong and then more recently in Kunming) has given this brick an incredibly unique taste and aroma. This is a very smooth tea with no real wet storage taste. Fruity, sweet, with a touch of smoke and malt makes this a very enjoyable experience. There is something totally unique and enjoyable that this tea has which I would attribute to the presence of golden flowers.

We recommend using a good pick to break off in thin sheets so that the water will penetrate and awaken this sleeping beauty! Be sure to use 100C water and push it when needed (in the beginning).

If you order a sample we cannot guarantee that you’ll get a chunk with a visible quantity of golden flowers. Surprisingly the taste if quite consistent regardless of whether the golden flowers are visible or not.

1996 pressing (no date stamp or markings on the wrapper)

This is the oldest tea I have poured for myself at home. That’s part of why I bought a sample. That and that it has golden flowers and is really affordable. My sample did not have any golden flowers and consisted of 2 corner pieces and an edge. Almost as if it was the first sample off a brick. Not disappointed with that.

Fresh out the gate this tea is pretty mellow and maybe even bland. Not much flavor or aroma. A tad bit of camphor. Wet leaf smell pretty mellow though with a hint of something in the maple/molasses realm. Tea soup pretty clear and brilliant and a bit towards the lighter side.

This tea got more interesting as the session went on which is unusual for a ripe in my experience. It did continue to be mellow with subdued flavors though. I found that in the middle steeps there was hints of interesting things going on under the surface. Kinda like a word on the tip of your tongue that you can’t quite bring forth. I imagine there are plenty of folks who might really enjoy that. Myself, I’m not a subtle flavor chaser and prefer my ripes especially to be potent and direct.

This tea sesshed out pretty well. Maybe not the longest legs around though held up through plenty of steeps. It seemed to get thicker and richer as the session went on and the subtle middle steeps gave way to a round stewed green hardwoods thing (although not too green).

Overall I’m pleased with this tea. Not impressed though pleased. Nothing off about it. Nice glowy body feels. It’s going on the want list though not near the top. Especially as it’s coming towards spring and I’m starting to concentrate on stocking up on sheng puer for the warmer months.

The last thing to say about this tea is I think it would benefit from a couple years in storage that is warmer and wetter than Kunming. With a tea this old that still has a hint of greenness I feel it could still develop into something more interesting. If a wetter home could bring out just a tad bit more of some camphor and spices then this tea would be way more attractive.

Taiwan storage now seems to be the sweet spot.