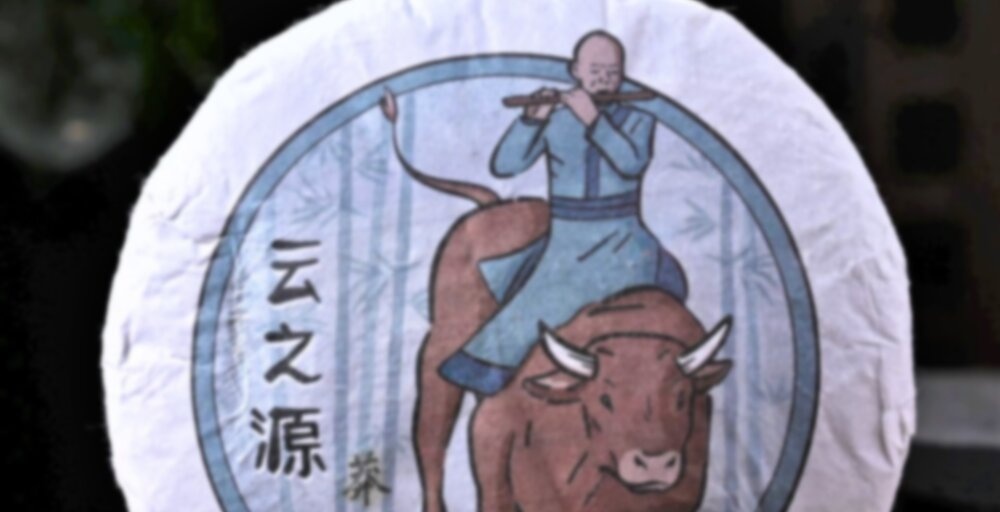 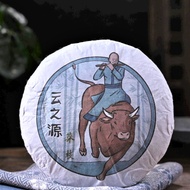 Mang Zhi is a small village of Yi and Yao people living just west and south of Yi Wu town in the vicinity of Yi Bang and Xi Kong villages. Like the teas from Yi Bang and Xi Kong the tea is a primordial mixed large and small leaf varietal. The tea leaves are not as big as Yi Wu mountain (proper) large leaf varietal but have a higher level of aroma (香气高) but not lacking in cha qi (茶气). The brewed tea is aromatic, thick and sweet but not entirely lacking in bitterness and astringency. Mang Zhi village tea leaves are dark olive green color when brewed.

Careful attention was paid to the processing of this mao cha giving it an even taste and color with little or no black flecks (if the leaves are signed during the kill-green process). The mao cha was carefully steamed and pressed with 40 kilogram stone presses in the traditional manner and each stack of 7 cakes was packed in the highest grade bamboo leaf tongs for collection and long-term storage.

In total just 15 kilograms of this tea has been produced. We have delayed sales of this cake for several weeks to allow the water vapor from pressing to dissipate. Further aging will only improve this wonderful tea!

I haven’t really kept up with Yunnan Sourcing’s new sheng offerings and I realized the most recent one I’ve had is from 2018. So I decided to order samples of most of their spring 2021 teas – the ones that sounded interesting. That ended up being eighteen teas plus one from 2020 and another from 2014. Since a couple of the Yiwu pressings seem to already be nearly sold out, I decided to start from the most expensive teas and work my way down. So far this has been the first tea interesting enough to bother reviewing at this point in the teas’ lives at least.

Thinking about it now, this might well be the first time I’ve had tea from Mang Zhi. Yunnan Sourcing has offered tea from there in a number of prior vintages, but I’ve just never happened to sample it. Nor can I recall ever running across anyone reviewing teas from there either. As such I went in pretty blind besides knowing it was from somewhere within the greater Yiwu area. The name makes my mind immediately draw parallels to Man Zhuan, but I had no idea if I should expect any sort of resemblance in the cup.

Using my standard ratio of 8g in my 120ml Yixing jiangponi gaiwan, the aroma of the wet leaves is already unique enough to pique my interest. Before even removing the lid, I could pick up a caramelized scent wafting from the small aperture I used to pour out the rinse. Then, bringing the leaves closer to my nose and breathing in deep, I got an interesting tingling sensation. The aroma had a slightly smoky and sour character to it. Taking a sip of the wash, the taste very much mirrors the aroma. I get a tingly sensation on my tongue and the taste has a whisper of smoke, sourness and an intriguing sweetness.

The Mang Zhi starts off rather light in terms of body, eventually settling on what I’d describe as around a medium or medium-light body. While the flavors themselves are generally on the gentler side, this tea has a lot of strength, easily beating all of Yunnan Sourcing’s 2021 teas I’ve sampled so far, even the ones that were in totally loose, broken form.

The early steeps have some (pleasant) sourness to them, along with a sweet, vegetal taste which is joined by bitter greens a couple steeps in. The sweetness came across to me as rather unique, starting off caramelized as mentioned, moving to a vegetal sweetness, then a more typical Yiwu sweetness, before finally settling on an interesting berry sweetness in the late steeps. Early on I got some sour breadiness, in the mid steeps some woody, piney, resinous notes reminiscent of the more foresty Mengku teas, in the early late steeps a surprising amount of bitterness with a lot of resemblance to Nanmo/Hekai/Bulang teas, and lastly in the late steeps the aforementioned interesting berry tartness and sweetness (possibly black currant, but I’m not very good at identifying berries).

All in all I really enjoyed this tea. It is rather pricey at $0.67/g, but the quality is there. The tea is strong, dynamic and unique – or unique enough. The longevity is also excellent; I was able to get ten good steeps out of this one without the leaves really losing steam at any point. The eleventh brew I left for 10–15 min, coming back to an extremely strong bitter fest.

For an Yiwu there’s a surprising amount of bitterness in this tea, but it is often a very fast bitterness which transforms almost instantly. Over time it does grow more persistent, but I at least personally rather enjoyed it for most of the session. It’s not quite a kuwei that I love but I do like it a lot. There is also a lot of sweetness in this tea to counterbalance it.

The aftertaste is very strong. Some infusions I could taste for a long time after swallowing, the taste being just as strong as when I’d had the tea sitting on my tongue. The empty cup smell is also very strong for such a young tea. I highly recommend paying attention to it.

For experienced sheng drinkers I would highly recommend a sample. Less experienced drinkers and those who’d consider themselves not great at picking up the small nuances of sheng pu’er on the other hand might find themselves better off spending their money on other teas. Interestingly this tea – at least for me – displayed characteristics of Yiwu, Bulang and Mengku. As such, there are actually a lot of teas that I could recommend that are quite similar and offer much better value, but most of them don’t offer the same level of quality as the Mang Zhi. Bitterleaf’s “Drink Me” from Nanmo for example offers almost unbeatable value at just $0.135/g. That one while sharing similarities with the neighboring Hekai has also started reminding me a lot of foresty Mengku teas as it’s been aging. It does get pretty rough in its late steeps, but up till then it punches way above its weight.

If you don’t like bitterness, then this is probably not the Yiwu for you. If you’re more of a Bulang drinker, like me, then this might very well be your jam. I for one am certainly considering a cake, despite the price. Obviously I will have to make my way through the rest of the YS ’21 samples first and revisit this one, but based on first impressions we might have something here.