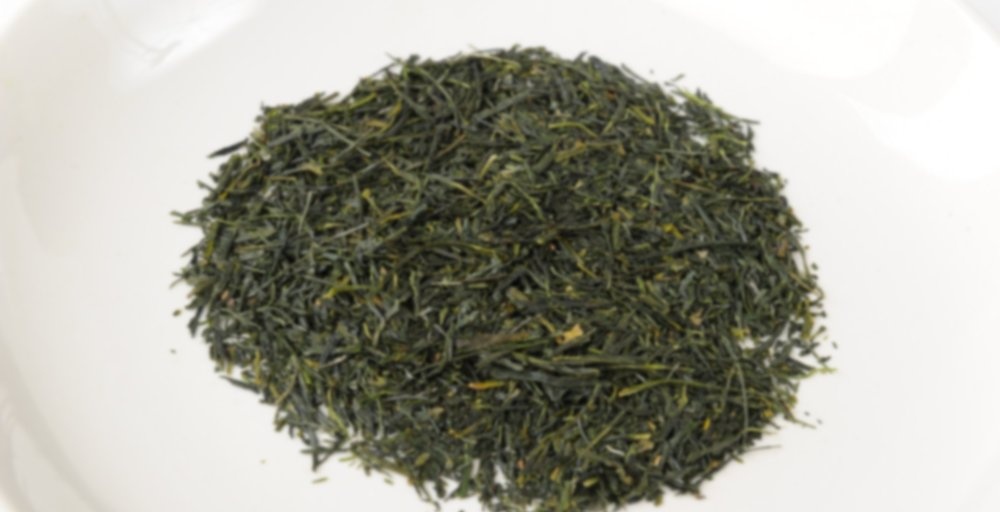 Use warm water: 50˚C/140˚F, with just enough water to cover the leaves used (5g of leaves or 1 teaspoon, about 120 ml of water). Steep for 2 minutes or until the leaves have soaked up the water. Pour a little at a time into tasting cups, alternating between cups to even out the flavor (thicker flavor will sit at the bottom of your pot)

3rd steeping: Increase time to 30-45 seconds or to desired strength.

I’m generally not a big fan of Japanese green teas, but there was a large bag of this one in the box so I decided to give it a shot. The leaves brewed up to the brightest lime green tea I’ve ever seen! The flavor was unique: quite savory and a bit salty, reminding me of seaweed or perhaps a seafood broth. Not something I’d personally care to drink again, but it was a unique experience and I’m glad to have “discovered” it in this box!

Kabusecha is sort of a tea processed somewhere between a high-grade sencha and gyokuro, but isn’t really seen very much over here. I figured it was enough of an oddity to include even though I knew it is an odd flavor, to be certain. And yes, those very deep green colors and marine notes are normal! They are quite high in theamine and amino acids. I can never drink the deeply green sencha, kabusecha, or gyokuro in high quantities, I always have just a little amount, like a shot glass worth, at a time, because that umami sea sort of flavor is so rich and not my favorite profile, but I get such an energy boost from it. I guess I equate it to those little shots of wheatgrass juice, hahaha. Not particularly pleasant to sip on, but good for you, and not so unbareable that I can at least drink a very small amount at once.

It was definitely a unique experience, so thanks for giving me the chance to try it!

Japanese Green teas are a favorite of mine! I don’t believe I’ve tried Kabusecha before though. Will have to keep an eye out for it.

I prepared this as closely as possible to the guidelines given by Yunomi. Don’t have any Japanese teaware and I had a bad experience with some Japanese green tea last week, so I used 2.5g of leaf in a 60mL porcelain gaiwan for small steepings. I didn’t have a thermometer handy and the lowest temp setting on my kettle is 160F. The guildelines call for 140F, so I just let the hot water sit for a few minutes. Didn’t follow the guidelines for subsequent steeps which called for an increase in water temperature and volume.

First steep produced a very thick kind of slimy brew similar to the salted sakura leaf green tea I had last week. It was a little salty, mostly green umami with some grassiness behind that. It made my stomach turn a little, but not nearly as bad as the sakura tea. It reminded me of pickleweed, which is a plant I’m intimately familiar with that grows on the upland edges of the salt marshes in the San Francisco Bay. Pickleweed is known also known as sea bean and sold in higher end markets around here. Eaten as a vegetable by those who enjoy its taste.

Second steep was lighter, still kind of salty, less umami, more grass. Third steep was still lighter. I think I enjoyed the second and third steeps the most. I dug around the very pretty spent leaf in the gaiwan and noticed the leaves felt very slick. I wonder if this is a quality of Japanese greens.

So far, it seems that Japanese green teas that aren’t roasted or genmaicha don’t sit well in my stomach. This tea seems high quality given my limited knowledge, but something that seems to be an acquired taste for my palate. I’ll finish the rest of the sample but I won’t seek out more. Thanks again Mastress Alita :)

This is a tea that is somewhere between sencha and gyokuro as far as production, as I recall, but after having tried gyokuro recently, it tasted very similar to me, so having a very umami, sea-like, salty/vegetative/seaweed taste and being quite thick are all pretty common for gyokuro. Steeps deeply green and is incredibly heavy in theanines and aminos. I’m not wild about them, but I don’t hate them either. I have to drink it in little tiny amounts, too, in that 50-75ml range. The l-theanine in the stuff is so high that for me it’s like drinking a shot of seaweed juice to get a mega boost of energy, heh. Apparently the Japanese eat their gyokuro leaves when they are done, but I’m not that adventurous… I do remember this one tasting more sencha-like on the resteeps, as memory serves!

My kettle only goes as low as 160F too, so I actually use a Japanese tea preparation trick to lower the temperature of my water (I don’t own a thermometer). The fancy Japanese teasets have a piece known as a “water catcher” that’s purpose is really just moving water back and forth between it and the cups, because every time the water is transferred, the energy makes it lose some temperature. I just boil at 160 and then pour the water between a couple of coffee mugs several times, until I can tell it has dropped temperature considerably (usually passing the water between the two vessels 3-5 times). Then I steep with it and by then I figure it’s probably around the right temperature; actually pretty tepid by then!

Thanks for the info. It’s appreciated since I don’t really have time to research tea at the moment. School’s getting real, quickly.

The leaves are totally edible and are like a cross between delicate spinach and a chewy seaweed.

Huh. I love spinach, but dislike (most) types of seaweed (I can’t stand nori, but am fine with the kind used in miso soup…) I suppose then I should at least give the leaves a try sometime!

Green March! I recently put in a big order with Yunomi, and I was just shy of qualifying for free shipping and didn’t know what I wanted, so what better way than to drop some mystery tea onto the order? What I ended up getting was a May 2017 harvest of Kabusecha Saeakari from Marushige Shimizu Tea Farm. I’ve never tried (and I’ll admit, even heard of) Kabusecha before. From the description it seems to be a bit of a fusion between sencha and gyokuro, but the preparation instructions are definitely more like that of gyokuro. And I’ve never tried gyokuro before, so I was expecting a little wobbliness in preparation making this for the first time.

I was mainly concerned getting the right temperature. I don’t own a food themometer, and the lowest setting on my temperature-control kettle is 160 degrees F. The recommended steeping temperature for this tea was 122-140 degrees F. And while I do own a small porcelain Japanese teapot, I don’t have a fancy gyokuro-style set with the water-holder dishes and whatnot. So, I winged it. I used the lowest setting on my kettle, poured that into my teacup, let it sit while I measured out 4 grams of leaf to put in the teapot, then moved the water to another teacup just before dumping it into the teapot, hoping by that point it would be in the proper temperature zone. While I’ll never know for certain, after my cup steeped for the recommended two minutes, the resulting steep certainly didn’t feel more than just a little above tepid to my tongue, so hopefully it was in the ballpark?

The first thing that struck me was how much of a salty aroma the tea had! The flavor was very strong; I didn’t find it unpleasant, but was not used to such a strong savory taste from my tea having never had it before, and I had to sip through the infusion very slowly. It did have a thick umami profile, with salty notes and vegetal seaweed flavors that reminded me of a seafood taste similar to shrimp. There was also a bit of grassiness and a sweet finish that comes with nice green tea. I didn’t get any astringency from the cup at all; it was very thick and smooth.

The second steep brought on more of a sencha flavor, with a more prominent grassy taste, but notable deeper, umami seaweed notes in the finish of the sip. By the third steep, the umami notes had waned from the cup, but it still had a pleasant vegetal flavor and made for a relaxing cup of green tea.

The first steep was certainly the most unique, but I think it’s going to take a bit of adapting to get my palate used to those strong umami notes. (I’ll get there; once upon a time, I used to not be able to drink bergomot, and now I have more earl grey blends in my cupboard than I care to count). So at the moment that second steep was my favorite, which brought out more of a blend of the new flavors and old, familar notes. I’ll have to continue to work with this tea… apparently the flavor can change a lot depending on temperature and steep times, and I’m especially curious to try it iced!