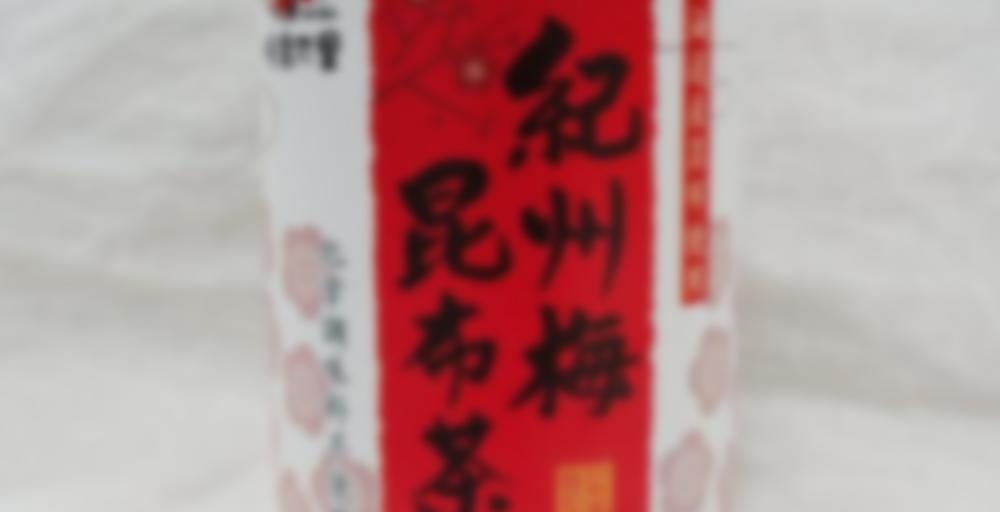 This delicious, salty herbal tea is perfect with meals. Flavoring with Japanese plum, or ume (oo-meh) is a traditional combination in Japan.

Kishū is the old name for the area that is now Wakayama Prefecture south of Kyoto. Ume, or Japanese plum, that originates from this region is well known in Japan for its delicious flavor.

The konbu kelp seaweed originates from Hokkaido, the northernmost island of Japan, famous for its seafood industry.

No MSG has been added to this product.

Instructions: To make kombucha tea, use the plastic spoon included in the can and add one spoonful (about 2 grams) to 100 cc (3.4 oz) of hot water. Wait 30 – 60 seconds and stir well before drinking.

Technically, this isn’t the tea I currently have in my cupboard, though what I have is very similar — my friend Todd brought me back a small jar of powdered ume kobucha (plum kelp) tea from his trip to Japan, and since the jar is fully in Japanese, other than reading the “ume kobucha” on the front, I have no idea the brand name. I used the directions for preparing the tea from this Sennenya brand listed on Yunomi’s site, my current go-to for Japanese teas, and from the few ingredients I could read with my limited Japanese skills, what I have and this one seem to be the same sort of thing. I am guessing the brands are probably pretty close and with the same sort of ingredients, anyway.

Todd knows that I have been looking for good teas to use as broth bases for ramen noodles, because my chronic migraine condition means I can’t use the packaged flavor packets (MSG is one of my triggers). I actually grabbed a shiitake tea from Yunomi for this purpose, and was pretty surprised by this plum kelp tea that Todd found, which apparently is another of the “brothy” variety of teas. I wasn’t so sure about the taste from the description, but I’ll try anything!

I definitely wouldn’t just drink this as a tea — it’s far too savory and salty for that! — but this is actually a really tasty broth! Despite being a thin broth the tea has a very thick mouthfeel because it is very salty. There is a vegetal, seaweed-like note to the tea, but it isn’t overwhelming — it is actually more subtle than the umami seaweed flavor I find in many green teas — and it is quickly chased by a slightly fruity sweet-tart plum note. The sip closes on a salty, soupy broth flavor. This was perfect for ramen noodles, and gave them the salt and flavor they’ve been missing, and I really enjoyed sipping up all the broth afterwards! The little flecks of dried kelp and ume were even a fine garnish on the noodles.

If you are looking for a good “soup” tea, I’d highly recommend this! Just make a cuppa of something else to actually quench your thirst.