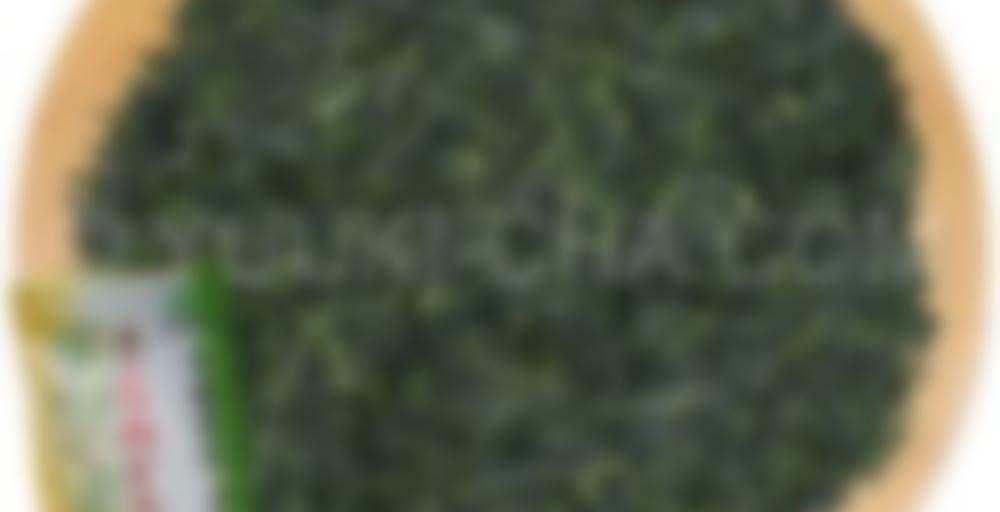 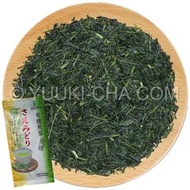 Organic Kagoshima Sencha Saemidori is a deep steamed organic fukamushi sencha comprised of the precious young leaves that appear in spring. The saemidori tea bushes used for this sencha are specially cared for and given priory by its cultivator. They are harvested only once a year and harvesting only takes place at the optimum timing in spring. In addition, a plantation area with the most suitable fertile soil, correct altitude and safest growing environment were carefully selected. Soil is managed throughout each harvest year with only natural fertilizer and with the utmost of care. As a result of all of these factors, the quality of this organic fukamushi sencha is maintained to a high standard.

The flavor is sweet and smooth with very little astringency, and it’s accompanied by a wonderful fresh aroma and beautiful green tea liquor. It’s an organic Kagoshima deep steamed sencha of exceptional quality!

Tonight is special for two reasons: I’m using the last of this tea, and I’m drinking it in my brand new hand-made ceramic tumbler! It’s one of two, and they just came in the mail yesterday, but I was busing and couldn’t try them out yesterday. Big shout-out to Mamif!

Back to the tea, I prepared the first infusion with barely steaming water, and steeped for 75 seconds. the taste is just as exquisite as usual, like some sort of sweet vegetables. The aroma might be grass, but I just mowed the lawn earlier, and I might still be smelling that. I’m really going to miss this tea after tonight…

Second infusion same temperature, 15 second infusion. It even sweeter, and had gotten a bit more grassy instead of vegetative. this is pretty much the peak for this tea: The second infusion is the prefect balance of flavors, and it just gets weaker from this point.

Third infusion, same temperature, 45 seconds. This time it tastes more grassy than sweet, but it’s not in any way astringent. Unfortunately, I ran out of time, and I’m going to need to stop drinking tea if I want to fall asleep at a decent hour. Sad, since I could probably get another cup of tea or two out of these leaves, but sleep is more important.

It’s Shincha season! I decided to order a Fukamushi and an Asamushi (light steamed) sencha this year. For the fukamushi I decided to go with this tea from Yuuki-cha (therefore this note is for the 2012 new harvest) and for the asamushi I went with Den’s Hashiri shincha (which just arrived today!).

>Dry Leaf Appearance/Aroma
As a Fukamushi sencha, the leaves are mostly broken down into a mix of dust, small pieces, and extra fine needles. The color is bright vivid green with a super sweet fresh grassy aroma. The aroma is so delightful, that I sometimes just open the tin I have it stored in, just to smell the dry leaf.

>Taste/Aroma
My first cup had a fresh mellow sweet aroma. The taste was wonderful, very tasty and super fresh. I can only describe it as a refreshingly grassy sweet buttery cup. It has a very light astringent finish, but with a very enjoyable and refreshing lingering sweetness in the mouth.

My third cup had no aroma, lighter in taste, but still very enjoyable. The astringent finish became more prominent in this cup but still not very bothersome.

>Wet Leaf Appearance
Nothing special (as most of the leaf is already broken anyways) other than the leaf had a very vivid green color after 3 infusions.

>Overall
I enjoyed this tea a lot! I’m usually not always in the mood for the thicker, fuller bodied fukamushis, but this one is so tasty! I have been drinking it non-stop since it arrived on Monday. The leaf, the brew, everything about it is super fresh, sweet, and deliciously buttery, yum!

Awesome! I’m holding off to try the one from Den’s as it comes in a non-resealable bag. I ordered a few Japanese tins that should arrive on Monday though :)

I just got mine today and I decided to get the gift tin, which is ridiculous because I got 2 oz. of tea and the tin could easily hold 8 oz. of something! Oh well!

Well that’s good to know. At least you can reuse it for other teas once you run out of it right :P?

Yummyyy I love fukamushi, I’m sure I’m gonna love this one :)

If you ordered the Japanese tins from Den’s I can definitely recommend them. While they only fit up to 50g (which can be annoying at times because you have to be careful when getting tea out so as not to spill, since the sides aren’t very high), that is also the benefit, because you can split a 100g teabag into two tins, and thus keep it much fresher (you only have to open the one tin that you are using). I ordered Hashiri, Kunpu, and Houryoku, too… but all from Japan, since they come in bigger sizes!

The tins I ordered are actually from O-cha. I ordered one before and fell in love with it, so my natural reaction was to order more :P They hold about 100 grams each. Did you order from Den’s parent company in Japan? or was it another vendor that offers those three teas?

I ordered from the parent co. in Japan… it’s trickier since you can’t order online :
https://www.shirakata.co.jp/index.php?main_page=shippinginfo#2

Use google translate on that page… but basically you enter all the info you need and your order (not your payment details) at the email address there at the top… then after they confirm, you can fax your payment details to them, OR, if you’ve bought from Den’s Tea, they might be able to use the same info they already have on file.

Awesome! thanks for the info. As you said, I’m interested in the bigger sizes since I tend to go through my Japanese greens rather quickly. Anyways thanks again for the info.

You’re welcome. It’s also cheaper too, even taking higher shipping and the bad exchange rate factor into consideration…you just have to order enough to offset it. Shipping is EMS only: http://www.post.japanpost.jp/int/charge/list/ems2_en.html

Bought this as a shincha this past spring. Being a deep steamed sencha, it needs hotter water to fully express itself. I steeped this for 1m at 175 F followed by a flash 15 second steep with boiling water. The taste is buttery smooth and sweet. The grassy, vegetal, and umami notes are in harmonious balance. Nothing aggressive or overwhelming about this tea. Personally I prefer my senchas to have a tad more grassiness to them but this is still a very pleasant and satisfying cup.

For review, brewed around 150F for a little under two minutes for the first steep. Pours a medium cloudy green, plenty of sediment from my pot with a clay filter (recommend using a mesh filter for this one). The smell is sweet, comforting, and slightly brothy. The texture is thick, almost creamy. The taste has that sweet-savory balance of cooked shiitake, but with a more green/grassy flavor. There’s a touch of bright, tangy sourness on the palate and a light astringency on the tongue. The overall effect is quite comforting. The second steep is thinner and slightly more bitter.