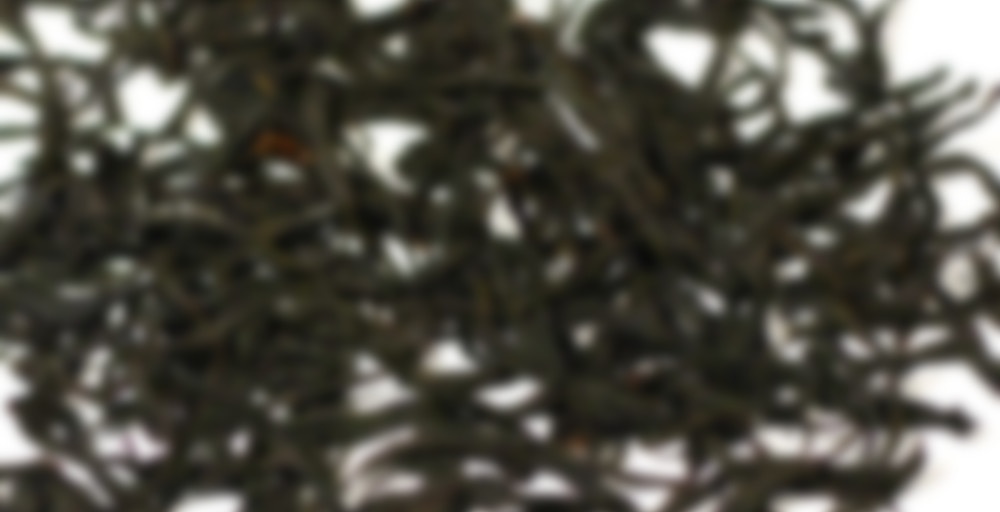 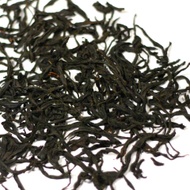 This long lush twisted leaves make very deep and mellow with a natural cinnamonic fragrance and a rich, malty flavour. This enchanting fragrance and flavour is from mountainous Nantou county of Taiwan. Ruby Black is produced from a hybrid of native Myanmar and imported Assam trees planted by Japanese growers in the 1920’s. The TTES (Taiwan Tea Experimental Station) spent over 50 years to accomplish the breeding program and release this cultivar in 2003. Ruby black tea is also alled “TTES no.18”.
Black tea experts praise “Ruby” for its unique "Taiwan fragrance". It belongs to an extremely special tea cultivar even in the multitudinous world well-known black teas. Its special fragrance let the taste person being unable to forget its aroma and flavor for a very long time.

I think this swap sample came from Arby. It’s in the tiniest ever little kraft paper zip-top bag. I was chortling to myself trying to imagine how she managed to get the tea in there while I was steeping it… XD

This is an interesting one, and not at all what comes to mind when I think of Taiwanese black teas. It seems closer to an Indian Assam to me, with the main notes I’m picking up on being malt and raisin. Luckily, it lacks the strong astringency of a typical Indian Assam, though there is perhaps a hint. It’s a rather smooth and somewhat light tea, and I can taste a bit of grain and slightly musty hay.

I enjoyed the small cup, though it was not at all what I expected. Typically with a Taiwanese black tea, I find strong honey and usually cinnamon notes, which I didn’t get here at all. Still very pleasant though!

Sadly, I’m coming to the end of this bag. I didn’t love it quite as much as the other black tea I tried from Zen, but it’s still very nice: long, unbroken twisted black leaves that brew up smooth and malty and rich. Perfect for this grey, rainy Wisconsin morning!

In the pot, the dry leaf smells like liquorice and grape candy. The first steep has notes of scuppernong grapes, liquorice, menthol, and malt, with a big kick of tannins in the aftertaste. The second steep is similar—fruity and sweet until the astringency punches you in the throat at the end of the sip.

I brought the third steep down to 190F, which made the liquorice/sassafras note sweeter and cut down on the astringency. I get faint notes of honey, raisins, and earth. The profile stays consistent through the next few steeps, then starts to fade in the ninth.

If brewed at a slightly lower temperature than I normally make my black teas, this is a nice daily drinker. I also remember it being very reasonably priced, so that helps. Let’s hope that Zen Tea keeps it in its lineup when it starts selling teas again.

I’ve had a request to start writing tasting notes again. This confuses me, I stopped writing notes because I felt I didn’t have anything interesting to say. There are lots of people here who are more articulate and have a better palate than I do. But as requested, here goes…

I normally choose and prefer China black teas, but it’s always nice to break it up with something different. This one is light with the high notes I would expect from a Taiwan black. It’s really fruity – normally I would think grape/wine fruity in this style but these are stone fruit notes. There is also some tannin (?) and a little suck the moisture out of your mouth thing. There is also a little smokiness as it cools. I don’t feel this style will every be my favorite but this was fun to try and I think it’s different enough from a typical Taiwan black to make it interesting.
Thanks Evol for sharing.

Agreed write away! My ramblings are much more difficult to get through.

Aw, I missed your notes. Welcome back! :D

You’ve definitely been missed! Welcome back!

Major thanks to mtchyg for this sample! He’s classing me up with these straight teas and I am always sending him bizarre picks. “This one has molten cherry and glitter-lava and the giggles of a monkey mixed with a green base.”

This tea was the first I tried, and I’m onto the third cup before actually getting around to tapping out a review. The first cup was far and away my best cup. I was sipping it while making brunch for house guests and I kept going “(sip) this is niiiiiiiiiiiiiiiiiice (sip) (cook).” I think I oversteeped and understeeped 2 and 3 respectively, but here’s what I’ve found to be the case!

This is a semi-sweet, earthy, honey-nectar flavor. The dirt that bees carry into their mudrooms after a long day swirling among flowers.

The nectar sweetness is gentle, in the background, unaggressive. But it’s still there. There’s also a little bit of a tang, like the striking of a bell, that’s maybe a little bit raisin-y. A thing that I totally like.

I would be remiss, before pulling out of this quick post, without making note of one last thing: the leaves. They are SO LONG. OH MY GOSH. So much DRAMA. They’re the tea equivalent of the Penguin’s long cigarette lighter and umbrella collection.

This is a nice daily tea. Nothing too noticeable that stands out. It is very smooth and drinkable. If you are at all familiar with Taiwanese black tea, you’ll know what I’m talking about when I say that it is evident in the flavor profile that it is in fact a Taiwanese black.

The main flavor in this style of tea that tends to stick out at me is almost a greener umami flavor. More than you’d expect in a black tea. And while this tea has those flavors, they are subdued. Which is fine by me.

Overall, glad I bought some tea from Zen during their sale.

Sipdown for this too. It took me awhile to notice the instructions on the bag that said steep this at 180 for God’s sake, so I made several cups with boiling water. And it was good that way, but 180 was DEFINITELY better. Smoother, mellower, and more balanced. This was a good tea, but not exactly a must have. Nice but not distinctive. If Zen Tea ever starts actually selling tea again, I might grab a bag, but I am not mourning over it like I am mourning their Coconut Oolong, because how could they just stab us in the heart like that? The world NEEDS their Coconut Oolong.

This is a black tea, but is extremely smooth. Lots of tannins, but I steeped about 2.5 minutes in 350 mL 95*C water and it was perfect. No hint of bitterness or being overly tannic as stronger black teas can be. Not that I would describe this as a strong tea, more of a medium intensity. Very classic black tea flavor, fully oxidized and full of flavor.

I can taste notes of malt, but not specifically milk or grain. It reminds me a lot of assam. No smoke or minerals. After tasting some of the oolongs from Zen Tea, I expected as much, but was pleasantly surprised. I can’t get over how smooth this tea is, it is incredible. I almost get a creamy and thick mouth feel, but without the

This tea is so mmm, yeah, I can’t even tell you. It’s in the direction of honey black, but stops just before reaching the outer edge of sweetness, and with so much more depth and layering to it. So smooth with the ever so slight bit of smoke.

The cinnamon that others have mentioned eludes me. This does not trouble me.

Yes, yes, it is. Perhaps to clarify, I meant the honey blacks that I’ve had recently, which have been supersweet. Cryptic, why yes it is. And then, if we put this post in the context me having had a couple of glasses of maaaaaaaple tea directly before it, then well never mind then.

oooh I ordered this last week. Now I’m super excited to try it! It sounds amazing.

It is one of my favourites.

The dry leaf of this is long, spindly, and a dark matte brown. The leaves are relatively straight, rather than being all twisted and curled up, and there isn’t much evidence of silver, white, or gold leaf tips. Dry, they smelled kind of fruity and woody, like prunes or bark.

I brewed this tea twice, and in so doing used up the entire sample. First, I did a traditional western steep with a giant mug — 2.8 grams of leaf in 2 cups of 95°C water for 2-3 minutes. After steeping, I had a sip that tasted of rose and citrus, like a Ceylon tea. However, it was much too hot to drink so I let it sit for a bit; while the fresh tea was a warm amber colour, it darkened considerably once it cooled. The cooler tea also tasted quite different, because the flavour turned from citrus to something more resinous, like camphor or pine.

The remainder of the leaf was brewed up gong-fu style in a gaiwan. I used 5.3 grams of leaf in 95°C water, started with a 20-second steep, and increased each subsequent steep by 5 seconds, ultimately getting about 6-7 steeps before letting things rest. Each steep of tea produced a cup of beautiful amber-coloured liquid.

And here is where words fail me, because this tea was so good. Every single steep I had smelled like cinnamon. And not just your bog-standard chai cinnamon sort of smell. No, this stuff smelled like whole cinnamon sticks, like cinnamon and sugar. Sweet, spicy, tingly, vibrant.

The taste was quite different, though, and that camphor/resin note I experienced when steeping it western style showed up again here. It felt very herbal and healing, like I was drinking some sort of tincture meant to restore my health. I could feel the dry woodiness of it all the way into my sinuses and nasal cavity.

As the steeps continued, the cinnamon note of the aroma started to give way to something fruitier, like plums or prunes. For one magical steep (steep 5? steep 6?), the cinnamon and fruit notes were balanced perfectly so it smelled like apple cider! If I could have every cup of tea smell like that, it would be a happy world indeed.

After 7 or so steeps, I called it a night, and gave the gaiwan a last loving inhale: the aroma of the spent leaves was plummy, malty, and rich. The leaves were also easy on the eyes, too, a beautiful rich brown:

Assuming the day ever comes where I manage to get my tea collection under control, I would seriously consider giving Zen Tea’s Taiwan Ruby Black Tea a permanent spot on the shelf.