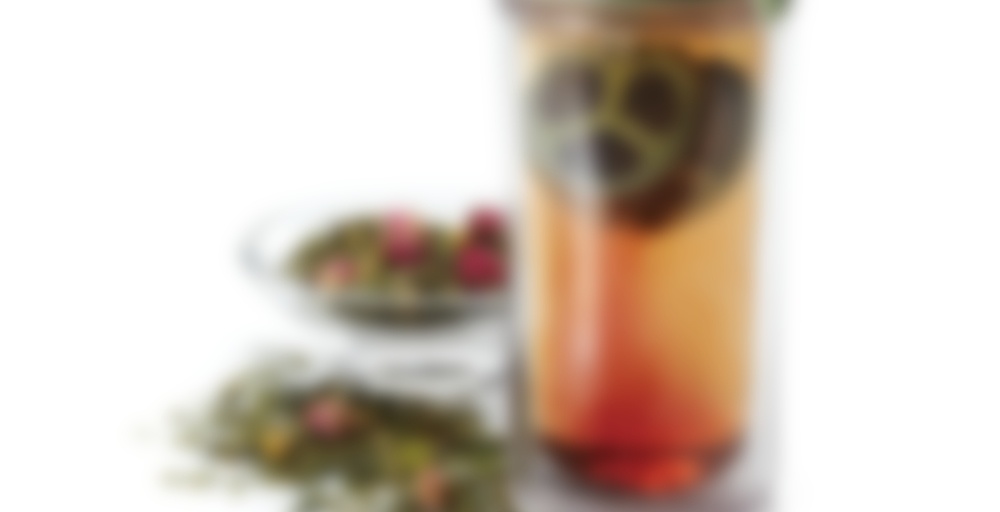 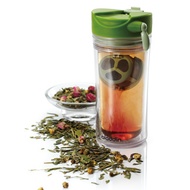 Tea time is me time.
Don’t think you have time for tea? Well, now you do. Just infuse and enjoy with this classy all-in-one solution. Add loose tea to the basket, fill your infuser with hot water, lower the basket, steep to your preferred shade and then lift the basket. It’s like a trip to the spa. Only not as expensive. And you don’t need an appointment.

The People's Mug with Infuser

I adore this! I got this at the Adagio store on State street in Chicago. I was a tad worried because I found it hard to open. But while making tea, I found it not too hard to open. I got it in a blue color, which I adore.

Pros:
This is so convenient for me! I love that I am able to stop steeping tea by just pulling up the lever. The lever is very secure and holds the basket in place. This keeps the tea hot for a long time (and thanks to the double layer, the cup is very easy to hold, just hot enough to keep my sensitive hands warm). I steeped my tea in here then drove 20 minutes, ate lunch while this was in my car in the cold Chicago weather (about 1 degree outside), and came back to a pleasantly warm cup of Earl Grey. the mouthpiece it super tight so I don’t see it leaking easily. Plus, It is so pretty to watch the tea steep in this. I steeped a herbal tea in here and the red swirls were so nice to look at!

Overall, I love this and this is most likely the only tea travel mug that I will be using. Such a good idea and works really well. Not many cons to this, and the cons are not even that big of a deal!

I have one of these in green and I love it. The basket is small but it works well enough.

That’s interesting, I saw it at Teavana the other day, and the employees there told me not to get it!

really? Thats weird. This thing rocks. It keeps my drink hot for so long! (sometimes thats a bad thing because I cant drink stuff that is too hot and it takes 20 minutes with the mouthpiece open to be able to get it cool enough for me haha). Only 20 bucks too, so it is pretty inexpensive considering the quality :)

I have had my Aladdin tea infuser mug for at least four years and I still love it. It is a double walled plastic thermos mug with and internal fine mesh basket in the lid that sits above the water line until you lower it. You fill the basket with your tea, fill the thermos to the fill line with hot water and when you are ready to lower the basket in the water or raise it, you use the lever on the outside of the lid to move the basket. You never have to open the mug to steep your tea. I read that it is microwave safe, but I have never put mine in the microwave. The lever mechanism has metal, so it would I’d microwave only the mug part.

I first bought one for my sister as a gift and a few months later purchased my own. When comparing notes with her, she complained that the infuser basket on hers would always fall down into the water. Mine clicks when put up and stays in place. I called the company to inquire about the difference and they offered to send a replacement! The new one was just like mine with a clicking sound when the basket is raised. I have read other reviews complaining about the falling basket and I’m guessing Aladdin was paying attention to it and fixed the issue in later models.

My experience with this mug has been fantastic. I do try to keep it upright and and not just toss it in a bag and I haven’t had any leaks. The inside of the mug has etched a little over years of use and slightly discolored, but it doesn’t seem to hold onto smell much. Pouring boiling water and baking soda resolves both those issues. The basket mesh is fine enough that I haven’t had any issues of smaller particles finding their way into my tea. My only complaint is that the basket is small for teas that need lots of room for expansion, but it would make the whole mug bulkier so it’s a trade off I can live with. With the double walled design, the mug keeps tea warm for a while. I find it irritating when I want to drink my tea sooner than later, but it’s better than the opposite problem and my tea is still warm if I forget it for a while.

Overall I’m quite satisfied with this mug and I would happily buy it again if it eventually gave out.

Love this thing, wish the inside was glass but other than that it’s pretty damn perfect! Had one that was flawed, teh basket popped open every time you’d flip it up, but this would be my fourth and that was the only one that is flawed. I keep buying them as gifts!

I am not sure if I should change my rating for this or not. On the one hand, it broke…not sure why or how but the seal between the two layers broke and I ended up with a tea infuser with no outer wall, and a large plastic mug. Both not so good for hot tea because it no longer keeps my fingers from getting burned.

When this was a functioning travel mug it was great (except for the leaking part) now it is kinda useless as a tea infuser mug. I use it as a large cup to drink my matcha lattes out of and occasional for cold steeping. Luckily I was planning on getting a leak-proof travel mug, maybe it heard me talking about my plans and broke out of shame?

Ah well, it was a good little friend while it lasted.

As far as portable infusers go, this is by far the most superior one in my humble opinion. The sole reason for this is not the aesthetic, nor the BPA-free plastic and what have you. It is for the sole reason that the little strainer can, with the switch of a lever, be taken out of the water at will and thus you have nearly full control over the steeping time.

This is key to any tea epicurean, not so? Even the finest Yi-xing clay tumbler has nothing on this piece of plastic for this one reason. None of the portable glass presses that I’ve seen, or any other tea traveler, mug or tumbler has this option. All except this one, will leave the leaves in the water until you empty the tumbler – this is a fatal shortcoming.

All other qualities are touched on in the other review. I’ve had mine for 6 months and have had no problems with it. Water stays very warm, never spilled in my bag etc. I’ve dropped it x times to many though, far too many, and it’s not as pretty as it used to be – but it steeps as well as ever.

I’ve only had this mug for a short time but I am in love. I would never take tea anywhere before because, like most people, I hate oversteeped tea, and couldn’t find an infuser that worked like I wanted it to – this one definitely fits the bill! I am a bit of a wuss when it comes to hot tea, and this mug keeps tea the perfect temperature for me – not scalding like some metal travel mugs, but not too cold, either. Hopefully the plastic will be able to stand wear and tear because I plan on using this all the time once I go back to work. :)