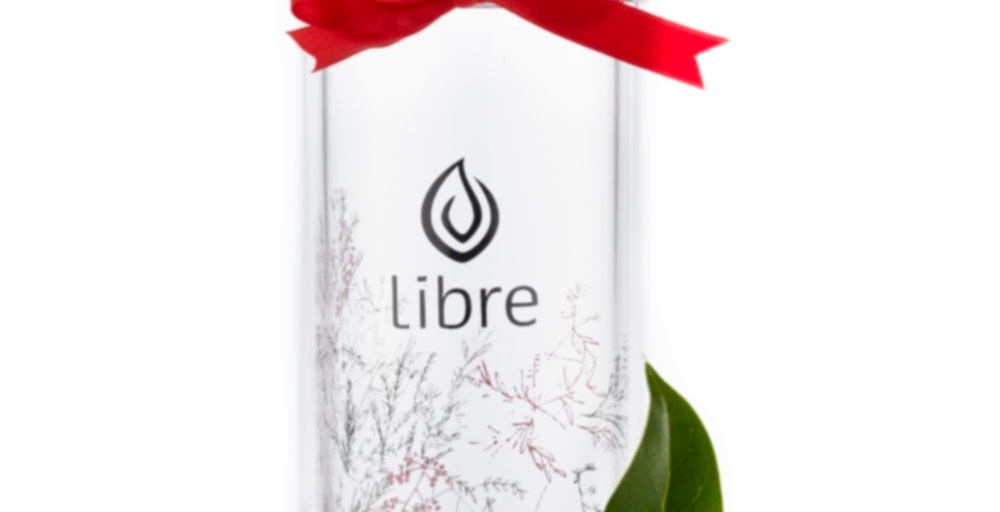 Serene Black Brush for every occasion – just like the ‘little black dress’ that goes everywhere so does our new Black trimmed LIbre tea glass. Its serene and delicate pattern of light brush strokes and small clusters of pale blossoms invites you into a tea moment every time you gaze at it. And now truly, a tea moment with basic black – anytime, anywhere. And with the new masculine black, the men are gonna want it as their best ‘to go’ tea drinkin tool.

The Libre Life Black Brush is oh so portable – the easy clean glass is great for all teas hot or cold, and fruit’n herb waters – just wash up and you’re ready to go with no left overs of your last beverage taste. Do you love to invent your own beverages with fresh fruits and herbs, or cucumber and citrus? The removable filter will keep these ingredients in the glass flavouring your water for original refreshment. Perfect for car cup holders, pop on the lid for carrying in your travel pack, purse or yoga bag.
The Libre tea glass – an opportunity for tea moments all year round.

In grand ‘me’ tradition, I was super derp on allergy meds last night, so I spent the entire night playing Terraria. Yes, good old Terraria, haven’t heard me talk about that game in forever, because I have not played it in forever! I lost my info when my previous computer died and gave up in frustration, but decided to give it a go again after seeing good things about the recent updates. I have a love hate relationship with that game, there are just so many things going on that I feel overwhelmed, but at the same time, I do love all those options. It is a fun distraction, even if I do die more than I would like to admit.

So, it has been a while since a tea gear review, and it is practically criminal that I am just now getting around to reviewing my travel steeper that goes pretty much everywhere with me. The Libre Black Brush Tea Glass, to sum it up, is a thing of beauty! It is so pretty with its black lid and base and matching black tree branches reminiscent of trees in winter. You are probably saying ‘but Amanda, wouldn’t you prefer the teal one since you are obsessed with teal?’ surprisingly no, I prefer the black because it goes with everything.

Now, on to the pros and cons! The pros (other than it is pretty!) I love that the outer wall is plastic while the inner is glass, meaning yours truly is less likely to break the blasted thing when I inevitably drop it, also it seems to insulate better than the double glass one, meaning less burning of the hands, so yay! The size is great, it allows for the expansion of the inevitable oolongs that I like to drink. Also I am a big fan of the way the lid is set up, being made of two parts, a lid and a filter, and rather than it being a basket it screws on, meaning if I don’t want the leaves in there or something I don’t have to fiddle with a basket.

Not everything is perfect though, I think my biggest complaint is it doesn’t go in the dishwasher! I really like being able to run things in the dishwasher, especially when I have a cold or something for that extra step of disinfecting. I had to buy a special sponge thingy on a stick to clean it, and taking all the washers and such off to make sure I do not get any weird mold growths anywhere is a bit of a pain, especially when I use this thing a lot. Also sometimes the lid does not screw on right and my purse, pocket, or self gets utterly soaked with tea, though I am pretty sure that is user error because I have weak little wrists.

That little flaw us pretty much the only thing that is a problem with this steeper, I love this thing, I get lots of compliments when I take it out and about. I use it for cold steeping as well as just regular ol’ steeping while out and about. I will say it is a bit expensive, but even though I am a total tightwad, I think it is worth it. If I was very wealthy I would buy one of these for all my tea drinking people as gifts.

For blog and photos: http://ramblingbutterflythoughts.blogspot.com/2015/08/libre-black-brush-tea-glass-tea-gear.html