This place has closed :( 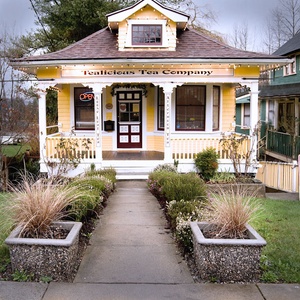 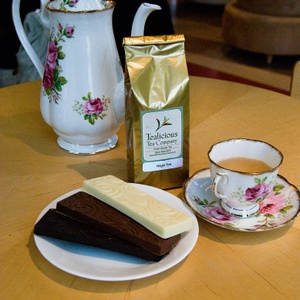 I didn’t actually stay for tea here, because it’s strictly by reservation, from what I gleaned (it’s such a small place, and doesn’t have a large kitchen, so the nice woman explained how twenty-four hours advance notice was needed for her to prepare things); I was only there to look at retail anyways. The whole place (or what I could see of it) wasn’t much larger than the first (retail, tasting, teatogo area) room of the Urban Tea Merchant. Tiny! But in a wonderful, homey sort of way. And quite British.

She sells her teas in prepackaged bags of 50g or 100g, which was pretty different—Murchie’s weighs and packages your loose leaf in front of you, as does the Urban Tea Merchant, if you don’t want the specific weights they sell in tins. And her bags are so professional and nice—these small, plasticy metallic green ones, with the logo and type on the front, and rolled down very tightly (reminds me of buying coffee beans—not that I have, but I’ve seen the bags). She also sells a variety of very nice tea tins, the largest probably able to hold about 4oz. The smallest were these TINY little ones (could probably hold 1/2oz tops) that I desperately wanted for travel purposes.

She was very polite and patient, and let me smell a few teas before I ultimately purchased a 50g bag (metric!) of 1001 Nights, as well as a little gold tin (with stars) to hold it. I was thinking of getting her Canadian Maple Tea, but perhaps next time. I’m sure I’ll be back.

Edit: Decided to add on to this because I ended going back to buy more teas. French Canadian Maple, of course, and I intended to buy her Black Ginger as well, but she gave me a free sample instead. She is actually on Steepster now, (tealady1 if you would like to say hello), and she brought up Steepster in conversation and I said that yes, I was AJ (I was pretty embarrassed), and she had commented on my post about 1001 Nights. She said I didn’t look like AJ, and I had to explain that I’m a big Doctor Who fanatic and that I cycle my icon through the different Doctors (I was actually thinking of changing it to Six before I left today, but realized that I didn’t have any good ones right now; I think I will go find one now). I also noticed that she had a glass n’ glass Libre on display in her shop, which I thought was really cool. I meant to point it out, because I have the glass n’ poly one, but I ultimately forgot to.

So I ended up coming away with two more teas (French Canadian Maple and Black Ginger), as well as three tins; one large enough to hold the Maple, and two small travel tins (the ones I spoke of earlier!). As always, she was very cheerful and helpful.

. Caffe Divano
no ratings yet
0 ratings