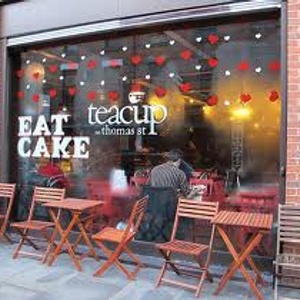 Oooooh what to say about Teacup. My first visit was for a birthday treat and we splurged out on the afternoon tea package and I have to say it was spot on, Reasonably priced, lovely sandwiches and a divine selection of cakes. I had this with a pot of Rooibus and the service was very attentive and when we couldn’t finish off the scones they were boxed up for us to take away.

A second visit at lunchtime was less spectacular – ordered a fish finger sandwich and a pot of Assam, the tea itself was nice as was the food but it all just felt a little pretentious, it’s too clever for it’s own good. Price wise it isn’t cheap either and for a pot of tea you are looking around £4 upwards even just for breakfast tea.

I would go back to Teacup for the afternoon tea but for just a brew I would frequent North Tea Power or the newer Fig & Sparrow, both within walking distance of Teacup.

A nice place to visit – just remember its not cheap!

N.B Reduced down to three stars in 2014 due to many more excellent and reasonably priced establishments close by. It’s still worth a visit – it’s just not the same anymore

A friend has been telling me about this place for ages, so we finally made plans to go today. I’m so glad she took me, I would never have ffound it on my own as it is tucked away in a very inconspicuous side street. I loved the experience from start to finish. I had the second flush darjeeling, which was really lovely. My friend opted for the earl grey, which was divine. Each tea came to the table with a timer, so the tea was perfectly steeped (and then decanted into another teapot). The staff were very knowledgable and extremely friendly to top it all off.

. The Wizard
no ratings yet
0 ratings