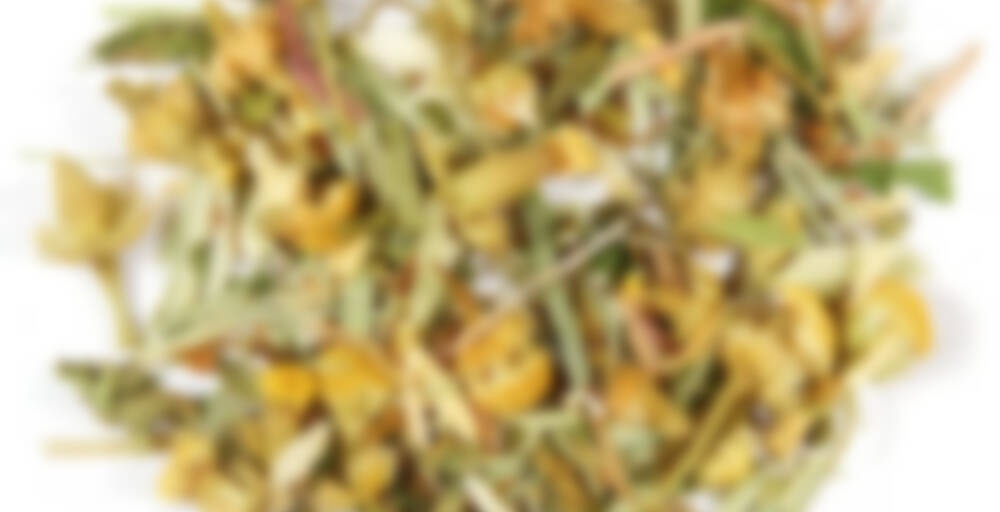 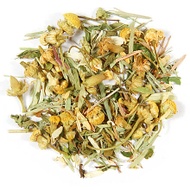 by Adagio Teas
75
You

Much like the Cuban dance for which it is named, famous for its three quick steps (‘cha-cha-cha’), Cha Cha deliciously mingles chamomile, peppermint and lemongrass into a wonderful herbal concoction sure to send your taste buds dancing with delight. Zesty flavor, layered in aromatics: cool earthiness from the mint, sweet, uplifting floral from the chamomile and lemongrass. This cup has a lot of depth. Enjoy any time of the day – this blend is naturally caffeine-free.

This seems to be an unpopular blend on this website but I love it for a light night-time treat. This herbal blend mostly tastes of chamomile but the addition of mint and lemongrass provides a pleasant background to the chamomile. This is a soothing tea, so although lemongrass is present, it isn’t very noticeable and certainly does not make this “too lively” for night-time.

And the price is great at about $6 for a medium bag….

I used to love chamomile. Mum would give me chamomile tea whenever I had an upset stomach, and it was always nice because chamomile is naturally sweet and usually medicine is…not. Now, whenever this happened, we’d be talking in Polish, so I only knew the tea as “herbata rumiankowa.” It actually took me an embarassingly long time to figure out that the rumianek that mum gave me and chamomile (which I read about in books – for some reason it appears a lot in fantasy novels – and was like ‘oh look, it are another herb that helps with stomach problems’) were in fact the same thing. I still have no idea how to actually pronounce the word, though.

Fast forward (mumble) years and we get to last fall when I had the Wussy Flu of Never Going Away for like three months. My fever never went above 100, and sometimes disappeared altogether (note: do not attempt to measure your fever orally right after drinking tea, it only leads to panic), but I basically felt gross, lethargic and nauseous for the entire three months. To counteract the nausea so I could, you know, actually eat something, I drank a LOT of chamomile, sometimes mixing it up by making a particularly chamomile-y cup of foxtrot.

Eventually, chamomile itself started making me nauseous. Which I call RUDE of my subconscious or whatever’s doing it. At the time, I just switch over to mint/ginger (or a combination thereof) tea, but the effect has persisted and has, in fact, extended itself to foxtrot. Which is why I have 1/2 a container of delicious, delicious foxtrot sitting in my tea cupboard that I CANNOT drink – although I’m hoping the association will go away at some point.

Why did I tell you this story? Well, for one thing because I enjoy whining. But also because I CAN drink cha cha. Maybe because it has mint in it? Mind you, doesn’t foxtrot also have mint? /checks. It totally does! In that case, I got nothing. Maybe cos the lemongrass is sufficiently distracting FROM the chamomile?

Actual Tea Discussion and Not Storytime: As displayed by my enthusiasm for Thai Chai, I enjoy lemongrass well enough, although here it is hard to distinguish where the bite from the lemongrass leaves off and the spearmint begins. Still, I am getting all three things here, so that’s good. It’s a nice refreshing tea, and leaves you with minty fresh breath! But if I could be drinking foxtrot, I would be.

Boiling 5 min, 0 sec
Yours I Like This
7 likes
3 comments
Edit

This was a fun read! I hope the bad tea association goes away soon! I get that way about perfumes and music.

Lol. Wussy Flu of Never Going Away. I think I had that one!

Amazing note – I enjoyed the storytime! I also enjoyed the fact that you clarified “oral” thermometer :D I’m also sorry about the negative association. If you were kidding about how to pronounce chamomile then ignore this: cam-oh-meal. But I’ve heard others say: cam-oh-mile.

Tea of the evening……

I have been having trouble with insomnia lately. I decided it was time to give chamomile a try. This intrigued me because of the addition of lemongrass and peppermint. In theory, it sounds like such a relaxing and comforting tea.

Not bad. I think it will take some getting used to. Chamomile is not a favorite, but this is pleasant enough with the other players. I might even add some tulsi next time.

You mention that you’re not overly fond of chamomile. I find I’m pretty similar in that regard. However, I’ve found that a fantastic substitute flower for an herbal infusion in the evening is chrysanthemum. The flavor is light and sharper than the chamomile, which (in my opinion) seems to coat the mouth. To enhance the chrysanthemum’s natural sweetness, and to help you drift off a little easier, try a very small amount of honey as well (only natural, preferably local honey, or you get that gross processed honey flavor).

Forgive me, tea father. It has been three months since my last tea-logging.

I’ve never been a chamomile fan. Medicinal, acidic, jarring, and the bane of Peter Rabbit’s existence: these are not positive recommendations. In my childhood, before having my very first cup of chamomile tea, I clearly remember thinking, “Gee whillikers, chamomile must be swell! It’s the tea that Beatrix Potter built! Golly!” Clearly, I had the brain of Leave it to Beaver. (That explains a lot, particularly since I was an 80s child.) Imagine my youthful dismay, then, when I found that instead of the warm, honeyed confection I’d assumed chamomile tea to be, chamomile went down like a cupful of battery acid left out in a meadow. In the rain. With a cake. After this negative experience, of course, I thought I’d never have that recipe again.

Imagine my shock and awe, then, when I stumbled upon Adagio’s Cha Cha blend of chamomile, peppermint, and lemon grass. It came as a free sample, and so it was with trepidation that I tried it out tonight — but ah, the wily tiki tea gods had a lovely surprise in store! Light, mellow, minty, chartreuse in color, and with just the right touch of herbaceousness … this is what chamomile should have been all those many gee-Wally years ago. The peppermint and lemon grass are in great balance here, virtually obliterating any overt bitterness of the chamomile. I put a little sweetener in it, too, as is my addictive wont, which seems to make the flavors “brighter.”

Now, let’s see if this dusty ol’ tealog can still hack it at the ol’ tea-haiku game:

When I first tried chamomile it was in a similar blend with mint and lemon. I loved the tea so much I figured I just had to have chamomile plain. Agh… mistake. Chamomile is best blended with other herbs, especially mint.

Indeed. I wish Peter Rabbit had included some advice to this effect, as it would have saved us all a lot of childhood jading.

I lost track of the steeping time for this, but that’s why I love easy herbals for bed. I don’t have to worry about it!

So this is a combo of peppermint, lemongrass, and chamomile. These all seem to mingle nicely when I smell the tea, but not when I taste it. Heavy on the chamomile maybe, the peppermint does come in for a little refreshing zing.

Not sure I’d re-buy, I have other sleepy time teas I prefer like Foxtrot.

Reunited and it feels so good! I just had 4 cups of this tea. A lot more flower stems than I remember, but I guess that’s a testament to how fresh the chamomile flowers are.

Thanks to TeaEqualsBliss for the tin of this!

I didn’t get home til midnight last night, there’s a brand new blanket of a foot of snow on the ground, and I have a sore throat. The thought of black tea, my usual morning cup, made me ill, so I reached for this one for some throat-soothing instead.

I was disappointed, sadly. All I could taste was lemongrass with some chamomile in the background; no spearmint. And it didn’t do much to soothe my throat, either, even with some honey.

I like Foxtrot, the other Adagio chamomile blend, much better.

First, I must say I usually don’t go for Chamomile. Altho I think it’s BRILLIANT in the Adagio’s Foxtrot Blend. For the heck of it I thought I would add this Cha Cha to my last order…you know…broaden my horizons – or something like that. Anyhow…The dry leaf mixture’s smell doesn’t do anything for me. It smells just like my cat’s Catnip pouches. Ek! But…I will try NOT to prejudge. It’s near the end of the 7 minute steep right now.

It tastes different than I thought it would. Eventho I can taste quite a bit of the Chamomile…I think the Lemongrass and Peppermint blend well with it. Personally, I would try and a little more of each ‘just because’…and I have both in bulk at home from the whole food store so I just might try it next time…

I think the peppermint that is in this blend helps more with the after taste than the actual ‘during the sip’ taste. That’s kind of neat.

After almost the whole cup – I have decided I like this. A Creative Blend. Very Nice.

This sounds very similar to Tavalon’s Serenity, which I enjoyed.

Mix this with 4 slices of ginger root, then steep for 6 minutes and you will have one of the most deliciously spiced and minted herbal teas in your life.

I made a pitcher of iced cha cha the other day and I added a small amount of rooibos mainly to make the end product a more pleasant color. I think this will become a staple for me during the hot summer months.