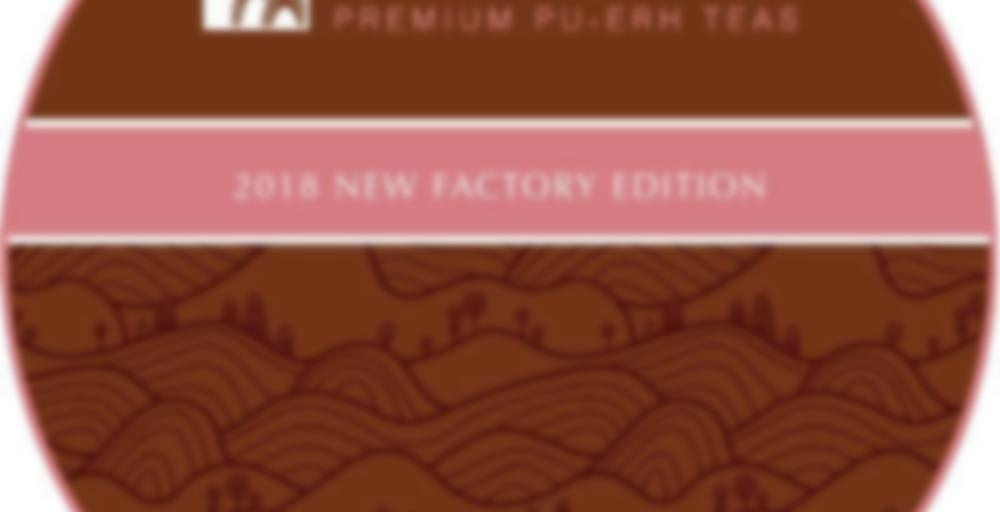 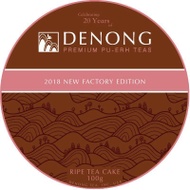 This ripe Pu-erh was made in our newly built factory using our new aerial fermentation technique. This tea with a full-body sweetness, expresses a strong hui gan.

Denong is a Chinese company specializing in premium and ultra premium pu’er. A couple years back they finally established their US branch. Although I’ve heard them mentioned here and there, there doesn’t seem to be too much buzz surrounding them here in the West. Curious to try their offerings, I finally placed my first order with them. I ended up picking up two of their ripe pu’ers, this being the first one. For many of their teas they don’t seem to be offering samples, the option of picking up a 100g bing instead of a full-sized one being the closest thing to that. That was the case with the two teas I got, this and the Cherishing Destiny ripe.

My bing seems quite tightly compressed, which might result in it aging slower under less humid conditions. I ended up using my 120ml silver teapot, which I may end up using for evaluating ripes from here on just to eliminate the guesswork of having to try to pick the right type of clay to suit the particular tea. Usually it’s Yixing, but I’ve found a few teas complemented better by Jianshui. I went with 9.5g which is pretty close to my normal ratio for shu, probably a little heavier than most people, less than some. Single rinse for ten seconds, followed by a rest of five to ten minutes. I did a total of eleven steeps, the timing for these 10s, 10s, 15s, 20s, 30s, 45s, 75s, 2 min., 3 min., 5 min. and 8 min.

Sweetness and earthiness are the tea’s two defining characteristics throughout the session. The texture is smooth and the earthy character aside the tea sips very clean from the first brew. While not the darkest tea, the broth develops a deep mahogany hue in the middle steeps. The sweetness grows ever so prominent as the steeps progress, without ever becoming overly so. The combination with very clean notes of dirt is not something I have encountered that often. Other notes you can expect include nuttiness, berries, wood, even savory. I also encountered notes of tobacco in one steep which was interesting for a ripe, along with some mineral metallic notes in another.

I did not encounter much qi, perhaps a slightly calming, grounding effect, which is pretty typical for shu. For me the things that stood out about the tea were the way how it traveled all the way to the back of the mouth just by taking a regular sip and the way how it went down almost effortlessly as you swallowed. For those with less experience with pu’er this might sound weird, but these are truly the hallmarks of a great tea. Combined with the smoothness, this was a tea that was a joy to sip. In terms of taste it’s not overly dynamic, but there’s nuance to be found and the strong long-lasting sweetness is something many fans of pu’er will appreciate. With the extended steeps toward the end the soup grows dense and heavy, showing great longevity. I stopped after the close to ten minute steep as the tea was finally starting to show signs of growing watery, but those wanting to get absolute everything out of their tea could have carried on with progressively long brews.

Overall I enjoyed this tea. As far as premium ripes go, I wasn’t crazy about it, but I enjoyed it and the quality was evident. The problem is comparing it to other ripes around this price point I’m not sure it’s worth its price tag. Crimson Lotus Tea’s Storm Breaker is roughly the same price per gram and it’s a tea I’d likely recommend over this one. There are other examples as well. That being said, fans of smooth shus with astonishing huigan may want to give this one a shot if the price is not an issue. On the merits of its quality and my overall enjoyment I’m going to award it a recommended status as this is a tea I would absolutely recommend were it cheaper. For me the 100g bing is perfect as I do definitely want to revisit this tea later and am curious as to how it will develop, but a full-size bing would be simply too much for me.

I tasted some of their teas at the Toronto Tea Festival and was quite underwhelmed. Of course, it is impossible to make any conclusive judgements in such a setting, but it didn’t make me want to buy any of them to try at home.

I skipped their sheng completely since many of them were $200+ for a 100g bing with virtually no information provided. I received a 2g sample (yes, a whopping two grams) of their black tea with my order and while I don’t drink blacks that often it was probably one of the better ones I’ve had. Not cheap, but better than the two ripes I’d say.

Denong also made an appearance at the San Francisco Tea Festival. They were pushing health claims hard which turned me off.