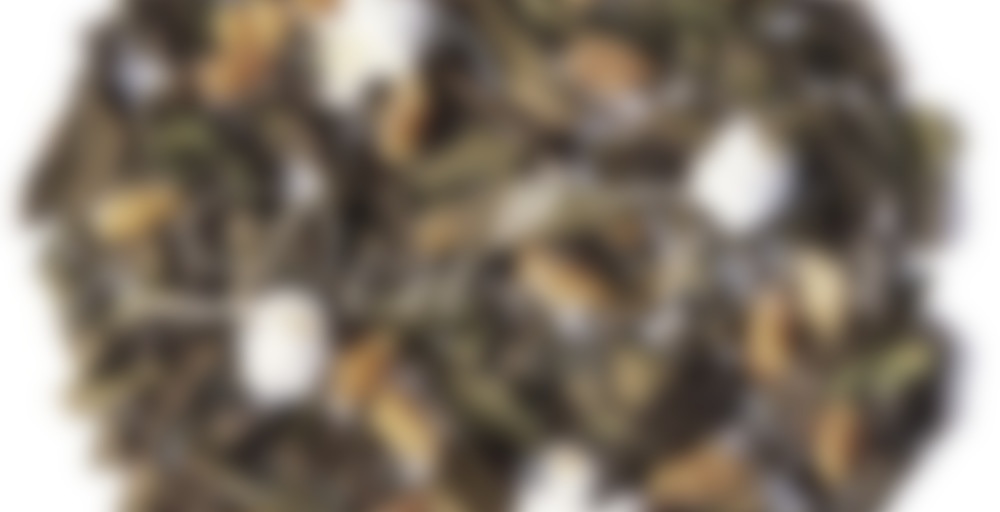 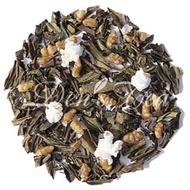 Houji-Genmaicha consists of the two harmonious yet slightly contrasting taste components. It is a good alternative to sweetened coffee.

For a cup of Iced Tea: Put 50% more tea leaves into a teapot. Steep as directed for hot tea. Once you brew it, put ice into the cup to lock in the aroma.

So, tonight I brought out my box of samples from Alphakitty and hung my head in shame that I have ridiculous amounts of so many of them left. Here I was wanting to make a Harney order, and I have at least 3-4 cups’ worth left of both Tokyo and Bangkok, plus 1-2 cups of Paris and Boston. SoHo blend is now gone (note forthcoming), but… still! Bad me. I should at least finish what I have before I get more.

Anyhow, apparently last time I tried this, the tea:water ratio, even with a 1 minute infusion, was too weak for me. Tonight, in spite of just having drank a wicked cup of Mayan Chocolate Chai…. my 30-second infused cup is quite tasty! Toasted and like genmaicha, but definitely sweeter and lacking any “green-ness”. It’s more like… just the rice, with a base that’s less apparent than the usual green genmaicha base. I should try a higher leaf:water ratio just for curiousity (this is super smooth, so I think there wouldn’t be any negative effects), but I’m happy how it is tonight.

Thanks Alphakitty! I’ve decided to tackle one swap box every week or so, and make as much progress in the evenings with it as possible. I have been neglecting my samples lately, and am worried that they’re all going to get contaminated! (My samples from tea companies are of course better packaged, so less chance of contamination).

ETA: Oops, neglected this one during its second infusion…. but I am pleased to report that a 2-minute second infusion in boiling water (about 1/3 of the original volume) results in a pretty darn delicious (small) cup! No astringency, just toasty sweetness. It reminds me an awful lot of puffed wheat, like in puffed wheat squares…. I like to eat that stuff by the handful, haha. Delish!

Haha, I still have samples from you left to try as well! Don’t feel bad. I also sent you like 30 or something so I’d assume it would take a while to get through.

I’ve been neglecting my swap boxes sooooo much.

Honey, I’m home!
:)
I am finally home from the wedding, which was beautiful, as weddings always are, & I enjoyed playing, as I always do. There was one small glitch, lol. The photographer was standing in the middle of the aisle, it was almost time for the mother’s to be seated, & I was going to play Jesu, Joy of Man’s Desiring for the moms to enter to. The Photographer turned around, looked at me, & nodded, which I took as a possible cue (although photographers don’t usually cue me), then I saw the wedding planner wave her arm from the back, which looked like a real cue to me, so I started jesu, only to discover that it wasn’t time yet, so I turned it into some improvisation & waited…sigh…until the real cue came. Otherwise it was all great, the bride was gorgeous, etc.

And the Cardinals own the central division in the National League! Yeah!

And this tea: I like it! I used to have some Houjicha in my collection, & I’ve always enjoyed its roasty flavor. What a great tea to use as a base for Genmaicha! It really adds to the roasty flavor, making it ever more savory & it is delicious. I almost feel like I’m having a meal in this cup, like a savory roasty winter root stew. Luckily, I’m actually cooking a real meal, breakfast for dinner, cuz I’m starved!

haha we had breakfast for dinner too!!!!

Glad to hear we’re on the same page!

This smells great for a Genmaicha – roasted rice almost like a soy sauce type stir fry thinger-muh-jig. The taste is more mellow than I expected but still good. I would drink this again but don’t know if I would buy a large quantity

Thank you to TeaEqualsBliss for sending me a sampling of this tea. It is one that I’m really excited to try, because I am so fond of both Houjicha and Genmaicha.

This is really good. Definitely different, but different in the best way possible. The roasting of the Bancha as well as the popped rice gives this a really interesting depth of flavor. I like it!

I’m off to write a review for the Tea Review Blog!

Hmmm, I guess I never tea logged this tea?
I did a blog post on this tea when my crazy tea blog was new http://oolongowl.wordpress.com/2013/02/07/houji-genmaicha-from-dens-tea-tea-review/

I’m on a Houjicha run today, this being the 3rd type to drink. Thankfully this tea has little in caffeine.

Anyways, I’m thinking I’m preferring Yunomi’s teas as they seem more intense in flavor. Den’s, though this is a genmaicha, is light and has a vegetal brothyness to it with a peep of roasty flavor. The resteep does have a nice buttery flavor, which I enjoyed. Overall, I’d probably not buy more of this and go with a straight smokey strong houjicha instead.

What are your favorite kinds of of strong, smokey houjichas that you would recommend?

But this one might be more to your liking, but I haven’t tried it http://yunomi.us/shop/355/obubu-tea-13-houjicha-smoky-roast-clearance/

I’m definitely gonna put an order on that website, they seem to have a lot of cheap sample sizes so I’ll probably just go crazy on a big order. Any must-have recommendations from them?

I’d snag a Gyokuro for sure, I liked the heritage ones. I also really liked making my own genmaicha with their genmai + whatever base (houjicha was good, so was their Obubu Sencha)
They have some experimental stuff – like Japanese Oolongs, I haven’t tried my sample yet to know if its good or not.

And if you want something very unique http://yunomi.us/shelf/tisanes/sakura-tea/

Thanks for the recommendations! I ended up placing an order for over 500g with about 20 teas, including the ones you mentioned. Can’t wait for it to arrive, the suspense is intense O_O"

I added this onto my Den’s Tea order almost on a whim, because I really am not all that much of Houji fan. I do love Genmaicha, though, and the site indicated the low caffeine would enable a nightime cup of this. So that’s what I did last night. It’s pretty good! The roasted rice stands out and the Houji compliments it well. I do think this will work for an evening cup of “real” tea!

This is a fun tea, and really good iced, too.
I don’t like it as much as the regular houjicha, but it is a nice change. I noticed the dry leaf has a lot more kuki (twigs) in it than regular houjicha.

Once again, I’m attempting to make some Iced tea, still attempting to get iced tea the way my host mother made it. I steeped this hot (30 sec, with boiling water) and then waited for it to cool and stuck it in the fridge.

The roast smell still is there, and this is pretty similar tasting to the iced tea that my host mother in japan made. The taste is very good. A little nutty and the roasted flavor is coming out. The roasted flavor is almost a little too strong for me, but this was definitely a successful attempt at iced tea. I should try this method for other teas. I just think this tea works as an iced version very well. I don’t really even want to try it hot!

Ever since I found out that this tea existed, I’ve been wanting to try it. Houjichas and genmaichas are two of my very favorite types of teas, and I am always turning to one or the other for comfort or as a palette cleanser or for any other excuse. Today is a warmer day, so I opted to steep this one extra strong and pour over ice to drink as an iced tea. As it was steeping, I really could smell the strong genmaicha toastiness. When the tea finally cooled, I was surprised to find that the dominant taste was houjicha in contrast to the smell while it was steeping. In fact, for the first couple sips, all I could really taste was the houjicha. After settling into it, though, I can definitely pick up the toasty genmaicha toward the end of the sip. These teas blend together so perfectly! Perhaps they don’t quite contribute completely unique flavors to the tea, but I’m okay with it. I love my roasty Japanese green teas :)

If you let it steep for awhile it will eventually smell of Genmaicha but the taste is always like roasted Kukicha. Really, it just tastes like Kukicha so why not just buy Kukicha?