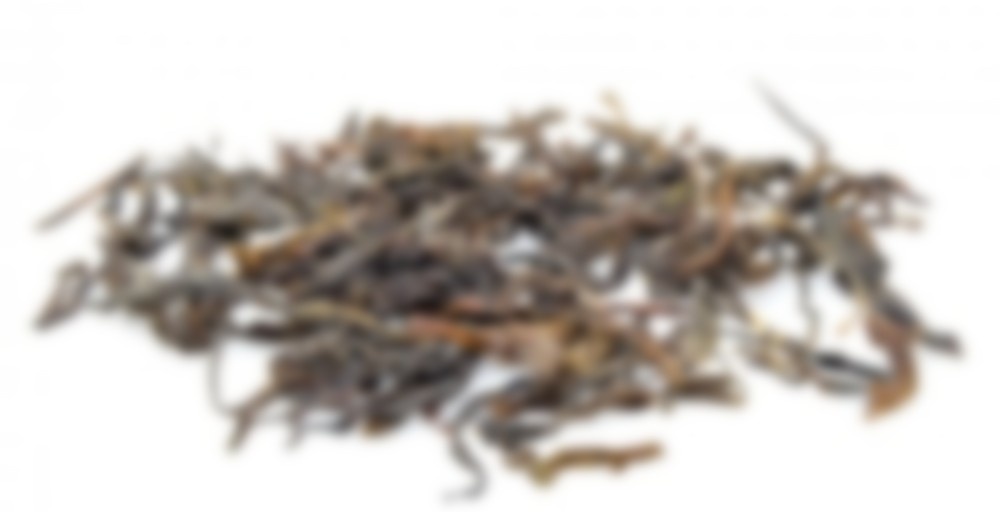 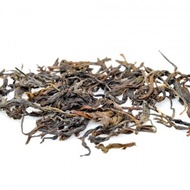 The raw material of this tea has been stored since 2008. Now it has been naturally fermented. The aroma is strong with the special raw tea note. But the tea soup is in amber color, mellow, smooth, a little bitter but has very sweet after-taste.

After my adventure with the golden flowers you might think I would be leery of another puerh. Nope. Not gonna happen. Wouldn’t be prudent. Steeped this one for about 30s. It made a light amber cup with a burgundy tint. Took one sip and wow has this got a bright metallic taste. So I added some Splenda – the great equalizer – to calm it down. This is still quite bright and young tasting. As the cup cools I realize what I thought was metallic is actually the beginnings of earthy notes. I like this. Nice sticky lip feel. In my attempt to learn about puerh I have stumbled across information that leads me to conclude this will make an excellent cup once it has more time to age.

I steeped a total of 5 mugs in my western style. Each cup bacome a little darker and a little sweeter than the last. Conclusion – I like me some young raw puerh.

You sound like someone I could drink pu with! I put splenda in salty pu’s to bring out the caramel flavor sometimes. I make latte’s with later steepings and let it go for 3 minutes then add my extra’s.

Nothing would please me more than to sit down with you at Happy Lucky’s and share a pot or three :)

Ya beat me! I’m still mulling over my thoughts on this one. Have all the notes, but haven’t had time to pull them all together into a succinct review yet. That “metallic” taste seemed really more sour to me, a bit too unpalatable on some steeps.

Sometimes that metallic thing isn’t a taste but is kind of a metallic teeth squeegie feeling that you used to get with old fillings (does anyone know what I mean by this?) when the Dentist was putting the metal into your mouth. Blech!

I often read that raw is supposed to be astringent. I have never found that in sheng. My brain interprets it as metallic bordering on bitter.

I get the dentist comparison. I think it is almost like putting your tongue on a battery. Can’t quite describe it better. Note really acid like tomato but something…

Cody don’t be afraid to add something to sweeten it. If it were food you wouldn’t think twice about adding things to improve your experience.

Ahhh I see. It still did taste sour to me though, but I understand that metallic-like experience you’re hinting at, and looking back I can remember that experience, but just not being able to put my finger on what it was at that moment. Pu’er is still really weird for me to describe, but I’m getting better as I taste more types.

As for sweetening things, I actually don’t really like adding lots of seasonings or sugar and such to the things I eat/drink. I tend to keep things very minimal or not at all. When I was younger I used to add flavorings to everything, but as I’ve gotten older, I think I’ve gotten quite sensitive to really salty, fatty, or sweet things. I may look into adding a touch of sugar the next time I get a really sour or bitter brew, though. I’ve added sugar and milk recently with potent black teas, but I guess I never considered it with others.

It’s the saltier shu’s that I add a little sugar to (in later steepings) because you get a caramel flavor most of the time when you do that. It’s quite nice.

I have a few shu samples that I have yet to try. Maybe I’ll keep some sugar on hand when I taste them and look out for this caramel flavor. I do like caramel! :)

This is an interesting Sheng Puerh because it has a very strong earthiness to it – stronger than I’m used to with a sheng. This is much more like a shu to me. But it has a lot of interesting flavors to it – sweet, bitter (which also surprised me, this savory bitterness), even sour notes that morphed into a gently sweet aftertaste.

A rather unusual but enjoyable Puerh. I look forward to trying more from this company!

PS: Look at this tea set… I want! http://esgreen.com/products-page/pottery/yixing-zhi-sha-yellow-buff-colored-clay-tea-set-tree-stump/

OMG that set is absolutely amazing!

Wow. That price is not bad for all those pieces.

OMG I love trees!! I have stumps from tress others have sadly cut down all over my yard. I want this!

I like the idea and look of the set, my only question/concern is about steep times… It seems to be missing a gaiwan/teapot, so would you not be able to brew something for say 20/30 seconds? Or would you just pour what is in the pitcher back over the strainer for the additional steep time?

Very good tea, Starts off light and grassy with bitterness then goes a little darker almost like a ripe Puerh with no grassiness but still some bitter in a good way, it keeps getting a little darker each time but with a pretty consistent typical aged raw puerh flavor until finally it starts slowly fading away.This is one of those feel good teas to me that gave me the “High” “Happy” feelings that I love so much. I can enjoy this tea for its taste and that wonderful feeling. I’ll end up getting more of this one I’m sure :)

A more gentle Pu-erh flavor which I appreciate and welcome – it’s also a little sweet and a tad sour – a bit woodsy and a little leafy. Overall a pretty good cuppa. It does have some grape type flavors when it gets cold and I really like those!

I’m way behind in my reviews…So I’m not letting myself try new samples until I can catch up on the old teas and allow myself to focus on the new ones. And with that, I will catch up with this pu’er. I steeped the whole sample (I think it was around 4.5 grams or so) in my 100ml gaiwan. I got through about 10 or 11 steeps total. There was a great deal of intrigue in this tea, with a very unique flavor profile. From the first four-second steep, I received notes of mushrooms, cedar chips, a certain grape-like tartness, a faint earthiness, and flavors of overripe fruit. The liquor smelled like old, worn-out leather and age. It actually came out kind of frothy, which was interesting to me, as the height I poured it from wasn’t any higher than normal. The mouthfeel contained a slow and drawn-out huigan that began sparkly and tingly and transformed into a bitterness. There was also a lingering metallic feel to it here.

Into the next steep, all the above flavors increased in intensity while notes of camphor and what totally reminded me of Dr. Pepper were added to the mix. The mouthfeel turned into something fierce in this steep. It was stronger, more potent, and it made the tip of my tongue feel like it was on fire or that it was vibrating or something. Very tingly. This mouthfeel remained like this with somewhat less intensity throughout the rest of the steeps.

As far as flavor goes, the rest of the steeps went downhill from here (at least for me). The next steep was incredibly sour-tasting. And instead of showing up and then fading, it actually expanded and became more intense after a sip. It was kind of like biting into an unripe lime, complete with a great deal of astringency. Bleh. I don’t know what happened here, but it only steeped a second longer than the previous steeping. At any rate, it calmed down into the next couple of steeps, but it was still very apparent.

The steeps faded out with a great deal of earthiness, a bit more spice, and some notes of that overripe fruit taste. Overall, I really liked the tastes it put forth, and the mouthfeel was highly stimulating, but the metallic feeling and sour tastes were just too off-putting for me. However, I did really like the leaves of this one. Although there were a TON of stems in my sample, the leaves became quite green when wet and the ones that happened to be whole had some beautiful veins. The leaves’ aroma was also quite nice. Hints of florals, grapes, ripe fruits, and some nostril-tingling tartness.

You manage to drag more out of one session than I can in an entire week of sipping. Respect.

Why thank you, K S!!! :D I just love trying to pull out every bit of flavor and texture I can. It usually ends up being a long process, but it’s so fulfilling in the end when you can really “get” what a particular tea is all about.