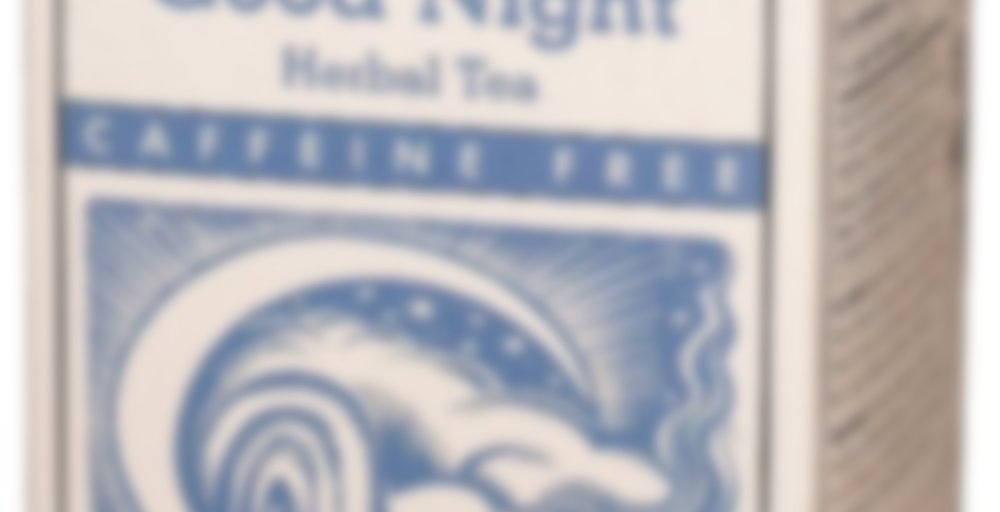 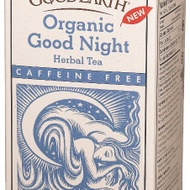 by Good Earth
79
You

Our Tasters’ Notes:
Soothing floral notes with hints of apple and lime.

About This Blend:
Everyone needs to unwind. So we’ve taken soothing organic chamomile and blended it with a calming floral bouquet. The spearmint, peppermint and fruit flavors should ensure sweet dreams for all.

Sad to be drinking my last cup of this now discontinued blend! Lightly sweet with a hint of spice.

My computer seems to be on the verge of dying, after nearly five fun-filled years of me writing tons of text on it. The screen keeps flashing white, and I just lost a lengthy tasting note on this tea, a box of which I found while continuing the seemingly endless excavation of my apartment as I prepare to move hopefully this coming Sunday. I’ll attempt to reconstruct what I just wrote and lost.

I recall always having found something slightly discordant about Organic Good Night, which is of course why I still have some around. I bought a box of six boxes from Amazon, but it was never my first choice for pre-bedtime brew. Something about the lavender and the coriander—or was it the hawthorne?—always struck me as a bit odd. I suspect that sarsaparilla may be among the “natural flavors” mentioned in the ingredient list. I must not have been alone in finding this brew a bit less inviting than some of the usual bedtime suspects, since this blend appears to have been discontinued, as it is no longer found at the Good Earth website.

Interestingly, the company taster notes don’t really mention the ingredients which I notice. They do say something about a “calming floral bouquet”, so maybe that includes lavender and hawthorne. But they also mention lime and apple, which are not a part of my experience of this infusion at all. Maybe I just don’t know what tasting notes are, as the list at Steepster is bizarrely abridged and—shall I be frank? (quoi d’autre?!)— arbitrary and tends to omit everything which I actually notice. I mean, why isn’t almond on the list? Or salt? Why cannot chamomile and lavender be tasting notes, I wonder? Seriously, who wrote the list? Why do I have to taste apple when I am tasting chamomile, when in reality I taste chamomile???? Is it allowed to taste chamomile as a note if it is not among the ingredients, I wonder? I mean, are tasting notes always supposed to be of substances not listed as ingredients? So if I can claim to taste spinach in sencha, then why can I not claim to taste chamomile in a honeybush blend? (As an aside: the “suggest a flavor” function has never worked on my computer for some reason… Does it work for anyone else, I wonder?)

Anyway, of late I’ve been exploring lavender and chamomile blends, of which this is one, except that here there are many other ingredients as well. Tonight I find this brew much less discordant than my memory of it, and its sheer oddity is the reason why I still have some of this creation still hanging around these parts though it cannot be purchased anywhere—at least as far as I can tell. After training on some hardhitting lavenders, Organic Good Night now seems mild to me—even somewhat harmonious!

Jason wrote somewhere in the thread about the new tea page something about them not having actually turned that on yet.

Thank you, Angrboda! I’ve been trying to figure this out. It makes any report of notes rather abridged and in some ways inaccurate…

I’ve never tried using it myself. I can see what it is they want to do with it, but it doesn’t really appeal to me. :)