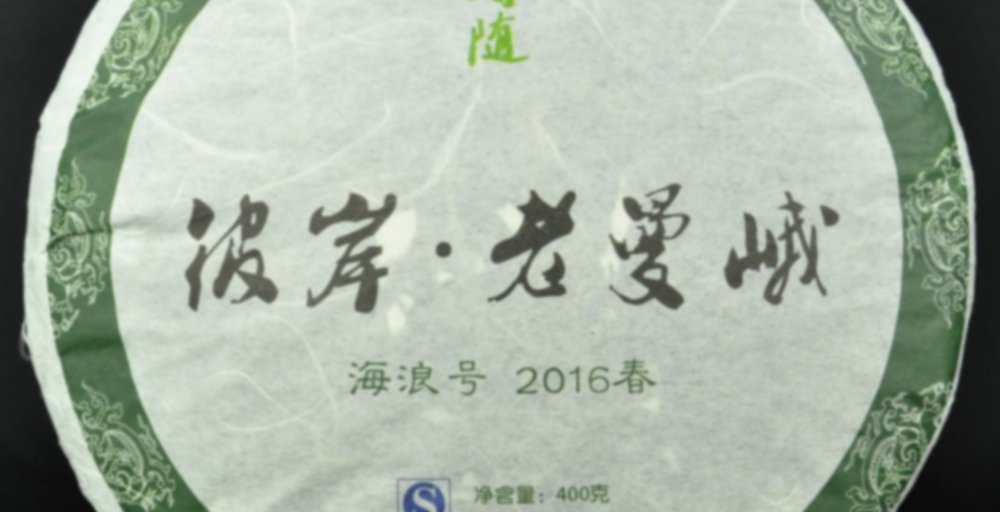 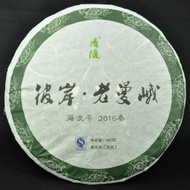 Spring 2016 harvested tea leaves that are 100% sourced from Lao Man’E Village (Bu Lang Mountains) tea from older tea trees. Hai Lang has long been active in Lao Man’E, Lao Ban Zhang and other Bu Lang villages. In 2008 he produced a Lao Ban Zhang and Lao Man’e blend called Lao Ban’e that has since become a classic in China and abroad.

Being pure Lao Man’e this tea is a bitter-fest. Not only is there strong bitterness, there is a strong aroma and very strong cha qi. The tea leaves are burly, and thick and go many many infusions before losing their flavor.

I brewed the entire 10g sample in a 140ml gaiwan. What I received were small, evenly sized chunks without any loose bits. I don’t know which part of the cake they were from, but they seemed fairly compressed in comparison to the more loose-pressed cakes out there. The colors and general appearance were interesting, really bright and just overall a very different look.

I’ve only drunk one raw pu’er that is allegedly Lao Man’e, that being Mei Leaf’s Psychic Stream Seeker, but smelling the dry leaves in a preheated gaiwan I definitely recognized the unique, characteristic scent. The smell of the wet leaves was equally familiar, with an extremely pungent, dirty scent that made me think of something having to do with a kitchen. I rinsed the leaves briefly for five seconds or less and this being such a high-end tea I naturally drank the wash. Damn that’s potent, damn that’s bitter. I’m intrigued.

After a brief five minute rest I carried on to do a total of twelve steeps. The timings for these were 5s, 5s, 7s, 7s, 6s, 7s, 10s, 20s, 30s, 45s, 75s and 2 min. The first steep had a nice mouthfeel, quite oily. Fortunately the tea was still light both in taste and color thanks to the more compressed bits. There was some slight sweetness, with a characteristic touch of citrus and maybe some bitterness in the finish. The second infusion is where the ball slowly began to start rolling. The tea was strong, but not too strong, sour, slightly bitter, a bit sweet. There was a citric aftertaste and the tea left your mouth coated with oils. This was combined with an incredibly mouthwatering effect. This is the stuff.

Infusion three is where the bombs started raining down. The tea was really strong, but not too strong for me though. The distinct grapefruit note I tasted in Psychic Stream Seeker as well was now much more pronounced. Although the liquor was not thick, the mouthfeel was juicy and the aftertaste incredibly long-lasting. Steep four was however even stronger. On man. But I like brewing oolongs Chaozhou style so I like strong tea, just not over-brewed tea, there’s a difference. I was now getting the infamous bitterness, but it wasn’t a bitterness I dislike. Now that’s BITTER, AWW YEA!

The sensory assault continued in the fifth steep, but here was an exemplary example of a bitterness that transformed into juicy sweetness within two seconds after you swallowed. After being bombarded with bitterness, I was so used to it I could have actually brewed the tea a bit stronger for the sixth steep. The tea continued to be incredibly bitter, but I wasn’t getting the sweetness anymore.

Steep seven really surprised by being less aggressive. It was juicy and still bitter but only in the finish. You could taste the tea in your mouth when you breathed out through your nose. At this point I must say it’s really hard to differentiate with this tea what flavor are from the tea in your mouth right now, because this tea just builds up layers upon layers of strong lingering flavors with each steep with all of the past steeps feeding into the current one.

From this point on I finally started extending the steeping time more aggressively and this worked really well in countering the drop in strength. I managed to brew steep eight strong in a good way and it was probably my favorite up to that point. It was really aromatic; you could just take a few sips and then taste the aromatic compounds in your mouth as you breathed out through your nose. There was much less perceived bitterness now, but honestly my tongue was so numb to the bitterness by this point it’s quite possible I just wasn’t tasting it anymore.

With the ninth steeping the tea began to simplify and enter easy-drinking mode. It was still mainly bitter, but there was now less depth, complexity and nuance. From the next infusion onward the bitterness finally began to taper off, making way to an emerging sweetness. The mouthfeel in these late steeps continued to be generally quite juicy. There was some nastiness in steep eleven, but this cleared up for the twelfth steep where only sweetness remained, but the tea was clearly falling off fast. The leaves could have possibly been stretched for a couple more sweet, extra-long extractions, but I was quite full of tea so I decided to call it here.

I’m still very new to extremely bitter raw pu’ers and sheng pu’ers from Bulang in general, but I really liked this tea. Unfortunately a cake is beyond my budget. It’s not even a question of the price per gram being too high, although this tea is by no means cheap, Hai Lang Hao’s decision to press this material into beefy 400g cakes places this already premium tea beyond most people’s reach. Certainly most people who really want to try out this tea should be able to afford a sample, but an actual bing is something most of us can only dream about.

After trying two teas allegedly from this hot village, despite different vintages and the other one being roasted, their flavor profiles matched so well they corroborate one another quite nicely, lending credibility to both. The grapefruit note was much more prominent in the Mei Leaf tea most likely due to it being a younger tea, while the bitterness had been replaced in it by intense sourness due to the roasting process. While it was a very good tea in its own right, I liked this tea even more. I’ve never ordered from them, but I know Tea Urchin offers a couple of Lao Man’e shengs, so I will have to order samples and see how I like their teas. It would be nice to acquire some Lao Man’e both for drinking and aging, but at a more affordable price than the Hai Lang Hao offering. I’m definitely intrigued by this region after this session.

If you’ve never had a tea like this, it can definitely be a very informative and eye-opening experience. Even if you think you don’t like bitter teas, a tea like this could prove you otherwise. Even if it doesn’t, it’s worth it for the experience alone. To try to sum up this tea, it is one of the strongest teas you are likely to ever find, with great longevity to boot. It’s bold, aggressive and extremely bitter, but that does not mean it lacks complexity, depth or nuance. This is a matter of personal preference, but I personally never found the bitterness unpleasant. I should add that that is not generally the case for me with sheng. While the mouthfeel was generally juicy, the tea was never particularly thick and overall the mouthfeel was a bit of a letdown for such a high-end tea. The one other thing I hold a bit against the tea is the qi. The tea didn’t really have much of a noticeable effect during the session, but afterward with quite a delay I suddenly started feeling incredibly exhausted like I’d just run a marathon or something. This was strikingly similar to the qi in the Hai Lang Hao Lao Man’e ripe pu’er I reviewed a while back. The one notable difference in the qi was that whereas the raw pu’er only made me feel physically exhausted, the ripe also made me feel extremely lethargic and uninterested in even doing anything, even not doing anything. Fortunately the exhaustion did lift in a reasonable amount of time, but while drinking a tea like this should leave you exhausted as it is quite an undertaking, the cha qi still didn’t agree with me.

This tea showcases really well why the area is so revered and the fame is definitely justified. If you like your teas strong, look no further.

Yep, this is right up my alley too. I like that old kick in the teeth teas from this area offer. Mang Fei is another area you may like too.

You will have some good stuff to enjoy!