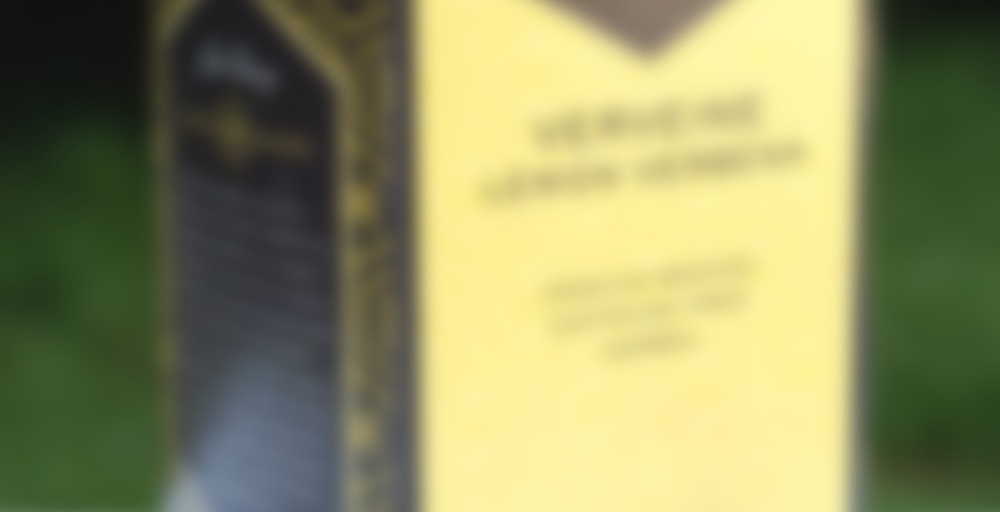 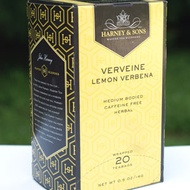 My coworker that recently ordered from Harney & Sons got a few of these silken sachets as a thank you in her order. She passed one on to me. I thought tonight was the perfect night to try it, being Home Alone. Alas, I am a Magic: The Gathering widow this evening :)

I made it with a little honey, sachet left in the cup. Nice! Sweet and herbaceous. Not lemony but…lemonminty? Fresh and good tasting. Nothing I would run out and order (I like my healing herbals from Mountain Rose Herbs when I’m looking for this sort of tea) but if it arrived with an order again I’d be pleased!

Neat! My son just got us started playing it! He and his sisters even play it via Skype!

My sample is called “French Verveine” on its very elegant black and dark gold jacket, but in double checking my order detail and the web site it appears there is really only one Harney product called Verveine, so this must be it!

It’s hard to imagine how I have thus far managed to escape experiencing lemon verbena in the flesh, so to speak. But as far as I know or can remember, I have. I was expecting an alternative to other lemon flavored tisanes, but it soon became apparent that this is something entirely different.

The leaves are humongous, light green, and curl inward along their main vein/vertical axis, and apparently, they are weightless. I put the entire packet on the scale and only came out with enough for half a cup? (Perhaps I am going to regret this?)

Dry, they smell nothing at all like lemon; they smell like a savory spice of some kind. Dried thyme or dried sage, I think. Or maybe even dried basil. Or notes suggestive of all three.

Steeped, it’s a very dark yellow color, and the aroma still has nothing that is smelling to me like the lemon I expected to smell. There is a hint of lemon, but it is more along the lines of the juice from a roasted herbed lemon chicken. Savory and brothy.

And that is pretty much how it tastes as well. This doesn’t taste like a lemon tisane, it tastes like a savory spice tisane with a subtle lemon note to it. It’s tasty, but in the sense of the spicy taste of a very well-spiced poultry stuffing with some lemon squeezed into it.

I am wondering if the scale lied to me and I should not have used the full packet? I’m going to resteep with more water to see what that’s like. I am making this as a full cup (approx. 8 oz) this time instead of half of that.

Hmm. I’m not going to rate this as I’m not sure I prepared it correctly, and because I have nothing to compare it to. In reading about verbena on the web, it seems this is supposed to have a “bright lemon taste” which I’m not getting. Mine is definitely full-bodied, but the lemon is not the main flavor I’m getting, nor is it bright. I’d describe it as sultry.

Well, it’s lemon verbena. Not quite lemon, not quite…. er, anyway. I took a sample sachet of this from the British shop in town, and it’s just okay. I suppose I could see combining this with, um, something I like better. Maybe something with vanilla. But by itself this just isn’t very interesting.

If I’m going to drink a tisane, it either needs to taste delicious, or have some sort of medicinal function. Actually, I guess that goes for anything I’ll drink, deciduous perennial shrub or no.

Interesting! It started off harsh — just what I’d expect from lemon verbena, which I generally find to be an extremely strong and spicy flavor — but it sweetened and softened as it cooled. There were three of these sachets tucked into the box I just got from Harney & Sons, which is a nice little bonus. I’m not sure I’d want this as an after-dinner drink, but as an early-evening-and-dinner-will-be-late drink, I like it.

Lemony, vibrant and light, this tea will make you feel right.

Lovely color. Not really to my taste though. It is a bit too light.

ANOTHER from Ost. Thank you! I’m just burning through Ost’s single samples lately. This one was calling me today, even though I wanted to save the single teabag until summer. I’m glad I didn’t though… it’s not what I expected. Lemon verbena in the past has been like a sugary donut topping…. this is very vegetal or herby with only hints of lemon flavor. It tastes like chamomile to me. The second steep was very much like pine. Maybe I oversteeped? I thought it was just be me noticing the pine, but then it was in the flavor descriptions from other Steepsterers. So this is probably more authentic lemon verbena, but it’s not what I’m accustomed to. Also, even though it was a mesh teabag, the particles seemed to be catching on the back of my throat. Harney’s site now mentions big green leaves. But this version at least has tiny crumbles of leaves.
Steep #1 // 14 minutes after boiling // 3 minute steep
Steep #2 // 10 minutes after boiling // 3 min
2019 Sipdowns: 29

I got this in a teabag sample from Midwest Tea Fest. I don’t drink much in the way of herbal blends these days, but as a preteen and kid I was all about them, so it’s a bit nostalgic for me.

This one smells lemony, as you’d expect with hints of holy basil (not sure if that is actually in here). The flavor is an interesting blend of grassy, reminding me of unsmoked yerba mate, juniper berry, reminding me of gin, and of course lemon. It’s not tart and the lemon flavor isn’t too strong. It blends well with the others.

This is not my typical cup of tea these days, but I didn’t mind it at all. Wouldn’t buy it, but enjoyed the cup I had. Thank you for the sample, Harney and Sons!

I had this tea this morning and wasn’t too impressed. The lemon flavor is light and the tea is creamy, but it doesn’t pack a lot of flavor and ends up being very flat to me.

I bought a box of this a long time ago when I was first exploring tea. I really liked tea with hints of lemon, and still do, so I thought this would be a good buy. This is fairly light tea and not that exciting, but it is doing the trick this morning. Soothing, warm, and lemony. I added a tad bit of honey in hopes to calm the cough. This is not something I would normally drink, but it is a good under the weather tea.