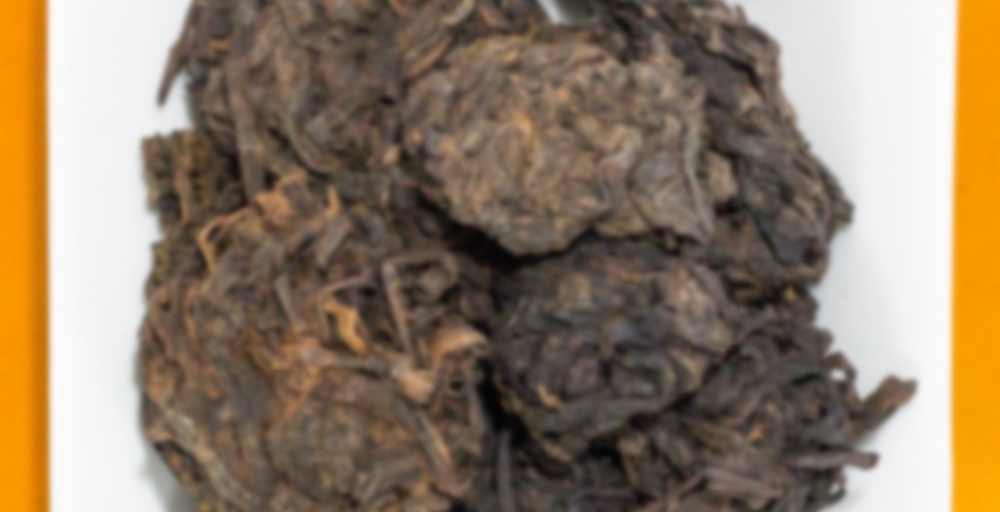 A very uncommon type of Pu-erh tea, Lao Tou means “old nugget”, named for its distinct nugget shape, a feature created during its special production. This Menghai Lao Tou was produced in Menghai County in 1999 and has aged for more than 15 years, creating an extremely different tasting tea. You can steep this tea until you’re tired of it, guaranteed! Subsequent steepings will develop a lighter character and ever-changing earthy tastes.

when I was sent this tea it originally said 1999, but has been changed to 1995, so oops somewhere

I think my computer has a grudge against me personally (ok no, it also hates Ben) because it has the most god awful internet connection in my bedroom. Anywhere else in the house is fine, but in the bedroom…where I do my work…it will not connect. It is driving me absolutely bonkers!! I have finally saved enough money to buy Ben’s birthday present (it is a new computer, woo!) and was going to then save up to replenish my dwindling tea stash, but now I have to get a Wi-Fi booster instead. How annoying!! Ah well, life goes on, at least I got to use the phrase ‘I am priming my ovipositor’ today, which is something I never thought I would say, so life isn’t too bad.

Today is the last day of Dark Tea Week, it is also the grand opening of M&K’s Tea Company’s website! Previously they had an etsy store which I had great fun visiting (especially for holiday themed teas) and spent a great deal of time admiring their awesome aesthetic. Last order I placed (back when I was chillin’ in PA with me mum) I was sent a sample of Menghai Lao Tou Pu-erh (Ripe/Shou, 1999) and holy cheese doodles that was a long time ago, I also say that 1999 was one of the best years of my life until recently, seriously that year was amazing. I was going to post a photo of me from that time, but alas I cannot seem to find one, so you must all be content with just imagining me in my gothic glory. But this is not all about me reminiscing, this is about a tea from bonkers forever ago, hailing from Menghai County in Xishuangbanna, Yunnan, this tea is a real nugget of fun, no really, Lao Tou means old nugget, a result of piling while being fermented. The aroma of these nuggets is woody primarily, with secondary notes of loam, old oak wood (reminds me of an old oak cask or trunk) a forest floor, and a tiny bit of a meaty-mushroomy-savory note at the finish. This is a very woody shou, not as loamy as some.

Into ye’ ol elephant pot it goes! Not the pot that gets the most use in my collection, but it certainly might be the one with the most personality! The aroma of the nuggets (even after rinsing they are still pretty solid) is a blend of molasses, pine forest loam, oak wood, and a touch of meatiness. It blends woody sharpness and loamy earthiness really well, more balanced than the dry leaves. The liquid has a stronger savory note and a nice mineral note to join the woodiness and earthiness, it is not a hugely complex pile of notes, but it is quite tasty smelling. Happy nose!

Tasting the first steep I can safely say, this is a mellow tea. Smooth and mellow, kinda like the guy who insists on always wearing a towel and has convinced me that Old Spice is the best man soap ever. I am officially making him the mascot of Shou Puerh! Anyway, randomness aside, this tea starts off creamy smooth with notes of loam, mineral, and molasses, It then moves on to woodiness and slight sweetness. Finally the tea ends with a bit of leather and loam, it does not linger in the mouth long, but the lingering that is there is mild and sweet.

So here is the fun part, this tea can go…and go…and go…I legit lost count of how many steeps I had, but the best part is it was like drinking the same cup of tea FOREVER. I could imagine this being a real downer to some, especially if you like each steep to be a little different (or a lot different) and usually I do with some teas. Once in a while I want a tea that I can just sit with and not think, I want a tea that sits like a trusted friend and does crafts with me, plays Minecraft with me, or helps me wipe out humanity while playing Plague Inc (I am so awful at that game) It seems kinda mean to call this a background noise tea, because it is not one to have and ignore, it certainly has a presence, it is just a solid unchanging presence.

OMG I FIXED MY INTERNET!!!! I think…How does everyone like the idea of next week being Oolong week? For blog and photos: http://ramblingbutterflythoughts.blogspot.com/2015/03/m-tea-company-menghai-lao-tou-pu-erh.html