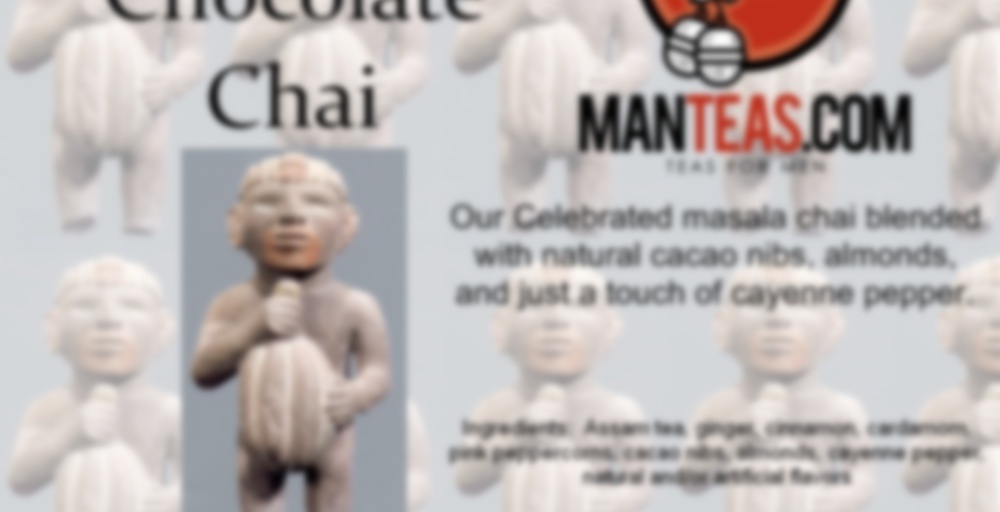 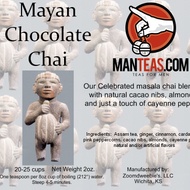 Our Celebrated masala chai blended with natural cacao nibs, almonds, and just a touch of pepper.

We here at Zoomdweebie’s (where we are “Nerdy About Tea”) have started this website to showcase only the manliest of teas. You won’t find any rose petal teas here, or any teas that smell like your grandmother’s air freshener. This is man tea country.

WOAH .. this one packs a PUNCH! Okay so it says just a “touch” of cayenne pepper but ummm it seemed like a lot to me and I do love cayenne. Don’t get me wrong however, it was not TOO much – just more than I expected. I did brew this for the full 5 minutes a chai typically calls for – but I would suggest 3 to 4 minutes and that is what I will do next time. It was very strong in flavor all the way around and I do appreciate a strong flavor but it was just a bit too much. Now I did add milk and some sugar and it was wonderful – the way you would get a chai if you went out but far far better of course! :)
The smell in the bag is amazing – sweet, spicy, nutty, yummm and the brew smells the same. This is one to be reckoned with and I see why they put it under “man teas” lol but this gal loves it! Not for the weak. This is one I will have to be in the mood for but then again I am often in the mood for a chai and this is a GREAT chai!

Oh man. I have GOT to pick this up for my roommate! She’s a cayenne addict, and loves chai. Yet another reason for me to make a 52teas order (it’s from there, right?)

Its from their sister site – but yes same company :)
LOL if she is a cayenne addict she is going to LOVE LOVE LOVE this!

Oh man, I’ve now compiled a $90 order of teas I want from 52teas! Ack! But I’ll hold out and wait until my sample box from LiberTEAS arrives in case she sends me a sample of one of them.

Hahaha, at $9 a pop the closest I could get would be $54. But I’d really prefer to sample most of the teas first before committing to 1-2oz. We’ll see! March tea budget is already WAY blown through, and I’m awaiting tea in some form from 6 different people/companies right now :D

Woo hooo – its addicting isn’t it! I am dying to order from two places right now but I need to save what little money I have left for BILLS and FOOD lol.

Yes, I’m in a tricky situation of being a student on a scholarship who gets paid (diddly squat) in a lump sum every 4 months. Yes…. EVERY FOUR MONTHS. It’s terrible. So right now I’m doing alright, but talk to me again in mid-April :|

LOL I complain about only being paid once every month. Hey congrats on the scholarship though! :)

Haha thanks. Makes my financial situation a tad more manageable :)

Additional notes: Dexter sent me some of this one! thanks so much! I had a sample before, but I love it, so I didn’t mind a couple more teaspoons. :D This one needs to be TAMED though.. it’s a bit TOO spicy with all that cayenne at times so I mixed it with some Harney’s Valentines. Extra chocolate! Extra yum! It did give me the idea that I should have some cayenne on hand to make all of my chai blends spicier. On an unrelated 52Teas note… I keep thinking of the Lemon Meringue chai and I would buy it in a heartbeat if Frank reblended it… especially with more lemon and mallow root. I’ve got two teaspoons left but I’m treasuring it!

If you haven’t already, check that you’d buy more if he reblends it on the site. You’ll get a note if/when he does, and he did quite a few these past three or so months. Plus, he’s got all of the special blend orders from his Kickstarter project, so one of them may get covered by your request.

I think I already did sign up but thank you for giving me hope that it will be reblended! :D

Whoa there! Quite the spice in this one!

On first smell of dried and brewed tea, it just smells like a chai, with a bit of chocolate. Maybe a bit peppery, nothing I would say was out of the ordinary.

On first sip, initially there is the sweet chai, not a whole lot of chocolate, then the pepper hits. Like hits as in shoots up into your sinuses burning its way through the back of my palate – Hello Prairie Fire (tequila and tobasco, ha ha)!

This is not a bad tasting blend. I consider myself a spicey person but I am not enjoying it in this tea. Its just a bit too much kick at the end of the sip. I think I would have enjoyed it better if it was spicey the whole way through.

Another very generous sample from Azzrian. Thank you!

In a past log, I gave MarketSpice’s Seattle Spicy Chai a fairly favorable rating. It was really an eye-opening experience for me. One, simply due to the level of spicyness in that tea. Two, it was the first really spicy tea I had ever tried. I had a few masala chais before that had ginger and peppercorn in them, but never anything that really made me say WOW, SPICY! So it was very eye opening. It was almost like a punch in the face ;)

So I gave it a very high rating. Maybe it was naive, but it felt right at the time.

This blows it out of the water. Like fishing-with-dynamite kind of out of the water. The flavor on this tea is astounding. The cayenne pepper really takes a front seat in the class, puts its hand up and just starts BEGGING to be called on. Its fantastic. The chocolate notes follow shortly after, and are very malty and smooth, especially compared to other teas I’ve had with chocolate in them. The ginger and cardamom peek in just after that, and its all finished off by a soft spoken almond/cherry affair.

On a somewhat interesting personal note, my taste buds have always had issues with almond/cherry flavoring, they’re basically indistinguishable to me for some reason. This makes most things that are supposed to taste like almonds taste TERRIBLE, and most things that are supposed to taste like cherry be, well, fairly tame rather than overly fruity. This blend plays a similar trick, but the cherry-ness that I pick up (both scent and taste) work well with the other flavors, mainly the chocolate. Rounds out the whole experience quite well.

Another interesting trick… with the Seattle Spicy Chai… the peppercorn flavor really… you really get used to it fairly quick, and the spicy isn’t as spicy once you get a few sips into the cup. The cayenne, while maybe not as big of a shock to begin with, doesn’t lose any of it’s potency. It stays just as powerful all the way through (or at least through the eight or so ounces I’ve drank so far). Plus, because it’s more long-lasting than upfront, Missy enjoys it more. Bonus!

This is totally going to replace Seattle Spicy Chai as the spicy tea I keep in my cupboard. Thanks again for this sample Azz, it really is wonderful!

I have to second the thanks Azz. This is a wonderful tea. Now I can share the spicey tea with him. Yay!

Sounds very good. I have been looking for a good chili chocolate tea ever since TG inexplicably discontinued theirs.

I also tend to think almond extract smells (and to a lesser extent, tastes) like cherry. For me, this works out because I love it. And cherry chocolate chili is a great flavor combination-I’ve had just such a candy bar.

Yeah, I definitely want to order some, so I hope he keeps it around. I think it will probably be awhile though… not sure how much I’m going to enjoy a tea like this during the summer!

I just ordered my second pouch of this, and I got he 4oz size this time! It really is a fantastic tea, just spot on.

This cup smells really good, like cinnamon on a deep base. Very comforting and reminds me of being bundled up inside during winter. It’s the end of August and still hot as hell here in Texas, so I think I’m wishfully projecting a bit!

First few sips were a little bitter with a nice spicy warmth. I steeped it on the concentrated side so I could add cream or ice and I chose to go with cream. The cream knocks out the bitterness and I assume mellows out the spice a little, but not by much. I’m left with a mild burning in my mouth and I do love a good burn! I’m really not picking up much chocolate. This bag is on the older side and the 52teas flavors don’t seem to hold up well over time, so I’m guessing that is what is going on with the absent chocolate. I’m not taken by it.