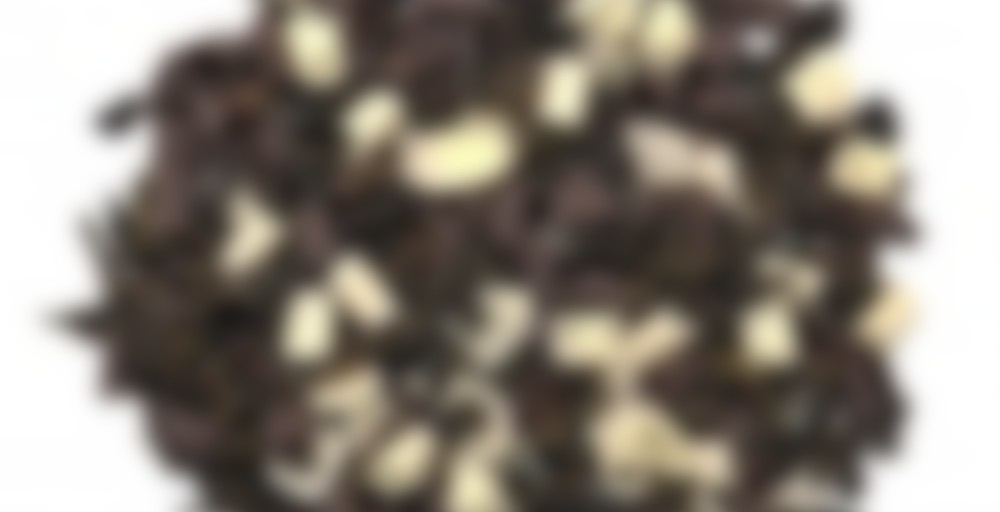 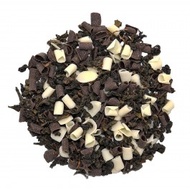 by Nature's Tea Leaf
80
You

Nature’s Ultimate Chocolate Oolong Tea is an exclusive blend of select oolong tea leaves with a duo of rich Belgian chocolates. The oolong leaves are naturally withered under the strong sun, and wrap rolled into small beads giving this tea a roasted aroma. A blizzard of sweet creamy white and rich semisweet dark Belgian chocolate curls are expertly combined to provide the drinker with the ultimate chocolate tea experience.

Finally had the time to try this one. I added a scoop of leaf to the press and added water. The awesome chocolate (I know ‘cause I picked some out and ate it) melted fast. I looked at the remaining leaf and thought oh that’s not enough. I added more. I forgot this is oolong. It expands. So, my press runneth over with leaf. Not really but it was a lot of leaf.

I didn’t care for the first cup. The taste was heavy on the roasted oolong. The chocolate was light in comparison. It was probably because I used too much leaf or because the three minute steep is too long.

The second cup at two minutes was really good. The oolong to chocolate balance is excellent.

The third cup was a little lighter but similar to the second. Now that the roastedness has calmed down I can taste the floral oolong in the aftertaste.

Watch your steep time on the first cup and this is pretty tasty.

Bahaha, “my press runneth over with leaf”. Yeah, that’s like the time I brewed up an orange oolong from Della Terra at my boyfriend’s house, and didn’t notice that it was a rolled oolong (I must have been tired). And as I find their teas weak sometimes, I added extra leaf. Imagine my shock when I returned after a 3-minute infusion to find my entire infuser basket completely full and overflowing… oops!

I feel guilty when I mess up and use way too much leaf. It feels wasteful. However tightly rolled oolongs are hard to judge without a scale.

Yeah, me too. My cup wasn’t even drinkable… it tasted terrible, and then I didn’t want to re-steep. What a waste. (I probably could have diluted it, but was lazy.) Usually with oolongs I just go with a tsp and a half and it typically works ok, but to make matters worse, my boyfriend has no measurement devices at his place, so I was eyeballing to begin with (and apparently I’m quite bad at that!)

Ha. Apparently, me too.

thanks so much Naturestealeaf.com for the samples! Always appreciated! I LOVE their Chocolate Midnight Black tea, and this one has the same chocolate shavings, so I thought I’d try this one too. I steeped for 3-4 minutes. Looking at the cup, it looks so creamy from the chocolate shavings that it looks like I added cream or milk! Peeking in my infuser, the many white and dark chocolate shavings are now melted, so the second cup should be like a normal oolong. The oolong leaves are so dark, you’d think it would taste like a dark oolong. This one doesn’t, though it is hard to describe… it’s a lighter flavored oolong with the sweetness from the chocolate. It seems more white chocolate than dark.

Second steep // 4 mins at boiling // This steep was better! It seemed like all of the white chocolate was gone in the first cup (but I could have swore all the dark chocolate seemed like it was gone too when I looked in the infuser) but in this steep, the chocolate and oolong have melded together into a better flavor. It seems darker somehow and a better match. I don’t know what happened… the boiling water? The leaves opening up more? It seeming less like cream from the white chocolate? Hmm. It’s also odd that this oolong doesn’t have the flavor of any other oolong I’ve had. It’s doesn’t taste roasted, peachy, floral or vegetal, though I guess it did have a vegetal flavor for a second in the first steep. I mean, I had a roasted oolong a couple days ago that tasted like charcoal, and this one doesn’t taste like that. I’ll have to try some more later. It definitely doesn’t taste like the Tiekuanyin that is also delicious from Nature’s. This blend doesn’t come close to the perfection that is Chocolate Midnight Black… but give both of them a try!

I agree the second steep was really good. The sample I had was very roasted on the first steep. I had to work at leaf/temp/time to get a good cup. Strange. I wonder if they toned this one down.

Well, it might just be because I had an roasted oolong that tasted like charcoal a few days ago… maybe that is what I expect from a roasted oolong now. Not sure!

That’s what this one was if I wasn’t careful with it.

I’ve been enjoying oolongs greatly recently, so I chose this one from TSTTB (that Tea Sipper’s Traveling Tea Box) for my tea at work today. I’m also a chocoholic, no explanation needed ;)

I am finding this to be a really interesting experience! The chocolate is lightly present and then the oolong sneaks up behind the sip and spreaaaaaaads through your mouth. It has a stronger flavor than the chocolate I feel, and it is a darker one. Quite yummy.

I find I’m enjoying the second steep with less chocolate and more oolong even better. They have reversed positions, and I taste roasty oolong, then a hint of chocolate on the end of the sip. Nice! I also had a croissant with it which was just about perfect pairing-wise.

There is one more serving in the bag, and I am going to put it back into TSTTB so that another person can enjoy this. Make sure you stick around for the second steep — it’s swoonworthy! It is also making me excited to try the dark and handsome wuyi ensemble from Adagio that I grabbed from the box. Soon, soon.

I agree, the second cup is the best. Chocolate teas are always so muddy looking but the taste of this one is worth the mess it makes of my press. Almost had it today but I am still in sip down mode.

I thought the second cup was better too!

I often find that chocolate teas don’t quite live up to their name. Chocolate flavoring, artificial or natural, just never seems really chocolatey to me. So when I reach for a chocolate tea I usually just wind up having hot cocoa instead! So how do you fix that? Well, add chocolate to your tea, which is exactly what this blend is!

This still isn’t as chocolatey as hot chocolate, but it’s close! And unlike hot chocolate, it’s not one dimensional. The oolong gives it wonderfully roasty flavor and some soft floral notes as well. And it definitely curbs my chocolate craving with way less calories! I mean I assume there are some since there’s whole chocolate bits in here, but it’s not a powdered sugary slurry. Thanks Nature’s Tea Leaf!

I had high hopes for this one. I have been off dairy for a while and perhaps that is why I was baffled when I tried this and wasn’t as impressed.

It’s sweet, yes, but its kind of reminiscent of stevia and sort of turning my stomach. eeeeek!

This afternoon I had a sudden and overwhelming craving for chocolate. That typically doesn’t happen to me all that often. Even though I had a few squares of chocolate already, I thought that it was about time that I tried this tea. I received it a while ago and just didn’t think that there had been a time that was appropriate to drink this blend.

I was so happy to see that there truly are large curls of chocolate amongst the oolong leaves! Sometimes tea photos are misleading in that they show all of these great ingredients and the actual tea never ends up looking like what was advertised. This tea is a real exception to some of my experience. I would almost say that there is an equal amount of chocolate curls to oolong leaves!

The scent is of a toasty, almost green oolong with just a touch of chocolate in the background. It’s surprising that the oolong steps up to the front after all of that chocolate has melted!

Sipping… What I get first is a very toasty, dark oolong. I do prefer greener oolongs, but this one is not too bad. I was at first disappointed to taste just the rather vegetal roasted oolong, but as I sip I do get a bit of creamy white chocolate. It’s not very pronounced, so you do have to look for it. As I get down to the bottom of the cup, I taste something rather milky and a bit like hot chocolate. It’s not milky so much in texture as it is in flavor. I like it!

I did enjoy this cup of tea, but I wish there could be more of the milky hot chocolate bit and a bit less of the toasted flavor. I would be interested in seeing how this tea would taste with a different base. Thank you very much to Nature’s Tea Leaf for a sample!

I think a black tea base would be better with that, because it just seems to meld better with chocolate. Otherwise I would say rooibos.